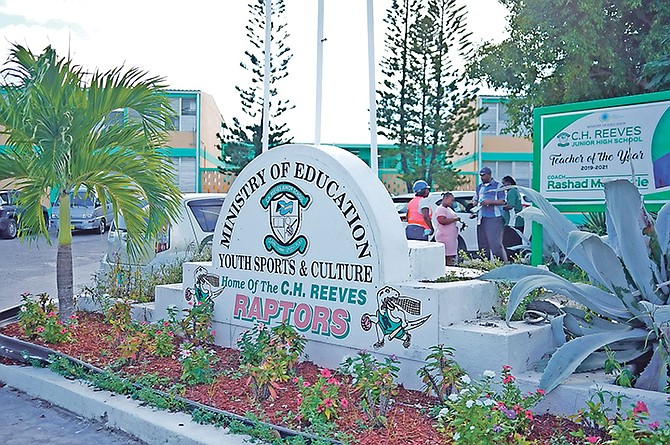 A DISGRUNTLED parent has called for the removal of all the teachers at CH Reeves Junior High School participating in ongoing protests.

The parent, who preferred not to be named, said last year the teachers at CH Reeves had a few sit outs and this year teachers are still refusing to teach the kids.

“If the teachers were really (interested) in doing their jobs they would have taken the kids outside under the tree and teach those kids. When exam time comes around, the kids are going to fail. The teachers are really interfering with their futures dramatically. If the kids aren’t taught, they’re not going to learn anything in school.”

The angry parent suggested the government replace those teachers with educators willing to do their jobs efficiently.

He said: “The government should take all of those teachers and send them to different islands and put new teachers there who are going to teach the kids. Those kids that have to sit BJC and BGCSE exams are going to fail because no one is teaching the kids. No one seems to be concerned. Parents are sick and tired of sending their kids to school every day and they aren’t learning.

“It’s appalling, the parents are becoming very irate and it’s frustrating. This is the third month going into the new school year and we still having this problem. I’m ready to move my kids but it’s the middle of the school year, where am I going to put them? If I could have afforded it God knows I would have put my kids in private school.”

He added: “A lot of parents are feeling the same. It’s not good and they’re not just interfering with these kids’ education. They’re interfering with their future. Quite frankly I’m ready to get the parents together and march in front of that school.”

Speaking to reporters at CH Reeves Junior High on Friday, Mrs Wilson noted that the union’s decision to take matters to court is a response to the outstanding concerns highlighted by teachers at the respective schools.

“For eight weeks now, teachers (at Carlton Francis Primary) have been reporting to work and locked out of the gate with police presence, security officers and so they have not been allowed on their jobs and their salaries have been cut,” she said.

“And for CH Reeves, we’re dealing with health and safety of the teachers and the students and their salaries have been cut… (So) on Monday morning, we will go to the Supreme Court and we expect for the justice system to work for us.”

Last month, Minister of Education Jeff Lloyd told reporters his ministry is seeking to resolve whatever outstanding issues the teachers have.

I was wondering how long it would take for parents to demand more from these teachers. It's a shame that it has come to this. Shame on the teacher's union and its leadership for this. It's time for the students and parents to take a stand!

If parents were really concerned, these school principals, teachers and support staff would have been accountable ..... but everyone sitting back waiting on Big Government to solve the problem.

We have become a bunch of brainless, tech-addicted fools looking for the next viral video.

Parents have to parent ........... It starts with holding your children and their education sacred.

**Parents do not invest time in their children’s studies, and so the children invest time in everything else but their schoolwork. To the extent that a child grows up seeing school as something he has to go to because it is the law of the land, as opposed to seeing education as the food without which he will live a starved life, will be the extent to which our schools turn out Bahamians year after year who cannot compete in the job market and who struggle to see their way clear to a better life.

Too many parents dress up their children, but do not teach them manners and respect.

Too many parents buy their children expensive gadgets, but do not go to PTA meetings, orientation exercises, extracurricular activities or PT conferences.

Too many parents will take their children shopping in the USA, but they won't take them to the Family Islands to allow them to learn about their country and their family roots.

Too many parents will sign up for private or government loans to send their children to US colleges, but they will not encourage them to come back and build their country after graduating.

This is what is wrong with most of our Bahamian parents in the education system.