Insight: Cry For Haiti But Un Is Start Throwing Stones At Us 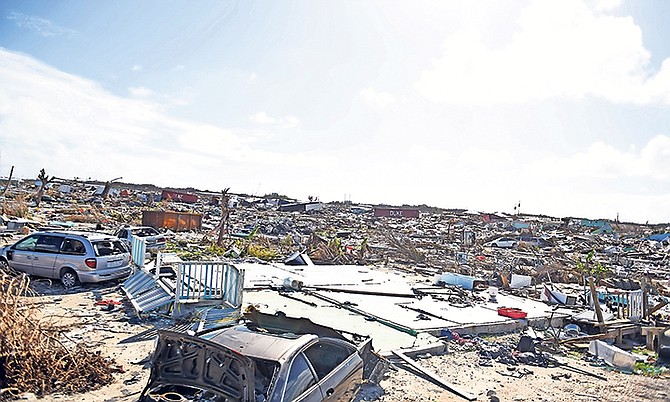 Every other week there’s some demand from the UN – this time, from the High Commissioner for Refugees - so what should The Bahamas, a nation still reeling from the devastation suffered at the merciless hands of Hurricane Dorian, do as it relates to upholding our immigration policies? Considering the disastrous state Haiti is in right now - its democracy threatened daily through violent protests demanding the resignation of President Jovenel Moise - it is absolutely understandable that no sensible person will want to go there.

These circumstances are unfortunate. Still, a modicum of fair-mindedness should be expected when you also look at what The Bahamas has experienced, the longevity of our immigration issues and what it could mean to regularise all Haitians that were living on Abaco when Dorian made landfall, documented or undocumented.

It is no secret that many of those who fled the washed-away shanty town communities on Abaco would have broken the law by illegally landing in The Bahamas. Now, the government, after placing a moratorium on deportations for the first few weeks after the storm, is fully within its rights to resume expulsions following its official immigration policy.

Even as Bahamians have received gracious treatment from our American brothers and sisters, President Trump has stated explicitly that temporary protected status will not be given to Bahamians displaced by the storm.

In case we missed it, have there been any representatives from the UN condemning Trump’s decision? I didn’t think so either – which is why it is interesting the UN would remain so insistent on The Bahamas, a country with a hard, uphill climb to return to normalcy, take on a burden that has, in part, made the task at hand even more difficult.

With the official death toll sitting at 67, hardly a soul in the country believes the actual number is anywhere in this vicinity.

You would recall last year, the Shanty Town Action Task Force reported on the population living in the Abaco shanty town communities. It was determined that 3,500 people – 80 percent of whom had legal status to reside in the country – were spread across The Mudd, Pigeon Peas, Farm Road and Sand Banks. Seven hundred and seven of the shanty town residents were undocumented migrants, which it may be safe to assume had increased in number by the time of the storm.

The state of these homes were barely liveable at the time, and as was identified by the images of the storm’s destruction, not much was left standing in the hardest hit areas.

Sadly - with no shortage of stories of the hardships of survivors unsure of how they’re going to rebuild their homes, reunite their families and recover from the trauma they’ve experienced - it is incredibly odd that the UNHCR still expects The Bahamas to play the role of saviours when the entire country is in a state of distress.

At this point, it is not even a question if we should be good Samaritans or not. We simply aren’t in the position to do so.

Any country in the world that loses 15–20 percent of its revenue in the space of 48 hours will be pushed to the brink, much less our country – due to our heavy reliance on tourism dollars. While we are in a much better position than many other countries to bounce back with time, the UNHCR’s callous expectation for The Bahamas to set a dangerous precedent of regularising all Haitians that suffered from Dorian should be dismissed outright.

Besides, the UN’s mandate, “to maintain international peace and security, developing friendly relations among nations and promoting social progress, better living standards and human rights”, should have led them to advocate for the countries that share the responsibility for the dilapidated state of affairs that exist in Haiti.

Having been nothing more than a geopolitical prostitute – especially for France, its colonisers – responsible for driving Haiti into a state of poverty - and most recently, the US, guilty of propping up the despotian Duvalier administrations, and now, the Moise-led government. Yet, its somehow the responsibility of a much younger, less developed nation to foot the bill.

This seems incredibly disingenuous of the UN to allow such out of touch commentary to continue to be given a platform.

“Rather than setting a dangerous precedent by summarily deporting the Haitians, The Bahamas should find a way to regularise their status and allow them to benefit from decent living and working conditions,” said Dr Jeff Crisp, head of the UNHCR.

What does Dr Crisp say about “dangerous precedents” when the next storm comes and we are still grappling with illegal migration challenges? Certainly, he knows that human rights litigators would have a field day with the Bahamian government.

Thus, he is absolutely right. The Bahamas has to be very aware of setting dangerous precedents.

While, we empathise greatly with those in Haiti experiencing these times, we have our fair share of the tribulation on our hands. And instead of the subtle shaming continuing to come from the UN, perhaps they ought to shift their focus to who is really at fault.

Last month, the UN had to end its 15-year peacekeeping mission in Haiti for what was reported to be a lack of resources. Similar reports stated the organisation was so financially cash-strapped they feared they would not be able to pay their staff beyond the month of October – convenient timing as Haiti became even more unstable nearing 500 days of non-stop chaos.

Further, the US, the UN’s biggest contributor, has not paid over $600m in dues, which account for 22 percent of its annual budget and 28 percent of its peacekeeping budget. Yet there’s no fierce condemnation from the UN. Nor is there any arm of the UN advocating for reparations or asylum for Haitians.

The fact is if the much larger countries in the world were held accountable, we could have been discussing a potentially different Haiti right now. But unfortunately, an organisation that knows far better would stoop so low to shift the narrative away from itself and those truly responsible and pressure a little country suffering its own trauma.

The disunity in Haiti is an age-old problem, and its proliferation has been sparked by others not named The Bahamas.

Hence, under no circumstances can the government’s knees buckle under pressure from the international and local organisations asking for it to do more than it should have to. That being said, just as we continue to pray for our country, we must do the same for Haiti.

As it stands for us, The Bahamas is a country of laws. Once we execute our immigration policies lawfully and humanely, we should all be able to sleep at night.

In the meantime, the prime minister and minister of foreign affairs need to work along with CARICOM to stress to the UN the importance of those with greater culpability for what has taken place in Haiti to be held accountable.

CHRISTIANA, Manchester — Just as they did in late 2016 after Hurricane Matthew struck Haiti, students and staff of the Christiana High School have raised money among themselves to assist The Bahamas which was devastated by Hurricane Dorian in early September.

Christiana High School teacher, Crystalgaye Morris-Buckle, told The Jamaica Observe Central via e-mail that a coin drive carried out over a two-week period raised $50,000 for the relief fund.

“The children really wanted to bond together and give in whatever way they could,” explained Morris-Buckle who was among the lead organisers.

The money was handed over to representatives from the Office of Disaster Preparedness and Emergency Management (ODPEM) recently.

The author is absolutely correct. The Bahamas has done enough. Time for the UN, France, the US, and if you insist, Jamaica to “spread the love.”

Like Haitians, Jamaicans have benefitted substantially from Bahamas. Its nice to see this very small group by comparison, reciprocating. But it would be interesting to know if all of the $50,000 (JA dollars?), actually make it to Bahamas. But the gesture of these children was not lost on me...I appreciate their efforts.

Well stated and articulated Mr. Malcolm Strachan, we as Bahamians have to put the oxygen mask on us first then on other, so right now the UN has to clean their doorstep first before telling us what to do.

The illegals do not show themselves so the task force report is dead wrong it is a lie Mr Crisp dare not speak against the USA President. so he bullies the Bahamas.

The Bahamas has enough problems of its own, Many are unemployed and many will not be able to rebuild their homes. It has not all hit home as yet.

The Bahamas can not take care of Haiti's never ending problems. Mr: Crisp should go to Haiti and see what he can do to help Haiti.

It will be sweet irony if climate change really does cause extensive seal level rise, as our nation has very little land much over 10’ above high tide. If climate change is as they claim, and sea levels rise as they project, or descendants might be forced to seek high ground in Haiti in 100 years or so, as our islands are taken back by the sea!

Lol, I agree with you. He better shush!

Black Haitians can't even get in those mountains. Hispaniola may have the highest mountains in the region, but that does not say much. If we are selling out the country based on climate change predictions, might as well let the other country on Hispaniola fish our waters dry. Predictions also hold that the entire Caribbean will be wiped out soon after The Bahamas.

Mr. Stachan, you are exactly correct. An honest history lesson would show clearly why Haiti is in the state that it is in.