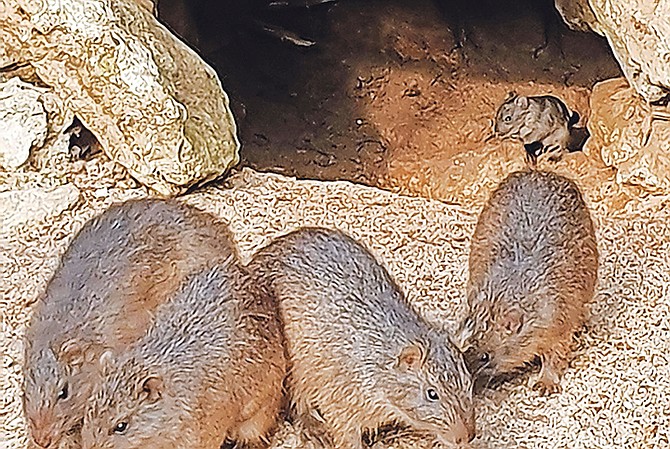 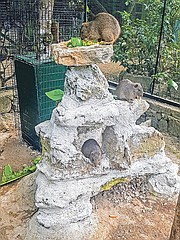 AN endangered species is getting a new chance at survival thanks to the birth of two new baby hutias at Ardastra Gardens zoo.

The rabbit-sized rodents are the only land mammal native to The Bahamas – and come originally from Warderick Wells Cay in the Exuma Cays Land and Sea Park.

The mothers of the two new babies, Coral and Sunny, were brought to New Providence last November, along with three males, Junkanoo, Warderick “Ricky” and Raphael.

Animal curator Bonnie Young said: “We haven’t been hands on with the babies yet so we’re not sure of their sex.”

“Most animals, when they make a move to a new area or are adjusting to a new habitat, it places stress on them. We really didn’t expect to start our breeding program until next year. We thought it was going to take them about a year to settle in and get used to life in the zoo, but they had other plans,” said Ms Young. “They apparently like the zoo, the cleaning service and the company that they are keeping.”

The first baby was born in July and the second in late August. Unlike other rodents who have multiple births, the hutia bears one live young at a time after a pregnancy lasting between 85 and 120 days.

The hutia is considered an endangered species and is protected by law. After being a food source for the Lucayans in years gone by, they were thought to be extinct until being rediscovered in 1966 on East Plana Cay, an uninhabited island east of Acklins.

“The Bahama hutias are now only found in the wild on two islands,” said Ms Young. “If one of those islands had been hit by Hurricane Dorian, they might have been wiped out completely.”

The hutia babies are scheduled to have their first real human interaction, a doctor’s appointment, sometime this month. The vet check will reveal their sex.

“Whenever we have animals born in the zoo, we try to intervene as little as possible. Their best chance at survival is always going to be with their parents. As a prey animal, any type of handling could be very stressful for the animals and very risky for them, particularly with young babies,” explained Ms Young.

“We want to make sure they have a very good start to their life and intervene as little as possible until later in their development when they are sturdier.”

Okay, when's a Rat, not supposed be a Rat?
How say this comrade is left alternated between laughing and not understanding, what hell I just finished reading, We haven’t been hands on with the babies yet so we’re not sure of their sex”- all whilst maintaining me correct bloggers composure, yes, no .... Can't just have made this story up- test Tribune readers, sense of humour .....Plana Cay's, remaining uninhabited island hundreds years is well justified ....