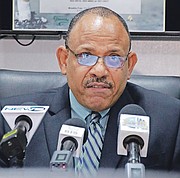 WITH full remediation of the Rand Memorial Hospital expected to be completed by next year, Health Minister Dr Duane Sands said the government has already made plans to repair health care facilities in Abaco, which also suffered significant damage during Hurricane Dorian.

Speaking to reporters at a medical symposium hosted by Healthcare Associates Training &Tempo Centre on Friday, Dr Sands noted that damage to health care facilities in Abaco were not as severe compared to those in Grand Bahama.

“In Coopers Town, we have significant roof damage and flooding issues. We have had destruction at Hope Town and Green Turtle Cay and other areas (but), Abaco is actually not as seriously impacted in terms of the healthcare infrastructure," he said

“The damage to the Abaco facility was more a consequence of the fact that it had to be used as a shelter and significant damage was then caused as a response or as the facility was being used subsequent to the storm.”

The powerful Category Five Storm tore through Abaco and Grand Bahama in early September, destroying medical equipment and facilities on the island.

As a result, Dr Sands told reporters in late September that the cost to repair both the Rand Memorial Hospital and Marsh Harbour Clinic would be around $20m.

Health officials have since predicted the remediation of the Rand to be completed by March 2020.

In fact, on Thursday, the Ministry of Health signed a memorandum of understanding with Carnival Corporation & PLC to support the restoration of the Rand Memorial Hospital.

This partnership will provide funding for flood damage repairs and will assist with the replacement of damaged medical equipment at the Grand Bahama hospital.

As for the restoration of health care services on Abaco, Dr Sands suggested that the government remains fully committed to the remediation of medical clinics in Abaco.

"We have a robust plan for the restoration of the clinical services in Abaco, all the way from Grand Cay to Sandy Point.”

“The approach to the rebuilding in Abaco has been an holistic programme. It involves a new clinic at Moore’s Island, Green Turtle Cay and dramatic upgrades to the Marsh Harbour (clinic), Hope Town – brand-new clinic funded by the residents of Hope Town,” he said.

“We now have formal proposals to design and build and fund replacement clinics for at least three clinics in Abaco. We have partnerships for the repairs of the Coopers Town Clinic. We have already deployed several ambulances to Abaco.”

Dr Sands added that the government, in partnership with The University of Miami, has also made plans to introduce trauma services, CAT scan services and urgent care services at the Marsh Harbour Clinic.

And the next step, as noted by the health minister, will be providing living accommodations for the medical staff.

“What we now have to do is provide safe, comfortable housing whether it be RVS or temporary structures for our staff to be able to consistently remain in Abaco. We also intend as the population returns to provide home-care in Abaco," he continued.

"I believe we’re going to emerge from Dorian better than we started. It is said you should never waste a crisis and certainly in health, that is the approach that we’re taking," he said.

Granted, whilst not at top the party's likes but still sometimes has go with what you got's work with - could the possible packaging comrades Dr. Duane and Dionisio James - not necessarily in that particular order - be the after Minnis ones parachute into red shirts party's still occupied PMO and DPMO, yes, no ....