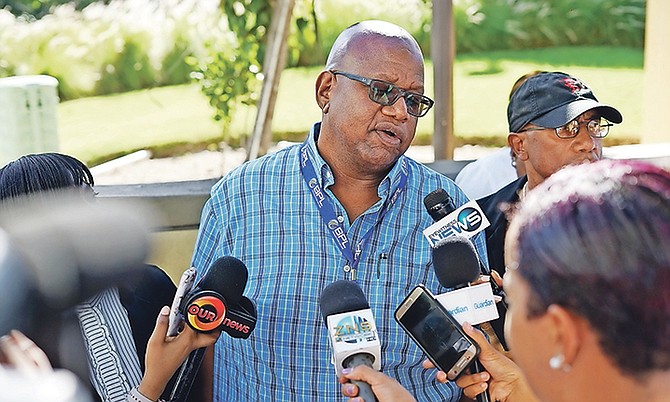 Paul Maynard, The Bahamas Electrical Workers Union’s (BEWU) president, told Tribune Business that bill-ducking customers will be in for a culture shock as they will no longer be able to rely on friends, family and political connections to escape cut-off once the rate reduction bond issue is placed in January 2019.

He said it was inevitable that BPL will now have to “tighten up and run properly”, especially when collecting the rate reduction bond (RRB) fee that consumers must pay, since this will be demanded by financial institutions and other lenders who agree to purchase the bonds.

Warning that failure to properly collect could result in a default on the bond repayments, which would then enable the lenders to seize the “property” pledged as security/collateral for their investment, Mr Maynard said this would also have the effect of compliant BPL bill payers “carrying” the financial burden of servicing the debt.

Describing the proposed BPL refinancing as “a big gamble”, the line staff union chief said it was critical that the Government - as well as the state-owned utility monopoly’s Board and management - provide specific details on what consumers can expect.

He argued that Bahamians “don’t mind paying” extra as long as they are convinced there is “value for money”. In this case, Mr Maynard said it meant BPL eliminating the summer’s daily blackouts and outages through greater reliability and, ultimately, reducing electricity costs to the extent that this offset the RRB servicing fee and lowered customers’ total bills.

“They [the Government] need to clearly define what they’re doing and how they’re going to do it, what the company projects and how much extra per month the consumer will have to absorb.

None of these details, especially the amount of the RRB servicing fee that BPL’s household and business customers will have to pay, has been disclosed publicly yet. The Government will likely argue that such details are presently unknown and being worked out, given that senior BPL executives and those representing the vehicle that will issue the bonds were in New York last week.

The group, including Dr Donovan Moxey, BPL’s chairman, and Geoffrey Andrews, head of The Bahamas Rate Reduction Bond Ltd vehicle, were in the city to meet with financial institutions and major investors in a bid to work out the bonds’ pricing and other conditions and terms that will be attached to their issuance.

Mr Maynard told this newspaper that the servicing fee had initially been proposed at three to four cents per Kilowatt hour (KWh) when BPL’s bond refinancing was first conceived under the former Christie administration.

“That in and of itself is fine,” he added, “and if you reduce the price of electricity by half people won’t have a problem with that.” However, besides the actual size of the RRB fee and the date when it will first be charged, it is also unclear when BPL customers can expect to see a fall in their electricity tariffs.

BPL, and the Government, will likely be hoping that its new 132 Mega Watts (MW) of generation capacity via Wartsila, and the planned Shell North America multi-fuel plant that is due to be constructed and operational by 2021, will reduce fuel and other costs sufficiently that this more than offsets the additional bond servicing fee added to consumers’ bills, resulting in a net decrease in electricity costs.

The Wartsila engines are supposed to come into service by mid-December, and it is likely that this timeline - and the hope they may produce some lowering of customer bills - together with Hurricane Dorian’s impact pushed the bond’s issuance back to January from the previously-planned November launch.

Desmond Bannister, minister of works, has voiced optimism to Tribune Business that the price (interest rate) attached to the new bonds will be less than BPL is paying on its current $321m debt despite the absence of a government guarantee. Yet observers, including Mr Maynard, have expressed scepticism that the Wartsila engines will be ready by mid-December.

And the union chief also agreed with Tribune Business’s analysis that failure to crack down on BPL’s delinquent bill payers will penalise compliant consumers by resulting in higher bond servicing fees that the latter will increasingly be relied on to pay. A “back of the envelope” calculation by this newspaper, assuming a 6 percent annual interest coupon for the bonds, shows that BPL consumers would have to come up with an extra $39m collectively per annum to service the debt.

“The other thing they’ve got to do is get the consumer to pay their bill and, if they don’t, turn them off,” Mr Maynard told Tribune Business. “You have to have a system where you turn people off unless they pay. People can’t continue to run bills up to $3,000, $4,000, $5,000.

“You have to make sure your receivables are tight. You have to tighten up. If people don’t pay their bills for two months you have to collect or turn them off. You can’t have money outstanding. Otherwise people paying their bills are the ones who are going to be carrying the rate reduction bill as you have to get so much per month.

“You have to tighten up the situation and run properly. If you don’t run properly you’re in trouble. That’s the problem.” Describing BPL’s accounts receivable woes, with between $90m-$100m owed to the utility at one time, as “terrible”, Mr Maynard added: “You’ve got to pay attention to it.

“If you have a consumers that does not pay their bill, and has not paid for two to three months on that bill, you’ve got to collect. This one and that one going to friends, that has to stop and you have to be serious about it. They have to, or the people lending the money are going to take over the security.

“This could work, but your situation has to be very tight. You have to have very serious, stringent collection systems. The buddy-buddy system is not going to work any more.” On that point, at least, Mr Maynard and Mr Bannister appear in agreement.

The latter told Tribune Business last week that the state-owned utility monopoly had to “be more efficient” in collecting sums owed by household and business consumers so that it is “not a burden” on those who pay their bills on time.

This will become increasingly important once the bonds to refinance BPL are placed, given that the fee customers will pay to fund the interest and principal payments due to investors will fluctuate depending on various factors that include how many are not paying their bills and to what extent.

Mr Bannister yesterday conceded this could penalise compliant consumers, while acknowledging that BPL’s history in collecting sums due was not a good one.

“I’m very concerned, especially for the poor people in this country as there’s only so much they can bear,” Mr Maynard told Tribune Business. “You’re going to have to have town meetings to educate the consumer. Hopefully it will work. It’s a big gamble they’re taking, a very big gamble. That’s the problem.”

From the way the story is written, losing the political protection subsidy is indeed a great loss. Perhaps the sweethearts are so strong that they will stop the deal.

Also, if the electricity is cutoff, the bond charges should continue while it is off. And should not stop until the account is closed.

Paul Maynard, The Bahamas Electrical Workers Union’s (BEWU) president, told Tribune Business that bill-ducking customers will be in for a culture shock as they will no longer be able to rely on friends, family and political connections to escape cut-off once the rate reduction bond issue is placed in January 2019.

Wow! Maynard just outrightly and unabashedly announces the existence of the 'do-not-disconnect' corruption that still exists even under the Minnis-led FNM government. Yet no one has gone to prison for the theft of electricity or aiding and abetting the theft of electricity. This simple fact alone should tell potential buyers of the rate reduction bonds that BPL's projected revenues will fall far short of the amounts that the government and BPL have promised would be available to meet the obligations to the bondholders as and when they come due.

Our Minnis-led FNM government has likely undertaken to introduce policies (e.g. outrageously high customs duty rates on solar power systems, etc.) that would make it almost impossible for the vast majority of BPL's customers to be able to afford to switch-over to their own much more economical source of solar power, with the possibility of selling to BPL excess solar generated power they don't need for themselves.

The government's new anti-solar policies would likely be necessary to try keep as many customers as possible on the very costly BPL grid, notwithstanding the outrageously high (and likely unaffordable) rates BPL expects to soon start charging its customers. That way BPL could have a better chance of achieving the targeted annual revenues that both BPL and the government have promised would be available to pay the exorbitant interest and principal amounts that will be due to the buyers of the rate reduction bonds. But as they say, blood can't be had from a dry stone!

And to think all of this is going to happen just when many of BPL's residential and commercial customers were hoping they might be able to switch-over to their own solar power systems as an economical means of getting around BPL's absurdly high electricity rates and unreliable supply of power.

How did the electricity consumer become responsible for the mismanagement and corruption at BEC? What if the consumers agreed with one voice and said NO we will not pay the new interest tax? Would BEC shut the nation down? But we are a passive people that don't stand up to injustice... so let's suck our teet anew and pay the new tax on behalf of those who stole the money and mismanaged the public company. To the degree we don't stand up...we by choice bend over and take it....once again. Our passivity keeps us enslaved to fear, resulting in abuse by corrupted public servants. In ten years we will tell the same story again.