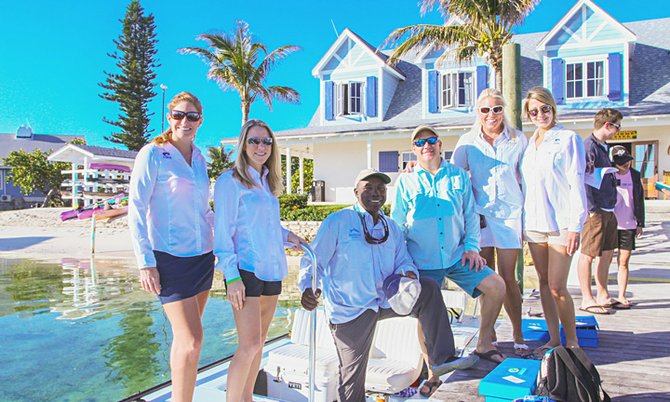 Amanda Perryman, Pro &Conservation Program Leader from Costa Sunglasses (left), is pictured along with her team, their Deep Water Cay guide and Bill & Lisa Culbreath, Deep Water Cay Resident Managers. Bill Culbreath was pleased to have been the chosen property for the winners “It is wonderful that Deep Water Cay was promoted to such a large audience in the US,” he said. “At our closest point we are a quick 40-minute flight from Florida and our private airport is a wonderful bonus for those who can charter straight to the cay. We hope that this additional advertising will help promote our cay and the beauty of Grand Bahama.”Photos: Keen i Media for Barefoot Marketing 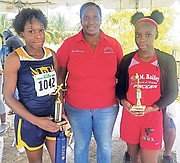 THEY had a change in venue, but the competition was just as keenly contested this time around as the Government Secondary Schools Sports Association hosted its annual Cross Country Championships outside of the Thomas A Robinson National Stadium.

Saturday’s event, which was hampered by the downfall of the rain, featured competition for boys and girls in all age groups, including the under-13, under-15, under-17 and under-20 divisions as the GSSSA crowned both the individual and overall champions.

“This was our first time doing our cross country at this location and so far, it has turned out to be the best, although we had some rain,” said GSSSA president Varel Davis. “It’s an open atmosphere and the kids are really enjoying themselves.”

It was estimated that atleast 350 athletes participated in the event, which Davis said could become the site for them to utilise in the future.

Crestwell Farrington, an 11th grader at CR Walker, came from behind in the last of the three laps to secure the win for the CC Sweeting Cobras in a time of nine minutes and 53.96 seconds.

Valentino McDonald of the Anatol Rodgers Timberwolves came in second in 9:52.12 and Dino Desamours of the CR Walker Knights got third in 10:16.26.

“It was very hard because I had a lot of competition from the guys who were behind me,” said Farrington, who improved on his second place finish in the last cross country championships.

“They motivated me and my friends pushed me when I took over on the last lap.” Anatol Rodgers emerged as the divisional champions.

Kimoya Blake, representing the Dame Doris Johnson Mystic Marlins, pulled away from the field to cross the finish line in their three-lap race in 8:15.62. Her nearest rival was Catherine Thurston of the RM Bailey Pacers in 8:37.71. Brynae Bastian, also of RM Bailey, was third in 8:47.33.

“It was good,” summed up Blake. “The rain soaked my hair and my eyes was running. On the last lap, it started to burn, but it was okay.”

It was the third consecutive cross country victory for Blake, who celebrates her 17th birthday on November 15 with an early present. The 11th grader said she hopes that her performances can transform onto the track next year as she pursues a spot on the CARIFTA team.

The CI Gibson Ratters were the divisional champions.

The first place finisher was Anatol Rodgers’ Wynsome Penn in 9:16.42 with Temetria Rigby coming of RM Bailey coming in second in 9:18.37. Lakeicia Lewis of CV Bethel was third in 9:21.70.

CR Walker were the divisional champions.

The divisional winners were DW Davis.

Carlyssia Armbrister clinched the title for the SC McPherson Sharks in her winning time of 8:34.48. Glenia Goodridge of DW Davis came in second in 8:54.64 and Laquay Kemp of CH Reeves finished third in 9:02.53.