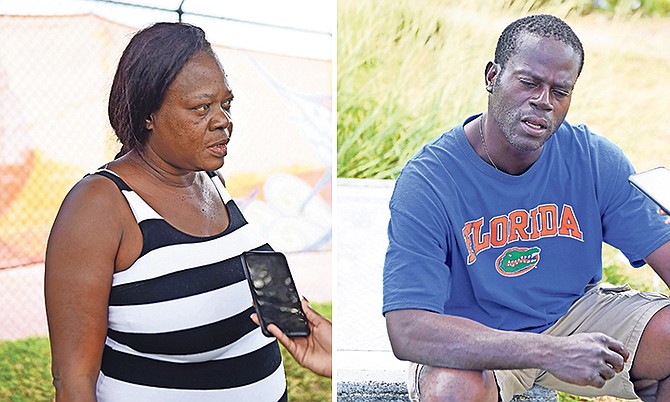 SEVERAL storm victims yesterday criticised members of Operation Sovereign Bahamas for their decision to protest against migrants staying at Kendal GL Isaacs Gymnasium in the wake of Hurricane Dorian, calling the move “disrespectful” and “heartless.”

Ellen Petit, 53, recalled when protesters first visited the gym on Saturday, shouting at them “to go back home.” The protest, which went on despite bad weather on Saturday, Mrs Petit said, brought back harrowing memories of the powerful storm for many hurricane victims staying at the shelter.

“They were (initially) standing where they were selling the food and they marched back. Then they come stand in the rain (protesting) because they saw us outside,” she said. “It put people in tears. Some people said it feel like the storm coming back. It feel like the hurricane. They remembered their loved ones who died in the storm and people started crying. It wasn’t nice,” she added.

“It was not right because what we been through, I think some people should have come out and support us and help us and not protest against us. We had someplace where we were staying, we didn’t mean for (our) house to be broken.”

Some storm victims said they don’t want to return to Haiti because there is no future for them there.

One of them is Merlande Theophile. Mrs Theophile said she has been living in Treasure Cay, Abaco for 17 years without papers.

“I can’t go (back to) Haiti because I have three kids and Haiti is difficult. If we go Haiti, we gone die,” she told The Tribune yesterday.

To help ease increasing tensions in the country over illegal migration, Mrs Petit, who a Haitian-Bahamian, said the government should send undocumented Haitians to Abaco to help with the rebuilding process.

“Them Haitians ain’t lazy, give them a work permit for a year or three years. Then after a year, if they ain’t find someone to renew it then you got to go back. These people have children. Haiti is always at war. They can’t go back,” she said.

Another shelter resident, Eronne Lubin, 46, also criticised the group for the protest on Saturday. Although she was not at the gym when the group demonstrated, Mrs Lubin said when she heard the news, it disheartened her.

“What they did on Saturday was not called for. They should’ve had a meeting or gone to government (in) private. It made them feel bad and even me when I came from the seminar. It makes you feel bad,” she said. “We don’t have no family over here (and) everything we have has been destroyed and if they put us out, where are we going? We don’t want to stay here forever. The only reason we here is because (of) Dorian.”

Another shelter victim, who did not want to be named, added: “I think the protest was disrespectful. We’re all human. We might not have the same nationality, but we’re all human. It’s not only Haitians in there. They have (tents) in the back full of Bahamians. Why they make it seem like only Haitians here? That’s so heartless.”

The gym has been housing storm victims since Hurricane Dorian displaced thousands of residents from Abaco and Grand Bahama in early September.

But, Operation Sovereign Bahamas founder Adrian Francis said his group is pushing for the government to clear out the gym of undocumented immigrants. “We are not trying to denigrate any innocent human beings; at some point we are going to have to get our gym back. Allow them to go home and come back through the front door. If they have no documents, the door is locked, it’s as simple as that,” he said in a Facebook live video on Saturday.

Speaking to reporters on the matter on Monday, acting Prime Minister Peter Turnquest noted that the gym was only meant to be a temporary shelter for hurricane victims and therefore he anticipates that those persons will make every effort to leave the shelter as soon as possible.

Mr Turnquest said he understands the frustration of groups like Operation Sovereign Bahamas, but they must allow the government to do its job.

Two weeks ago, the National Emergency Management Agency said there were more than 700 people living in five shelters across New Providence.

A small group of people showing a total lack of compassion perhaps to further the political oasperations of one of them who wishes to ride a populist wave of nationalism, Sad to see.

Shamefully the colony's comrade elected representatives are permitting individuals still in need shelter to be so verbally abused, yes, no ... by allowing people be mentally abused and pushed into a corner - don't play the Fool at pretending act all surprised at the potential further consequences to come .. Its a given. nip it in the Butt

Nip what in the butt? you must mean nip this illegal immigration problem in the butt! Don't act surprised when the ramifications are felt and seen, as they are now in this country!

Firstly what is a Haitian-Bahamian, you are either a Bahamian or a Bahamian of Haitian descent, if you are going to put another country name before Bahamian then that person needs to go back to that country. I have two children born in Germany and living here are they then German-Bahamian.?

Operation Sovereign Bahamas is exercising their freedom of speech. Rights Bahamas does the same including spewing nasty rhetoric toward Bahamians. What's the issue? Haitians in this gym have also exercised their freedom of speech to international media, or promoted social media stories that paint Bahamians as far worse than insensitive protestors. They have falsely alleged aggression and violence against them since Dorian. Reality must hurt more than fiction, because this should have been an easy day in the life of Haitian in Bahamas.

Something is seriously wrong with us.

Ask them how many children they have each had in the Bahamas since arriving here illegally?! Ask them what gave them the right to enter our country illegally to live off the blood and sweat of Bahamian workers who are struggling under the weight of the burdensome taxes and fees that our government collects from us to pay for all the benefits doled out to these illegal aliens and their many children?!

Our homegrown excrement we call “real Bahamians” is in serious need of gene pool dilution.

Anybody from anywhere will be an improvement.

Look around, it’s only the Haitians that will do any tough or dirty work; without them our country, the Bahamas will be a mess.

@Chucky "Anybody from anywhere will be an improvement."

... well there are more than enough Haitians here, maybe that 's why our economy is booming, crime is low, unemployment is low, government debt is a trifling $20 million dollars and the national grade average is an A . I guess you are right!

Its comical the way some of you pretend that illegal immigrants anywhere in the world, dont take on the dirtiest jobs for the cheapest pay. Its because they are often uneducated, dont speak the language and can thrive in substandard living conditions...not because the native population are lazy or above certain jobs.

What you are suggesting is that Bahamians lower their standard of living to what illegal immigrants are used to at home. This is the only way a Bahamian can compete with a Haitian. It clear that as long as you have your cheap labor, you dont care whether poor Bahamians have running water or live steps away from an open sewer. This is what makes the humanity many of you pretend to have, laughable.

If you go to Haiti I can assure you you will find lazy Haitians, they're not some magical nationality encompassed of only industrious people.

We have just as many and more hard working Bahamians here as they do. The only difference is we're exposed to "all" types of Bahamians but only the desperate persons willing to do anything after escaping Haiti

Excuse you? But the parts of the Bahamas is a MESS because of these same haitians! I bet you have your set who clean your yard for you right because you probably won't do it yourself! How pathetic of you to belittle Bahamians so!

You may as well save your breath 'mangogirl'.....'Chucky' is either of Haitian descent or wishes he was of Haitian descent.....but he's only too happy to be living in the Bahamas as it declines into the kind of country he wants it to be.....i.e. another Haiti.