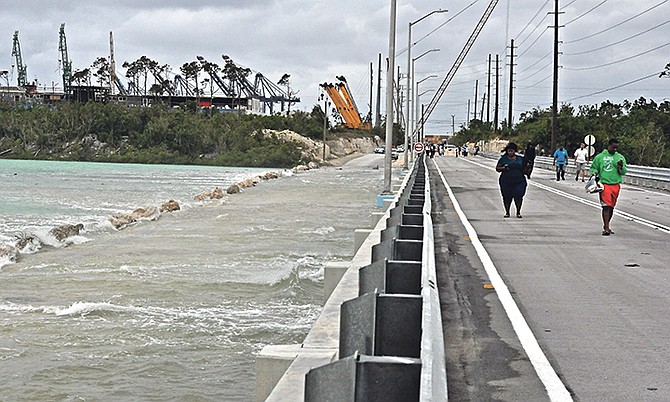 THE new bridge causeway at Fishing Hole Road in Grand Bahama was opened to motorists last weekend after flooding during spring tide brought traffic to a standstill for several hours on Saturday.

Water at Hawksbill Creek overflowed on to the road preventing motorists from crossing over to the other side for around four hours until repairs could be made to the new causeway, which sustained damage during Hurricane Dorian.

Deputy Prime Minister Peter Turnquest and general contractor Wolfgang Geiger, of All Bahamas Construction Company Limited, were seen during a walkabout on the new bridge causeway on Saturday.

Travel was later restored in and out of West Grand Bahama following repairs by the contractor.

According to Mr Turnquest, the approaches to both sides of the new Fishing Hole Road causeway were washed away leaving about a one-foot drop from the bridge to the ramp, rendering it impassable.

He noted that the contractor was called in and responded quickly to making the appropriate repairs.

“Prior to that damage being repaired, we had the storm yesterday that flooded the bypass road leaving traffic at a standstill for approximately four hours while the bridge contractor installed a temporary solution to allow traffic to pass over it,” Mr Turnquest said.

“We are grateful for their quick response to our request and to the Ministry of Public Works (MOPW) and minister of disaster preparedness and reconstruction, the minister of agriculture, fisheries, and marine resources, the MP for West Grand Bahama, and I, who all coordinated together for a quick response,” he said.

Police officers were on hand to ensure the safety of motorists in the area.

The new bridge causeway was constructed at a cost of $6.5m in response to many years of ongoing flooding at Fishing Hole Road, especially during hurricanes and severe weather conditions. The causeway is a narrow strip that runs through Hawksbill Creek.

In response to Saturday’s occurrence, Mr Turnquest said: “Yesterday, we witnessed again the power of Mother Nature and the unsustainable intervention by man that saw the rise in sea levels at high tide beyond the historical maximums, further evidence of climate change and rising sea levels.”

Mr Turnquest said that these consistent occurrences point out the urgency of now in dealing with sea defence and other infrastructure resilience building projects throughout the country.

He indicated that stronger efforts must be made internally and with the help of international partners in prioritising pre-storm resilience projects.

“As we work with renewed urgency towards making the permanent fixes to the causeway, once the analysis of the previous failures have been analysed by the technical experts at MOPW, we will also turn our attention to the West End Sea Wall project and to the High Rock Sea Wall that are so badly needed to protect lives and property.”

Mr Turnquest commended the quick response of the Royal Bahamas Police Force, the MOPW, the contractor, and the coordinating ministries, and the MP for West Grand Bahama.

If they'd just remove the old road and clear the path for water to flow the flooding would stop. But no they had some Kemp Road draftsman do the plans for this idiotic project....

Exactly, built too low, both ends terminate even lower will always flood as they built it far too short, open and deepen the flow from north to south, remove the high north side berm from around Freeport harbor designed to keep locals out, it drives the water into EMR and down town Freeport. I don't know which is worse, no planning (like Nassau) or Bad planning (Port and Government in GB)