Gibson Detective - We Made Mistakes 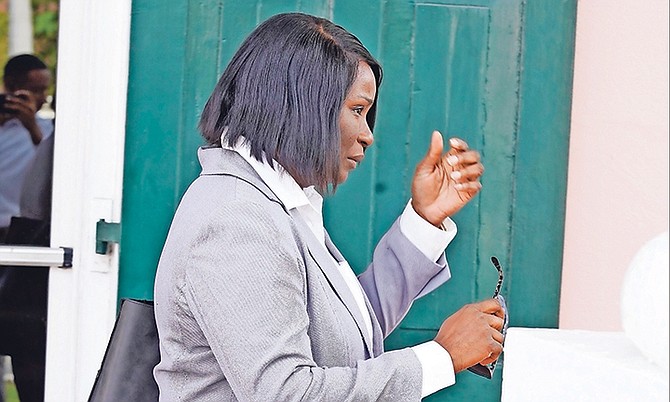 Assistant Superintendent Debra Thompson outside court at a previous appearance.

THE lead investigator in former Cabinet minister Shane Gibson’s bribery case admitted on Thursday she was wrong to have jointly interviewed a local businessman and a woman to “synchronise” their claims against the former parliamentarian.

Assistant Superintendent Debra Thompson said in hindsight, she acted improperly in arranging to meet with both Jonathan Ash and Deborah Bastian to “clear up the ambiguities” in their respective statements against the former labour minister.

The officer also admitted that during the meeting, Mr Ash’s and Ms Bastian’s statements were both altered to accommodate the other, and that whatever parts weren’t in sync were “cut out” and discarded altogether.

That was evidenced in her being quoted as saying during the meeting in question: “I’m going to take some stuff out of it and just clear up one or two points,” as well as “…It’s just up to the part with the meeting now where I got to cut out a lot of stuff surrounding that.”

ASP Thompson also admitted that during the interview, the lawyers for Mr Ash and Ms Bastian, Alecia Bowe and Raymond Rolle respectively, “intervened” on any number of occasions and instructed their clients on how to give their statements.

Despite her claims that lawyers doing so isn’t unheard of, Gibson’s lead attorney Keith Knight, QC, accused ASP Thompson of violating “the principles laid down in the manual of the Royal Bahamas Police Force,” a manual she said she only saw for the first time yesterday.

“You now know that is wrong?” Mr Knight asked.

However, ASP Thompson subsequently maintained that while her decision to hold the interview was inappropriate in hindsight, her reasoning for holding the meeting was not improper.

“It wasn’t wrong. I didn’t perceive it as being wrong when I did it. It’s common for us to have meetings between (two witnesses),” she maintained, adding that the “substantive core” of Mr Ash’s and Ms Bastian’s statements “never changed”.

ASP Thompson’s admissions came moments after she agreed with Mr Knight’s suggestions that one witness statement should not be taken in the presence of another witness, and that witnesses are to give their statements independently.

They also came a day after she admitted to altering the original statement she took from Mr Ash by adding in a pivotal allegation against the former labour minister some three months after it was taken and signed.

At the time, she admitted that the initial June 28, 2017 statement she took from Mr Ash contained no allegations that he was required to “forego” $250,000 in order to be paid the $1m he was owed by the Christie administration for Hurricane Matthew cleanup work.

Instead, ASP Thompson said that allegation was mentioned months later when she met with Mr Ash in September of that year. But instead of taking another statement from Mr Ash, ASP Thompson simply made the change and kept the June 2017 date because the alteration was “minor” in her view.

But despite that, ASP Thompson conceded that the issue of Mr Ash allegedly being required to “forego” any payments was, and still is, an important part of the current case, and further admitted that her actions could have misled the defence.

During Thursday's proceedings, Mr Knight built upon that line of interrogation, and added that her seeking to subsequently “synchronise” Mr Ash’s and Ms Bastian’s statements could have undermined the defence’s case.

“When you synchronise evidence in people giving two different accounts, it makes it difficult for the defence to bore holes because you have it synchronised,” Mr Knight asserted.

However, ASP Thompson responded: “I disagree with you. Like I explained, the purpose of me holding the meeting was to clear up some ambiguities.”

She further explained what she meant by “synchronise”, which was: “I meant, when I said synchronise, it was to clear it up. That’s what I meant by that.”

Nonetheless, Mr Knight subsequently drew her attention to the fact that earlier on in the proceedings, she agreed with his suggestion that what she did was wrong.

However, ASP Thompson maintained that her error only extended to her holding the meeting in the first place, and not to what she ultimately did with the statements.

“At the time I did not perceive it as being wrong,” she maintained. “In my view, I wanted to clear up the ambiguities.”

But Mr Knight insisted that what she did was “dangerous” and brought the entire investigative process “into disrepute”. Mr Knight further asserted that ASP Thompson’s actions were “deliberate” and “calculated”.

“No sir, it was not a deliberate act,” she retorted. “I already explained to you the purpose of the meeting. The substantive core of their statements never changed. They maintained that account. Except for the areas that I wanted to clear up, is where the ambiguities were.”

However, Mr Knight finished his cross examination by admonishing ASP Thompson: “…If you ever have to investigate a case again, if sinners entice you, consent you not.”

Gibson is charged with 15 counts of bribery. The former minister, who is on bail, has denied the allegations.

The case continues on Tuesday.