Teachers Turned Away As They Try To Return To Work 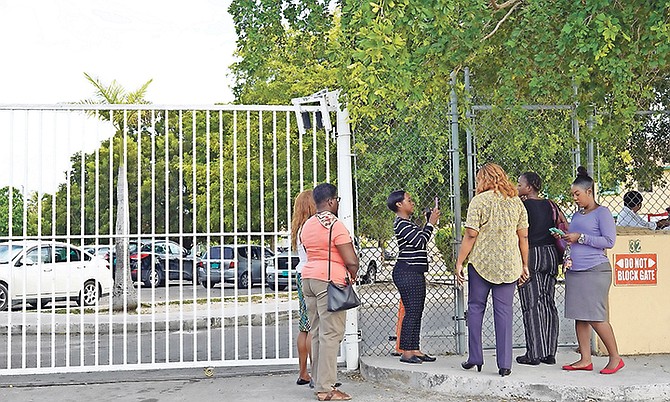 While the Bahamas Union of Teachers was vindicated on Tuesday with a Supreme Court order to restore docked salaries, some teachers were reportedly not allowed back at Carlton Francis when they tried to return to work because they had been transferred elsewhere.

However, Mr Parker told The Tribune yesterday that the Ministry of Education issued the teachers’ redeployment letters late Wednesday, adding the matter will end up going back to court.

“There is a specific procedure under the collective bargaining agreement for redeployment, they (the government) has a right to abridge them to a certain degree with respect to emergencies and certain exigencies. However, the teachers of Carlton Francis rather than being redeployed they were locked out of the school and the question of redeployment came out when we believe the government decided to exercise its power of deployment in the certain circumstances to break out the union presence at the school and to circumvent the collective bargaining agreement in so far as it relates to the court’s judgment,” said Mr Parker.

Ten teachers who reported to Carlton Francis Primary School were not able to return to classes yesterday after the BUT’s victory at the Supreme Court this week. The teachers, who claim that they were not properly informed by the Ministry of Education of their redeployment, view the decision by the ministry as punishment for speaking out.

The BUT’s New Providence Area Vice President Vernon Rodgers told The Tribune that the Ministry of Education did not adhere to the legal process of redeploying teachers. “The letter of redeployment did not follow any of our protocol in the collective bargaining agreement. These letters of redeployment should have been issued from May and given to teachers in June. They give you redeployment letters because you stand against a principal. They want to give teachers letters in October, that’s wrong that’s against union policy. This is a union busting tactic,” he said.

The teachers who spoke with The Tribune say that they faced backlash for speaking up about “victimisation, bullying and intimidation” by the school’s former principal and the ministry. Carlton Francis teacher Wendy Moss said that the Ministry of Education has dealt with their grievances poorly and with excessive force. “When we went to school on September 17, we were greeted with police officers in khakis and machine guns, children were crying because they couldn’t understand why police were there. Sometimes there were seven to nine officers and we’ve been dealing with this over the last several weeks,” the teacher of 17 years said.

Sharon McKenzie, another teacher, said that as a single mother who also has two boys at the school, she is not allowed to take her children to class. She said: “For the record, I have not been scolded as a disruptive teacher or parent at that school. Now since this situation came up I am the only parent that is being escorted by a police officer with a gun and a bulletproof vest to my son’s class. If I have been such a disruptive teacher, why did you have me representing the school for two years?”

Meanwhile, Director of Education Marcellus Taylor told The Tribune that redeployment letters were prepared for those Carlton Francis teachers some weeks ago. Mr Taylor also explained that police presence at the primary school was necessary to maintain order. “Letters were prepared for about six or seven teachers somewhere around September 25 or thereabouts they were issued through the superintendent to the principal of the school who then invited teachers to collect letters, but once they were advised they were redeployment letters then they refused to accept them and continued in their protest. They were redeployed because they were failing to execute their duties at the school and they were creating a nuisance at the school, they were interfering with the smooth operation at the school,” he said.

“At that point we then became concerned about the school’s smooth operation being disturbed because the Bahamas Union of Teachers were going to call in all the shop stewards and their people to come down. So, then we brought in the police to stop persons on the campus from disrupting the operation of the school and that is when and why the police were called in,” he said.

However, Carlton Francis teachers say the record would show that they have been good teachers and received commendations from the former principal.

In addressing the “unlawful” redeployment, Mr Parker has written the Office of the Attorney General requesting a date to return to court and the matter has been sent to the office of the chief justice.

Meanwhile, Mr Parker said that teachers showed up to CH Reeves where there was health and safety concerns. He could not confirm if they were able to enter their classes, but the union is hoping that officials will be able to carry out their inspection at that school.

The work of Mr. Minister of Education who is supposed to be a man of the church.

I don't know no lazy person who gets up 5AM every morning, gets dressed in uncomfortable work wear, sits for minimum one hour in traffic knowing that there's a possibility that the effort will be all in vain and they could be denied entry to work. Stop calling Black Bahamians lazy just because they black and Bahamian. Teaching is not an easy job and some of these teachers go above and beyond and are well qualified for their positions. I dont like Ms Wilson style too much either but if there's a bad Apple talk about the bad apple

Yes ThisisOurs has a point. Primary school teachers especially have to stay with students all day with minimal breaks during the day. This is due to the fact that they have to teach just about every subject.

It's not an easy job for sure which is why they always have teacher shortages. Many teachers continue to leave government every year.

They were assigned to Marsh Harbour huh? SMH!