Come On Down, Canada 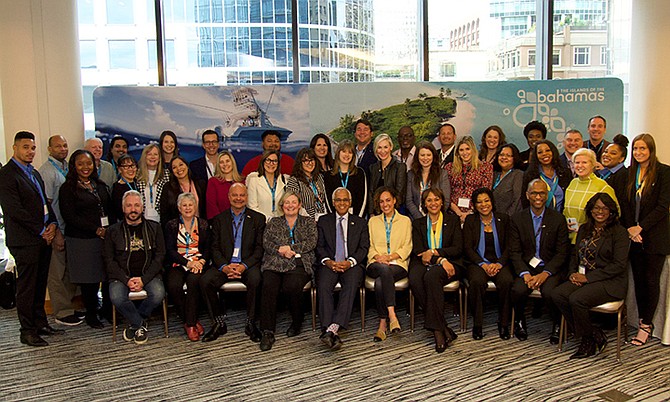 The Bahamas Ministry of Tourism and Aviation delegates lead by Minister of Tourism Dionisio D’Aguilar as well as numerous industry partners took media outlets and tour operators in Canada on a whirlwind tour of the Islands of the Bahamas, solidifying the messaging of the Bahamas being a viable destination for the Canadian tourists, despite the impact of Hurricane Dorian. “Following Hurricane Dorian, we felt that it was absolutely critical to come and let the Canadian market know that we are open for business and to introduce The Bahamas to new aspects of the Canadian market,” remarked Bahamas Ministry of Tourism Director General, Joy Jibrilu, “as far west as Vancouver, there is huge potential to market the country.”

Canada is the second largest country in the world and the second largest source market for visitor arrivals to The Bahamas next to the United States. Throughout the first seven months of 2019 an estimated 3.7 million Canadian arrivals to the Caribbean, Mexico and Central America representing a YOY increase of 4.3%. Canadian visitor arrivals to The Bahamas increased by 14% YOY in 2017-2018. During the months of January through September, Canadian arrivals paced 10.5% ahead of the same in 2018. “The tourism industry had an historic year in 2018 and has maintained momentum right up to Dorian’s arrival.

International arrivals to the Bahamas increased by just over 13% in August, including 2.1% growth from Canada. Air capacity from Canada was up 7% and fall bookings were looking strong,” remarked D’Aguilar, “it’s not business as usual in the Bahamas- that will be years away but this is a major step to be present in the Canadian market to regain momentum.” Ministry of Tourism officials are hopeful that the media blitz will strengthen sales efforts and add an intimate appeal to the Canadian tourist to visit the Bahamas. “We’ve had a record-breaking year with the Canadian market, and we are looking to continue that trend,” said Jibrilu.

So I checked with Statistics Canada website to see where Canadians are traveling the most in 2019, and The Bahamas did not make the top 10. The most surprising statistic was that Canadians #1 travel destination was their own country. The top warm tropical destination for Canadian winter-weary tourist was Mexico, followed by Cuba, and the Dominican Republic. Winter vacations are much cheaper than the Bahamas for these destinations, and that seems to be the attraction for Canadian visitors.

I still can't figure out why anybody travels to the Bahamas. The mystique is gone!