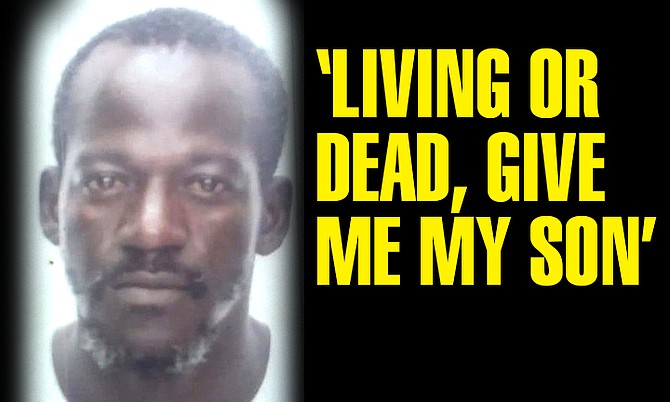 NEARLY a year after Marvin Pratt went missing, his mother Barbara Saunders is more restless than ever. “Some nights I still can’t sleep, so I just try to keep going,” the 61-year-old said yesterday.

In the bizarre case, Ms Saunders and her family, relying on testimony from an alleged eyewitness, claimed last year that Drug Enforcement Unit (DEU) officers arrested Mr Pratt on December 5, 2018 and that the Gambier Village resident hasn’t been seen since.

However, the application was dismissed, with then acting Supreme Court Justice Andrew Forbes saying his investigatory jurisdiction in the matter came to an end once police filed documents saying they have no record of Mr Pratt ever being taken into custody.

A lawyer for the family said yesterday that the group has hired private investigators to examine the matter.

As the anniversary of her son’s disappearance nears, Ms Saunders said the lack of closure is still consuming her mind.

“Even though I’m going about life, he’s right here in my head and I think about him every day,” she said.

“Every day, every second. If I move and do something, I think about him. I don’t know how I’m doing it. I have a picture of Marvin in my car. Every day when I sit down in the car, I put the picture down and look at it. I go to the shop, I got the picture in my hand with me. When I’m on the road driving to and from work I’m praying for him.

“If he living or he dead, just give me the bones because I have a life to live too. I can’t just let him be out there and not know what happened.”

Ms Saunders said a part of her believes her son is alive while another part believes he’s dead.

“Once I bury him, then I’ll change my life,” she said. “I want to run a race where when I find him, then I’ll die. If he living I will live, but if I find him, once I bury him, then I will lay down and die. I have other children but with me and him, when I used to be sick, he was always there for me. He would get up in the night and would say, ‘I could drive you to the hospital and I will be there for you.’ I have big girls and they never even check so I have to do this for him, even if I only found the bones.

“It’s so hard because I cannot stop,” she continued. “If he was involved with some kind of drug deal or something big, I wouldn’t bother checking because then I know what time it is. But if this is a police mix-up, then I got to find out because they the people who suppose to protect him.”

“I was cleaning a man’s bathroom and when I was going home that morning I saw the police coming and I saw Marvin, so I said ‘Marvin run, run, run, the man, the man,’ and they ran behind him, put him in a Jeep, and the officer told me if I open my (expletive) mouth he gon’ kill me,” she claimed.

Ms Saunders, however, said the family is still trying to get surveillance cameras they think could show what happened the day in question but neighbours have been uncooperative with her requests.

I pray God listens to his blood crying from the ground and what happened to him is revealed.

“I was cleaning a man’s bathroom and when I was going home that morning I saw the police coming and I saw Marvin, so I said ‘Marvin run, run, run, the man, the man,’ and they ran behind him, put him in a Jeep, and the officer told me if I open my (expletive) mouth he gon’ kill me,” she claimed.

but the police claim they never picked him up. Marvin Dames and those 5 pastors in Parliament standing before their congregations every week speaking God can't let this stand

Was not expecting to cry reading this.