High Percentage Of Bahamians ‘Tolerant’ Of Abuse Of Women 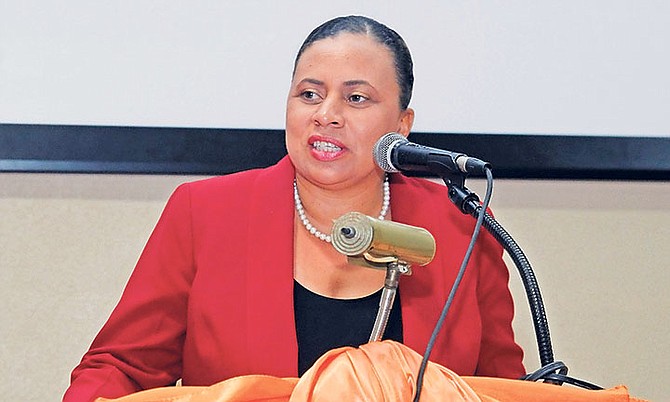 Keshan Bastian of the Ministry of Education reveals findings of a new survey focused on gender-based violence. Photo/Azaleta Ishmael-Newry

The Bahamas ranks third highest for being tolerant of the abuse of women, according to a recent survey conducted throughout the Caribbean.

Startling statistics on how Bahamians view gender-based violence were revealed by Keshan Bastian of the Ministry of Education, who spoke during a youth symposium last Friday in the lead-up to the United Nations sanctioned “16 Days of Activism to End Violence Against Women and Girls.”

Ms Bastian revealed that a mere 7.7 percent of Bahamians interviewed did not approve of a man abusing an unfaithful woman. Thirty percent interviewed said while they didn’t approve of abuse, they could understand if the man “touched her up” for her unfaithfulness.

Ms Bastian said she wanted to know what constituted being “touched up” and she discovered that slapping was not considered as grave as a punch or other forms of violence. An alarming 27 percent interviewed said they could understand if a man abused his wife because she did not attend to household duties.

“We have to be careful how we educate our daughters in an unspoken language,” she told the young people gathered at the symposium.

“What you tolerate as a parent is a lesson in itself. We must teach our daughters that they are beautifully and wonderfully made and meant to be respected. We have to let them know that we, too, went through the things they are going through as young people.”

Young people, she added, need to be educated on the various forms of violence, which can include forms of sexual violence such as someone invading your private space and dancing “on you” in a sexual manner at a party or club. There is also violence in technology, such as spreading rumours on social media or using people’s images disrespectfully and without consent.

Junior Achievers members of YEP (the Youth Empowerment Programme), and students of the UB School of Nursing engaged in the rap session to candidly discuss issues of violence and ways to address it.

Senator Jamaal Moss also participated. He warned young women to send the right message to their male counterparts. For example, he said someone like him who treats a woman with respect and may aim to meet her needs is sometimes treated poorly by the same woman who would accept rough and borderline violent behaviour from another man. He suggested that women set their standards high and maintain them in order to change the way young men and women treat each other.

The youth symposium was moderated by comedian Jaquan “Dasquay” Adderley, while entertainer Alexander “Stacs” Hepburn put on a performance. Stephanie Frith of Princess Court spoke on the topic “Break the Silence” and Khandi Gibson of FOAM (Families of All Murder Victims) spoke on “End the Violence”.

The young people were encouraged to push their Members of Parliament to ratify the International Labour Organisation’s Convention No. 190 for the elimination of violence in the workplace. Sharon Martin, president of the National Congress of Trade Union’s Women’s Association, said the Bahamas signed in principle in June of this year. The goal, she said, is to take the 16 days of activism from “awareness to accountability”.

Marisa Mason Smith of the Zonta Club of New Providence gave an overview of the 16 days. Zonta Bahamas clubs have been leading the way in the Bahamas for the past seven years. All over the world, the 16 days of activism have been recognised. Yesterday, the International Day to End Violence Against Women and Girls, marked the start of the 16 days, which end on December 10 with the United Nations’ Human Rights Day.

The violence itself is terrible, it is terrible that in the 21st century there is violence against a woman, wherever it is.