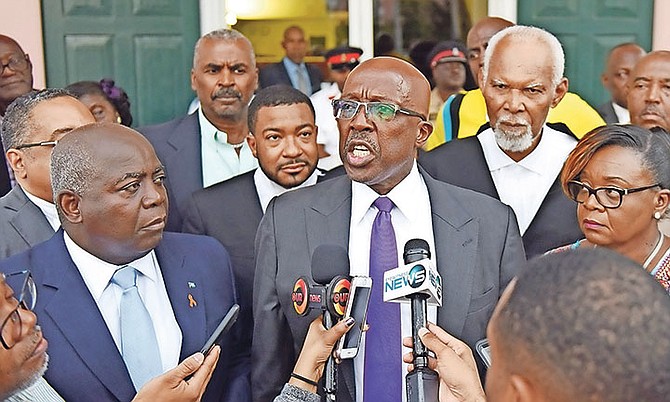 AFTER former Labour Minister Shane Gibson was acquitted on all counts of bribery of which he was accused, Progressive Liberal Party leader Philip “Brave” Davis called for an inquiry into the prosecution’s conduct regarding the case.

Calling yesterday’s not guilty verdicts a miracle, Mr Davis said he and his colleagues prayed for that outcome and are pleased the jury saw the case how they saw it.

“This case should have never been brought; it should not have gone to the jury,” he said in a statement yesterday. “It was clear from the start this was simply victor’s justice. The political party in power taking advantage of its position as guardians of the state to oppress the political minority.

“Prime Minister Hubert Minnis goes down in history of our country as the meanest and most vengeful prime minister. One who sought to divide instead of uniting. His Attorney General goes down in history as one whose office didn’t follow the law, but allows politics to drive the prosecution of a political opponent.

“We know that the evidence was contaminated in this case by reason of bringing witnesses together to discuss remove ambiguities and difference between them. Once revealed, the trial should have been stopped. The misconduct of the prosecutors should not go without inquiry with a view of ensuring that justice is done for and on behalf of Shane Gibson and the justice system itself.

“I’m deeply disappointed in the FNM. They all stood and allowed this injustice to be wreaked upon Shane Gibson and his family. At the end of the day the jury got it right.”

When asked about the PLP’s victories in court, Mr Davis said he warned the prime minister in 2017 in a letter that winning would be the outcome.

He told reporters yesterday: “I knew they were engaged in skullduggery. That they were not pursuing this as a matter of justice but as a matter of vengeance and a matter of what I call victor’s justice and the result is here. We hope lessons are learnt from this.”

Yesterday, Justice Carolita Bethel acquitted and discharged Mr Gibson of all of the 15 counts of bribery that he faced. Gibson had been accused of soliciting and accepting more than $200,000 in bribes from Jonathan Ash as a condition for expediting payments the contractor was owed by the Christie administration.

Time to get our police force back in training. This was an embarrassment. That officer who admitted to changing statements needs to be fired.

This was nothing but pure nonsense. Now we know why crime is so high in this country. Our police have no idea how to properly prepare a case for trial....

What do you expect from a police force that has become very Haitianized throughout its ranks and is comprised in the main of very lowly paid police officers who received a D- education in our failed and dysfunctional public education system? The Jamaican QC, Keith Knight, can't believe how easy it was for him to get Frank Smith and now Shameless Shane Gibson acquitted of all charges. QC Knight will surely be telling all of his colleagues back in Jamaica just how dumb and stupid just about everyone is within our judicial system here in the Bahamas and within the hierarchy of our government. Millions of taxpayer dollars once again flushed down the toilet by Minnis and Bethel. What a joke!

And this is the problem here. Nothing will happen. You had an officer admit to doing something wrong and nothing. This goes on all the time in all departments of this country. When people are found to do something wrong they are not fired or charged before the court, rather they are just moved around or everyone pretends nothing happens. Until we get serious when people break the laws we will never be able to make this country better

Agree 100% with Davis. Getting witnesses together to synchronize stories??? I wonder what penalty that would have gotten in the US.

And let's not forget the witness tampering by Dr. Sands and Marvin Dames as cabinet ministers that resulted in Frank Smith walking away as a free man from his criminal charges. Just more millions of taxpayer dollars flushed down the toilet by Minnis and Bethel. What a flaming joke!

Yeah, no. Tis every common man's and woman's nightmare be forced to defend before the colony's courts when financially handicapped to import the learned services a most skilled Queen's Counsel QC to be prepared spend hundreds thousands dollars in order to mount a defense to rebuke the prosecution's unlimited funds evidence. Some us still don't believe that the popilaces at large, have yet learn all there is to learn about the prosecution's case surrounding the not tendered, nor even requesting prior cabinet approval relating to the awarding the maintenance contact over at Prince Margaret Hospital . Like how many learned QC's were there from both the prosecution's and defendant's sides?

I need a chiropractor I've been shaking my head so much lately. So embarrassed for our country. Everyone in the country knows about the corruption and the bag men and the shingles but yet nobody can be found guilty. Crying shame!

@sickened, we are an embarrasment indeed! This is how corruption is perpetuated. I am saddened because as a nation we continue to accept corruption as a part of every day life. Nothing will change because many believe that you can be dishonest, hire the best attorney and he/she can get you out of your wrong doing. When will we do better?....after we have lost this great nation?

Now that the corrupt elite within the PLP know they are invincible, you just imagine what they will do if they ever get control of government again. They will have Hubert Minnis and his adult children all wishing they had never returned to the Bahamas to practice medicine. And Snake will be leading the charge as one who has repeated said, 'what goes around, comes around'. My oh my.

If only a verdict of not guilty meant the person did not commit the crime!

The crux of the problem in dispensing justice in our country today is that our jury pools are made up of way too many of the same kind of D- educated individuals who are all too willing to vote for a political candidate like Shameless Shane. Like Frank Smith before him, Shameless Shane was able to take great comfort in knowing he would be judged by a jury made up of a majority of 'his kind of D- educated voter'. And of course QC Knight knew exactly the type of juror to select among his picks for both the Frank Smith and Shameless Shane trials. The writing was on the wall as to the outcome of these trials from the very outset. But at the time the very arrogant, nasty, deceitful and vindictive Minnis needed something to help distract the people's attention away from the whopping 60% increase in VAT that he inflicted on them.

In the run up to the last general election I kept saying "THINK, THINK, THINK" before you vote for Minnis or any other FNM candidate, but too many of you were blinded by your hatred of Vomit Christie and the very corrupt PLP to see the true evil within Minnis.

... unfortunately its the dregs of society who offer themselves for higher political office, so until we have a cadre of persons who are nationalistic with common sense (higher education is not necessarily a requirement) and with moral values who create a NEW party, we will continue to see saw between two the evils (PLP & FNM) each election cycle!

Yeah, no. Guess only way truly learn what the jury really thought about evidence offered by prosecution, would be conduct poll each individual comrade member jury? I've just finished reading the colony's comrade attorney general Carl Wilshire' stooping over he self, whilst putting the government's political spin spin of, he guesses be left for the populaces at large will just have deal with the jury's verdict?

This whole saga has just been one long comedy show, better than the Shingles, I mean the Simpsons