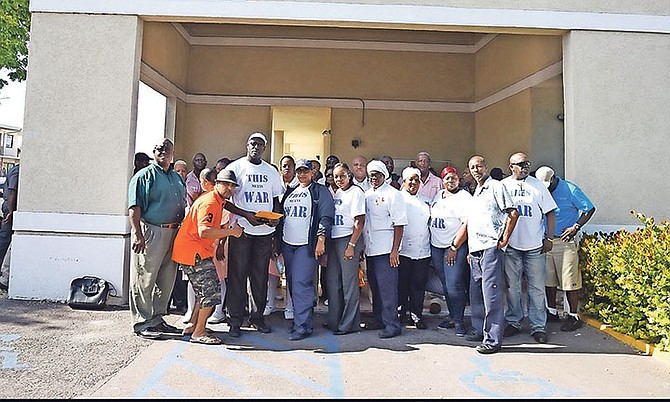 By YOURI KEMP and NEIL HARTNELL

Atlantis last night obtained an emergency injunction to prevent further industrial action by the hotel union following yesterday’s picketing that hit an industry trying to rise from its “knees” post-Dorian.

Tribune Business understands that the Supreme Court Order blocks the Bahamas Hotel, Catering and Allied Workers Union (BHCAWU) and its members from interfering with the Paradise Island-based resort’s operations, guests and employees over the critical Thanksgiving holiday weekend until both sides appear for a joint hearing on Friday, December 6.

Atlantis, the country’s largest private sector employer, acted after several hundred employees and union members - many of whom appeared to be its housekeeping staff - picketed the entrance to the complex’s Coral Towers property.

Darrin Woods, the union’s president, speaking before the injunction was granted denied that it was a strike as he pledged the action would continue “as long as workers want to come out”. He said: “We are not striking, we are picketing. The Industrial Relations Act, Schedule two, gives you the rules for picketing.”

This allows workers to take such action over a trade dispute where a strike vote has been declared by their registered trade union, and Mr Woods added: “We are picketing in the furtherance of a dispute where a strike vote has been issued, where they made changes to the terms and conditions, where they have outsourced the laundry at Atlantis and, in addition, the workers also want their contract.”

The union’s assorted grievances include the length of time it is taking to negotiate and seal a new industrial deal with the resorts represented by the Bahamas Hotel and Restaurant Employers Association (BHREA), plus the Four Seasons Ocean Club’s recent shift from a weekly to bi-weekly payroll.

However, many observers will likely argue that the union’s actions could not have been worse-timed for the Bahamian economy, the tourism industry and Atlantis given that the picketing took place on Thanksgiving Day - the traditional start to the peak winter tourism season when resorts and their employees make the bulk of their annual income.

Atlantis itself is likely to be seething over the timing given that it coincided with the traditional ‘Battle 4 Atlantis’ college basketball tournament that it hosts every Thanksgiving weekend. The tournament provides the resort with huge amounts of free airtime and publicity due to the presence of TV cameras, but yesterday the ‘Battle 4 Atlantis’ appeared to be taking place in the streets outside.

The picketing also comes as Atlantis’s owner, Brookfield Asset Management, is attempting to sell the Paradise Island property via a bidding process overseen by Citibank. Industrial actions are not going to be desired by potential buyers, and while Tribune Business understands no deal has been sealed yet, the Toronto-headquartered asset manager is likely to be furious with the hotel union.

Ed Fields, Atlantis’ senior vice-president of public affairs, expressed surprise over the union’s move given that significant progress was apparently being made with the hotel union in talks on a new industrial agreement.

The last valid deal between the two parties expired in January 2013 and, because the hotel union failed to submit its proposal for a new agreement by the stipulated October 2012 deadline, resort employers have continued as if the terms of the previous contract have stayed in effect. This has left workers agitating for a new deal and pay increases due to subsequent cost of living rises provoked by VAT and the like.

“Mr Russell Miller, chairman of the Bahamas Hotel Employers Association, was due to meet the union today at Hotels House to sign off on 36 of the 48 sections of the new agreement that were mutually agreed upon. The negotiations have not been contentious, and we do not know where this is coming from.”

Mr Fields added: “It is safe to say that over 95 percent of our associates reported to work, and operations are proceeding without interrupting services to our guests.”

Dionisio D’Aguilar, minister of tourism and aviation, yesterday warned that any industrial unrest “compounds a bad situation” with The Bahamas having been portrayed internationally as “down on our knees” following Hurricane Dorian as recently as two months ago.

“The negative public relations was that The Bahamas has been destroyed by Hurricane Dorian and we were down on our knees, and we have obviously been getting our message out that the islands of The Bahamas are open for business and 90 percent of tourism infrastructure was unaffected by the storm. So, therefore, please come and visit.”

Suggesting that the union’s actions threatened to undermine this message, he added: “As you can imagine the tourism sector, which is the linchpin of our economy, over 50 percent of our GDP, two out of three Bahamians are employed in that sector, is at a very, very sensitive stage right now.

“We are trying to combat all of this negative public relations that has been wrought on us, and obviously we are trying to rebuild our nation after Hurricane Dorian. As foreign visitors agree to take a second look at The Bahamas and say: ‘Let me come here and see what’s going on’, they find an island that has not been destroyed and devastated, but they are greeted with industrial action taking place in our hotels. It compounds a bad situation.”

Mr D’Aguilar, emphasising that he did not want to take sides, said the timing of the union’s actions would have been “more understandable” in a non-Dorian environment. With the Bahamian tourism industry and economy in a “very sensitive” situation, he urged all parties to do nothing that would further inflame the situation.

Mr Woods, meanwhile, said: “As long as the workers want to come out, we are coming. We have nine strike vote certificates and the last one was held in June 15. They are only now exercising their right to picket outside the property to bring attention and light to their plight.”

When asked why was there such a long period in between the final strike vote and the current picking action, Mr Woods added: “We were trying to talk; we just didn’t want to take the votes and then strike.

“None of the issues we voted for a strike on we were able to get resolution on except for one. We are working on the other ones currently. We are saying that time is taking too long, and it is time to bring our issues to a close.”