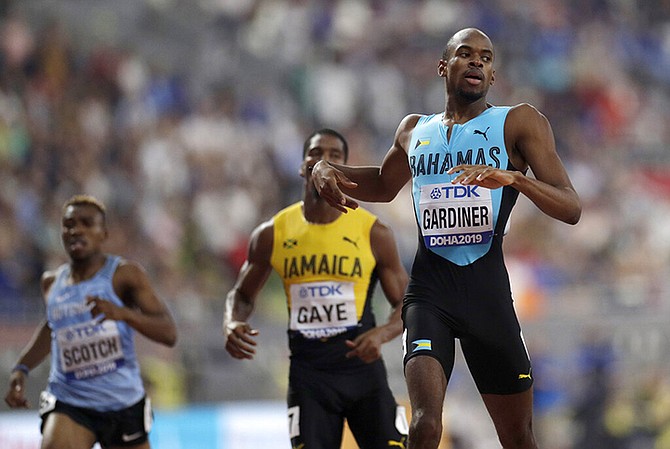 DOHA, Qatar — Steven Gardiner is on the threshold of not only becoming the only Bahamian to win two consecutive medals in the men’s 400 metres at the International Amateur Athletic Federation’s World Championships, but also the second male to win the gold medal in the one-lap race.

Avard Moncur, at the age of 23 years old, became the first Bahamian male 400m champion at the 8th Worlds in 2001 in Edmonton, Canada. Eighteen years later at the 17th Worlds, Gardiner, at 24, can match his individual feat and add to his own résumé with a title after Friday’s race at 3:30pm EST.

In his first real test at these championships, Gardiner came out in flying colours.

Matched against former world and Olympic champion Kirani James, Gardiner, the 2017 silver medallist from London, England, kept his composure and powered through in 44.13 seconds, the fastest time of the field of three heats of the semi-final on day six of the championships at the Khalifa International Stadium.

After pulling up on Gardiner on the inside in lane five to the top of the final turn, 27-year-old James went neck-and-neck to the line, only to fall off at the end in 44.23 for second place. The duo, producing season’s best performances, will occupy those two spots going into the final, the third for Team Bahamas this week, which for the first time in two decades won’t have any relay teams entered.

“I felt amazing, pretty good. We could have done a little more, but we didn’t want to do it tonight. We want to keep something for the final,” said Gardiner, the Bahamian national record holder at 43.74.

In facing James for the first time, Gardiner said he’s aware of his experience and they both knew that they had to contain themselves and not get over exerted. “Nobody panicked. We just cruised to the line,” he summed up.

James, who had some memorable match-ups with Chris ‘Fireman’ Brown, said while it’s good to be back, he’s looking forward to facing Gardiner in their encore.

“I feel good. Both of us are very competitive, so it should be quite interesting,” said James, who has a lifetime best of 43.74, but didn’t open his 2019 campaign until September 6 when he obtained the qualifying standard for the championships.

American Fred Kerley, the second fastest man this year, won the opening heat in 44.25 for the third fastest time.

But the surprise came in the third and final heat when American Michael Norman, the world leader, slipped all the way to seventh. His heat was won by Trinidad & Tobago’s veteran Michael Cedeno in 44.41, his season’s best. Cedeno, however, paid a price as he was taken off the track in a wheelchair.

Gardiner’s final will be the third appearance for Team Bahamas at this year’s championships.

Wednesday night under the spotlights of the flashing colourful lights to introduce the finalists at these championships, Tynia Gaither came through in the first final for Team Bahamas in the women’s 200m in eighth place in 22.90, the same position she got in her senior global individual final debut two years ago at the 16th Worlds in London, England.

Tonight, Shaunae Miller-Uibo, Gardiner’s close friend, will pursue her first Worlds individual gold medal. She attempted the 200/400m double in 2017, only to finish fourth in the one-lap race and came back for the bronze in the 200m. She goes in as the hands down favourite at 3:50pm EST.

Without any relay team participating, Gardiner will also represent the last hope for a medal for Team Bahamas.

With an improvement in his training regimen under coach Gary Evans, Gardiner is confident that he has the complete package to not just get back on the podium but to ascend to the top for the gold and the hefty cash prize of $60,000 for the champion.

“I just want to be on the podium, to be honest,” he admitted. “This is my third World Championships, so I just want to go out there and add another medal to my collection.”

With one of the top contenders Norman eliminated from the field, Gardiner said he’s not going to underestimate who’s left.

“I’m just going to go out there and focus on my lane,” he said. “Don’t worry about nobody else, just do me and be ready to go.”

With five competitors from the Caribbean expected to make up the final eight lanes, there’s talk about a Caribbean sweep. For Gardiner, he just hopes that he’s one of them and if he can put the perfect race together, emerge as the leader of the pack.

In their semis, all but Kerley did season’s bests, while Zambrano established a national record in 44.55 for Colombia. Kerley’s second world leading season’s best is also his lifetime best. Norman had the world’s best of 43.45, but he eliminated himself.

For what it’s worth, Gardiner has recorded the world’s third best time this year.