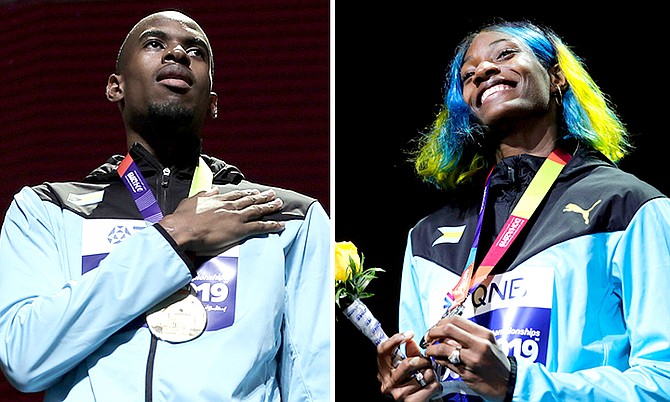 DOHA, Qatar — Steven Gardiner brought the curtain down on Team Bahamas’ performances at the 17th IAAF World Championships on Friday in grand style with his national record breaking performance in the men’s 400 metres.

His night was celebrated under the flashing lights inside the Khalifa International Stadium right after Shaunae Miller-Uibo collected her medal for the women’s 400m she won Thursday night. Gardiner didn’t receive his medal until Saturday night.

The Bahamas Association of Athletic Associations held a reception to honour the pair as well as the other members of the nine-member team on Saturday night as well for their 15th place overall.

Their performances drew memories from the first time that the Bahamas got on the podium in Gothenburg, Sweden in 1995, only back then it was Troy Kemp that claimed the gold in the men’s high jump and Pauline Davis-Thompson followed with the silver in the women’s 200m.

Gardiner, 24, became the Bahamas’ first male double individual medallist as he duplicated his feat that he first accomplished in London, England two years ago in 2016.

During those championships, Miller-Uibo attempted to become the first Bahamian to clinch a double victory, but she fell short at the line in the women’s 400m and ended up securing the bronze in the 200m.

However, Miller-Uibo, 25, can boast of being the first Bahamian female and athlete to clinch three individual medals. Her initial medal came in 2015 in Beijing, China where she earned the silver medal.

For the record, Debbie Ferguson-McKenzie has won the most decorated medals for women, taking two individuals and was a member of two relay teams.

Her pair of individual medals were gold in the women’s 200m in Edmonton, Canada in 2001 and bronze in the half-lap race again in Berlin, Germany in 2009.

In 1999, Ferguson-McKenzie ran with the women’s 4 x 100 metre relay team, comprising of Savatheda Fynes, Chandra Sturrup, Pauline Davis-Thompson and Eldece Clarke that got their nicknames ‘Golden Girls’ for their victory in Seville, Spain.

Ferguson-McKenzie, now an assistant coach at the University of Kentucky, was also a part of the last Bahamian women’s team to win a medal as the combo of Sheniqua ‘Q’ Ferguson, Sturrup and Christine Amertil picked up the silver in the 4 x 100m relay in 2009 in Berlin, Germany.

Avard Moncur, the first Bahamian male 400m champion in 2001 in Edmonton, Canada, holds the distinction of having won three as a part of the men’s 4 x 400m relay as they produced one of each colour. He joins Chris ‘Fireman’ Brown, who was a part of each of those teams. The only thing that was missing from Brown’s résumé was an individual medal in the one-lap race after making it to at least two finals.

Moncur and Brown got help from Troy McIntosh, Timonthy Munnings and Carl Oliver as they struck gold in 2001 in Edmonton, Canada. Moncur, Brown, Nathaniel McKinney, Andrae Williams and Michael Mathieu got a silver in 2007 in Osaka.

And in 2003, Moncur, Brown, Dennis Darling, McKinney and Oliver came up with the bronze in 2003 in Saint-Denis.

Although they’ve had teams that competed on relay teams after their glory days, the Bahamas has not been back on the podium since 2009 for the women and 2007 for the men.

The 18th IAAF World Championships will be held closer to home in the United States in Eugene, Oregon. It’s anticipated that the Bahamas will have its teams back in the starting lineup.

No doubt, the Bahamas Association of Athletic Associations, now headed by Drumeco Archer, promised that they will be back next year at the 2020 Olympic Games in Tokyo, Japan.

Only time will tell.