‘Coach Yo’ And Ole Miss Rebels ‘Ready To Get To Work’ 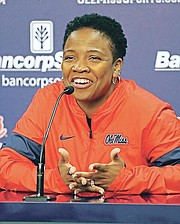 IN her second year at the helm as head coach of the Ole Miss Rebels women’s basketball programme, Yolett McPhee-McCuin looks to continue her impact on the programme and its progression in the SEC.

The Rebels opened practice for the 2019-20 season last week and welcomed the Grand Bahama native’s first recruiting class to the programme alongside returning veterans.

“I’m just really pumped. The whole midnight madness effect is not here like it used to be. It’s still an exciting time because this is a new season that we just got in with the 20 hours, and we are ready to get to work.” she said. “A lot of these young ladies just came here to help do something special.

In her first season, the Rebels finished 9-22, 3-13 in Southeastern conference play. They were eliminated in the opening round of the SEC tournament but the season was highlighted by the first ranked road win for the Rebels since 2011 when they defeated the Kentucky Wildcats for the first time since 2007.

In the offseason, she signed an extension which will run through the 2023 season.

In addition to increasing their win total by two from the previous year, she also increased the team’s profile off the court throughout Oxford, Mississippi with several community outreach efforts.

“A lot of people got experience. Usually when you have that, your team doesn’t get to build a chemistry that you need. But the good thing about it is they got a lot of playing time, so they understand what the SEC is about and so as they prepare now, they not only are preparing for the first couple of games, they are preparing for January.”

The Rebels are scheduled to host Clark Atlanta in an exhibition contest on November 1 and open the regular season at home against Mississippi Valley State on November 5.