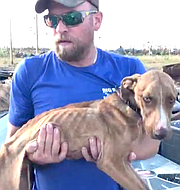 'Miracle' after being rescued in Abaco.

A DOG was miraculously found alive by animal rescuers after being trapped for weeks under mounds of hurricane debris in Abaco.

Spokesperson for Big Dog Ranch Rescue, Chase Scott told The Tribune that the group discovered the dog -- now named Miracle -- buried underneath a pile of air conditioners and building debris around midday on Friday.

Mr Scott said they believed Miracle was trapped under the debris for about three to four weeks, surviving off rainwater alone.

"To survive a month trapped beneath all the heavy materials is a miracle. The team named him Miracle because you could not see him underneath the air conditioners and building debris. There was another dog next to Miracle that had already passed away. That's one of the reasons he is a miracle," he said.

The story of Miracle is indeed a miraculous one and according to Mr Scott, the pup has already given so much hope to people throughout the country who are trying to cope with life after Dorian. The story has also attracted international attention.

"So many have sent social media messages and phone calls expressing that Miracle has given them hope for the rebuilding and future of the Bahamas and inspired them in difficult times," he noted.

"We have heard from countries all over the world and this little (dog) is serving as an inspiration to support Bahamas relief and the spirit of the Bahamas as he is a fighter who will regain strength to live a new and happy life."

Although Miracle has a long journey to recovery ahead of him, Mr Scott said that he has already made much progress since being rescued.

"Today, Miracle took his first steps and has put on four pounds since we rescued him Friday. Good signs but, like the Bahamas, he has a road of recovery ahead of him," he said.

In the wake of Hurricane Dorian, the Big Dog Ranch Rescue has already rescued 150 dogs so far, 50 of whom have already been reunited with their owners.

Mr Scott said the rescue group is committed to helping with the rescue efforts of displaced animals and will continue its missions in the storm affected islands each week.

Only a true Bahamian pot-cake could endure and survive such an horrendous life threantening ordeal - a true Miracle Dog indeed!

Most other dog breeds would have perished much earlier.

I can proudly say all the dogs I've ever had since childhood have been Bahamian pot-cakes and, as a Bahamian myself, I would never own any other breed of 'watch' dog. They are simply the best in so many ways.

If only the governments recovery efforts for humans had the same level of commitment as that of the Big Dog Ranch Rescue team.

Anyone who was alive but injured and pinned under debris had little chance of surviving for more than six or seven days. Precious rescue days were lost in the immediate aftermath of Dorian for reasons that we are now all too aware of.