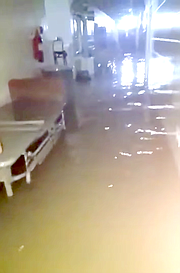 A still from a video showing flooding in the Rand Memorial Hospital after Hurricane Dorian.

HOSPITAL workers took to social media to call for a new public hospital in Grand Bahama following closure of the Rand Memorial Hospital after it was severely flooded during Hurricane Dorian in early September.

They are concerned that the facility - which had been exposed to black water intrusion (raw sewerage) as well as mould - is unsafe and needs to be "demolished," according to workers who voiced their concerns on a video that was posted to Facebook on Monday.

"I feel it needs to be demolished in my opinion," said one worker. "We need a new hospital, and we need one now."

"No matter how much cleaning they do…we absolutely need a new hospital," a nurse added.

The video showed areas that were flooded, the operating theatre, and other parts of the hospital that were in total disarray. Some workers were seen wearing facial masks as they spoke.

The hospital's administration and business offices have been relocated outside where Hospital Administrator Sharon Williams, her staff, and other office staff are working under tents.

The Tribune contacted Health Minister Dr Duane Sands yesterday for comment regarding the concerns of hospital workers in Grand Bahama about a new hospital.

While he agrees with them and shares their sentiments, Dr Sands indicated that one cannot be built overnight as it requires proper planning. He also noted that government is committed to building a new hospital on Grand Bahama.

"We all want a new hospital and we are prepared to seek a public-private partnership in order to accomplish a new hospital, but it cannot be built tomorrow," he said. "It would have to be planned, consultations done, and find an appropriate site chosen where a climate change resilient facility can be built."

Samaritan's Purse is presently operating a field hospital on site near RMH, providing health services to the public. The nonprofit group will be in Freeport for 90 days when the agreement expires.

"So, we find ourselves in tent offices - this is the administrative offices and the remaining tents would be home to all of the staff that report to the work site on a daily basis," she said pointing to the tents.

Another staff member believes that a new hospital is necessary because the current facility is located in a flood zone.

For his part, Dr Sands said there was black water intrusion in about 75 percent of RMH, including the operating room, Intensive Care Unit, and the wards, which were all contaminated.

He said that a thorough multiple agency assessment was done.

"And since that time, we have had unsafe levels of mould in certain areas in the hospital and we had to on the basis of safety concerns move out everyone from that portion of the hospital," he explained.

According to Dr Sands, the only areas that were deemed safe were the emergency room, psychiatric area, and the imaging department.

"We acknowledge the fact that this was an act of God and that there was nothing we could have done to prevent this, but the next step is how do we proceed," Dr Sands said.

The Elizabeth MP said officials have been given advice to semi-demolish those portions of the facility that were contaminated.

"We are not talking about knocking the whole building down, just removing walls and floorings, we have been instructed that from the lower level to over five feet of walls would be knocked down and removed, and then make a `determination as what if anything we are able to salvage," he said.

"If we are able to safely salvage that space then we have the opportunity to rebuild in those areas, being mindful of the fact it is still in a flood zone."

Dr Sands said that a new hospital cannot be built 30, 60, or 90 days, bearing in mind the existing agreement with Samaritan's Purse expires in 90 days from September.

"We will seek to extend, but obviously we cannot insist they extend their stay in the Bahamas. In order for Grand Bahama to function, there has to be adequate capacity for health services to be provided. We are very mindful of the fact the hurricane season has not yet ended," he said.

"And while the ultimate plan is, indeed, to seek a green site for complete restoration of health services in a new facility, that cannot happen tomorrow."

Dr Sands noted that government would also have to determine how to fund a new hospital.

Additionally, the minister said there are destroyed health facilities in High Rock, Pinder's Point and McLean's Town, and damage to emergency vehicles and medical records.

"This has been a catastrophic, devastating impact if we focus our attention on health," he said.

I understand the WHO has declared the building unsuitable and unrepairable to be used as a hospital. $19mil ain't gonna cut it. I also understand Samaritans Purse committed to a year on the ground. 90Days? Grand Bahama is screwed then. As always.

Government, Whampoa, the Haywards and St. Georges must pay for a new hospital this year. All of them have taken billions from us over the years, so no excuse, it's our damned money. BUILD A NEW HOSPITAL.

You cannot renovate a hospital after it has been flooded with sh-t.....