Call For Potter's Cay Dock Manager To Resign Was 'Disappointing' 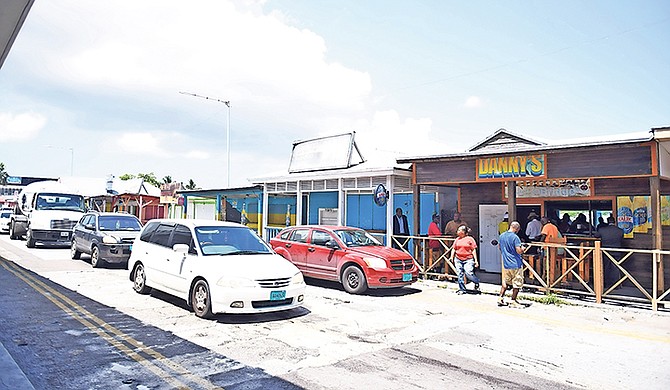 IT IS disappointing that Potter's Cay Dock vendors called for dock manager Gregory Minnis to resign during their protest last week, the Ministry of Agriculture said yesterday.

The government's parking policy, preventing patrons from parking in front of stalls, has upset vendors who complain of reduced business.

The ministry said in a statement yesterday: "The ministry acts in the role of landlord for the vendors operating on Potter's Cay. The representative of the ministry at that venue is the manager.

"Any concerns that vendors may have should be communicated to and dealt with by the manager and, whenever appropriate, advanced to the ministry's senior management.

"The manager at Potter's Cay is not empowered to act on his own outside of the oversight of the ministry, and as such, routinely updates his superiors on concerns relative to the vendors. Therefore, it was disappointing that the group of vendors protesting sought to personalise their concerns to the manager."

The ministry reiterated that parking is no longer allowed in front of stalls because doing so disrupts the steady flow of traffic on Potter's Cay and creates safety concerns.

"The call to relax those restrictions rests with the RBPF and the harbour master and both have expressed their concern about such," the ministry said. Officials also said they hope proper lighting in the east and west parking lots will be fully erected soon so patrons can park in safe, well illuminated spaces.

The ministry said it has issued letters to businesses on East Bay Street whose workers have been using parking spaces reserved for Potter's Cay patrons, telling them to discontinue doing this. Work is also continuing to electrify dock stalls, though the work has been slow, the ministry said.

"The ministry wishes to assure the public that the historic site of Potter's Cay remains a priority, however we are fully aware of the complex issues in bringing Potter's Cay to its full potential," the ministry said.

"We have begun discussions with a number of stakeholders, including the vendors, toward that goal in the short and long term and will update all stakeholders as things progress.

We are deeply committed to the success of the vendors and the creation of quality cultural space for Bahamians and visitors alike and we look forward to a productive working relationship with all parties involved."

In June, the ministry released a similar statement saying it was working on measures to renew confidence in the dock.

Last week, vendors guessed that nearly 60 people have been laid off since the new rules were implemented and 15 stalls have closed down.

Vendors spoke about struggling to pay bills as their profits dramatically decreased.

Porters cay vendors and their association need to come up with a strategy, a plan to make that area a place to be, if just because you can't park in front of a stall which is only a minimum amount of guest from these cars, and they say before the restriction 1000 or more guest frequent the cay on certain nights. People it ain't the convenience of cars being able to park in front of the stalls the problem, it's the vendors and association fault, they are too lazy and lack imagination, get together and make something happen.

And what exactly has been managed?????

Potter's cay is the epitome of chaos. How can anyone say they manage that chaotic mess?????

We really need to stop using words that don't apply. Potter's Cay dock has never in history been managed. lol....

The stories of being robbed (even harmed) while walking back to your trans in the "parking area" is exactly why patrons won't go there anymore.

"Officials also said they hope proper lighting in the east and west parking lots will be fully erected soon so patrons can park in safe, well illuminated spaces."

This might have something to do with it.. I mean you make a parking lot but don't put proper lighting in place the same time? Yet..Potters Cay have a manager LMAO