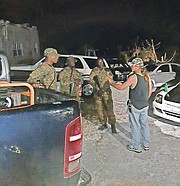 Bahamian personnel in action on Abaco.

AMID concerns about crime and a lack of security on Abaco after Hurricane Dorian, the Royal Royal Bahamas Police and Defence Forces are carrying out a joint operation on the island.

In a press release sent on Saturday, it was noted that Commissioner of Police Anthony Ferguson, and the RBDF commander, Commodore Tellis Bethel, were on scene recently with their executive team members to assess the progress of the operation which focused on Central and North Abaco over the past several days.

Activities undertaken by both forces included joint mobile patrols, check points at strategic locations, maintaining security at static points and getting feed back from local residents.

As the island recovers from hurricane damage, the law enforcement agencies want to assure continued safety and security of residents, the statement said.

Last week, the chairman of the Free National Movement's Central and South Abaco constituency branch said he wants National Security Minister Marvin Dames to resign over the "weak security" on the island.

"The minister of national security needs to answer for this failure," Victor Patterson complained last week. "I have no more patience for him."

Mr Dames in response told The Tribune he does not have operational control of law enforcement agencies and will not interfere politically with them, especially after satisfying himself that the police commissioner and defence force commodore are ably securing the island. He also said officials intend to increase the number of police vehicles on Abaco.

However earlier this month, Prime Minister Dr Hubert Minnis said he was not happy with the security situation in Abaco, saying that Cabinet would consider implementing a curfew there.

Concerns among comrade observant populaces can't but help notice how the colony's Royal Constabulary are on their way using their policing operations in Abaco's as their road map becoming a heavily armed Military Force, yes, no ....

A little to late. Everything of value was already looted and hidden away.

Took 'em long enough. Looks like we move at a snail's pace even in an unprecedented national emergency...……...

Except didn't take them but few weeks into their 2017 governing mandate to investigate, arrest shuffle former PLP politicians be paraded before the awaiting media's photographers as they made their way in leg shackles to the court of justice, yes, no ... look clues no snail pace to injustice here ....almost likes they had court's case briefs, prepared before 2017 ...