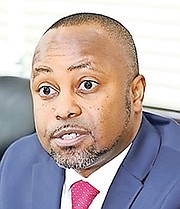 SEVERAL shelters in Grand Bahama have been compromised and are taking on water as rescue teams on the island mobilise to relocate residents to safer locations, according to Minister of State for Grand Bahama Kwasi Thompson on Monday.

Giving a live update on ZNS News, Mr Turnquest described the situation on Grand Bahama as “serious” and “catastrophic.”

Dozens of harrowing videos were circulated on social media on Monday of Grand Bahama residents trapped in their houses, some forced to take shelter in the ceiling or on top of cabinets, as powerful storm surge gushed through their homes.

Minister of Agriculture Michael Pintard was one of those trapped in his home. He posted a video showing water at “minimum of 20 feet” beating against his kitchen window. Inside his home was also severely flooded.

“This is what I’m facing at the moment and I have neighbours that are in a far worse position than me and my family,” he said in the video.

It is unclear if Mr Pintard has been rescued.

There were countless calls for rescue from vulnerable parts of the island. Officials urged people to be calm and seek higher ground, adding rescue teams would go out and find those who need help as soon as weather permitted.

Mr Thompson said 50 residents of the Grand Bahama Children’s Home have been relocated. He also said people at a special needs hurricane shelter will be moved to the Rand Memorial Hospital.

He also said: “This has never occurred before, where we have had flooding throughout the downtown area all the way across Pioneer’s Way, all the way down the Mall Drive. Anyone who knows Freeport, that’s pretty much half the entire island covered in water.”

In terms of people who need to be moved from shelters to different locations, Mr Thompson said: “In the area of Hilton Outten (Convention Centre), they have begun to take on water and so we are dialoguing, telling them to stay calm, we’re going to get to them as soon as we can.

He said officials are moving some people who have been in compromised buildings to the Grand Lucayan resort.

For those needing rescue, he said many of them would have to wait until the water recedes; a number of areas are cut off because the roads are impassable.

He urged people who cannot get through to the EOC phone lines to call ZNS in Grand Bahama at 352-9713/4 where information will be relayed to police.

The 'politically appointed, not elected' Comrade Kwasi,has you checked see if the Grand Lucayan Hotel left un $35 million repaired from previous hurricane - has taken on any fresh hurricane waters? ....

Mr. Thompson said, “This has never occurred before, where we have had flooding throughout the downtown area all the way across Pioneer’s Way, all the way down the Mall Drive. Anyone who knows Freeport, that’s pretty much half the entire island covered in water.” No, it has never occurred before. But, if you have been doing any reading at all, this will continue to get worse, year after year for the rest of our lives. Will we continue to act surprised that this is getting worse? Or, will we for once, educate ourselves and act accordingly. Or, at least act semi-responsibly? Leaders!!!!!!! Where are you?