Face To Face: Marilyn’S Moving And Shaking With Houston’S Elite - But Never Forgets Her Roots 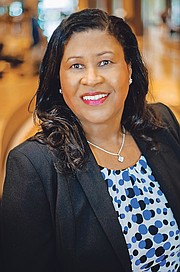 Bahamians all around the globe stared at their mobile phones in despair this weekend and into today as they saw videos and photographs of the destruction Hurricane Dorian wreaked on this country as it dragged across the northern islands.

I have had family and friends checking in from Australia, London, Jamaica and several states in the US. Among them, my cousin Marilyn Rose who is one of the bedrocks of our Watson family. She kept in touch from Houston through our family Whatsapp group chat. We all prayed for the safety of our cousins Colene and Harry in Freeport, as well as all Bahamians, especially those in Grand Bahama and Abaco, who faced the brunt of the storm.

There was nothing those abroad could do but offer prayers and encouragement, which meant the world to those of us here.

Marilyn has always been a source of encouragement for her younger family members, and so we were all elated when she was honoured among the “Top 30 Influential Women of Houston” just over a week ago. It was a well-deserved honour as Marilyn and her husband, Lynden Rose, have made such a positive impact on the Houston community, despite hailing from a small country like The Bahamas.

Prime Minister Dr Hubert Minnis took note of this when he visited Texas in January and saw how well known and respected the Roses are in influential circles in the state and especially in Houston. Lynden, an attorney by profession, serves as the Bahamas’ General Consul for Texas, operating out of his personal office and reports to the Miami office. While Lynden has made waves in the city in his own right, it is his wife who the movers and shakers came together to honour recently, along with 29 other top professional women in the community. 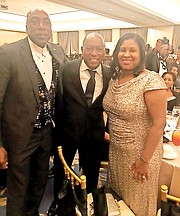 Marilyn Rose with Houston Mayor Sylvester Turner and her husband.

Marilyn A Rose is a Certified Public Accountant and serves as the Accounting Administrator in the Finance Office of the Executive Bureau at the Harris County Sheriff’s Office. She has worked in various capacities in her six-year tenure there. Before joining the Sheriff’s Office, Marilyn spent nine years at the Harris County Tax Assessor Collector and Voter’s Registrar Office as the Internal Auditor. Prior to embarking on a full-time position with Harris County, she worked on several contract engagements with Independent Accountants and established the LM Rose Consulting Group.

She considers her childhood as one that is a typical story of those who grew up in Nassau in her day – “we didn’t have much but we were happy”. Marilyn’s parents, William (deceased) and Yvonne Watson moved to Pyfrom’s Addition when she was six months old. At the time, they already had Dellareese and Anthony “Bubba”. In total, the Watson household had seven children, her younger siblings are Ricardo, Sharon, Kirkwood and Carlton.

“It was a lot of fun growing up,” she beamed.

“There was seven of us, so there was a lot going on all the time. We would go on the beach, and during the Christmas time, we would walk to Bay Street to watch the Junkanoo parade. The Watson household was always fun and filled with laughter.

“I remember daddy had a record… an instrumental, and we would march around the house and salute! We would also have dance contests. We didn’t have a lot, but we were happy kids. As we grew, daddy’s main thing was that we would always check for each other. To this day, we still do that. We don’t have any major conflicts among us. We may have differences of opinion, but we never got to the point where none of us are speaking. Mom also set a good example. She didn’t have conflicts with her siblings or her in-laws. Aunt Agatha (my mother and the only girl out of her parents’ seven children) is always dropping off her baked goods, and Uncle Frank (former Deputy Prime Minister) would send my mother flowers on her birthday every year. My dad also worked hard and sent six of us to college, which is amazing.”

Marilyn attended RM Bailey Senior High School, she attended Prairie View A&M University in 1981, graduating in in 1984 with a Bachelor of Business Administration degree in Accounting. She went on to complete her graduate studies at Texas Southern University where she obtained a Master of Business Administration Degree from the Jesse H. Jones School of Business in 1988. She then returned home to The Bahamas to work at Price Waterhouse International Accountant Firm (Price WaterhouseCoopers) from 1988 to 1993. 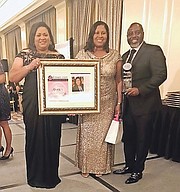 Marilyn receives gifts as she is honoured amongst Houston’s Top 30 Influential Women.

Although she was paying her dues back home, Marilyn must have known that Houston would be back in her sights in the future, as she was engaged to Lynden Rose. She met Lynden while she was a freshman at Prairie View, she and other Bahamians attended a party that Bahamians at TSU were hosting. At the time, the Houston Rockets were playing the Los Angeles Lakers on their home court. Lynden, a senior at the University Houston, hooked up with his friend, basketball star Michael Thompson. The pair attended the party together and there, a rosey-eyed Lynden spotted his future wife. He gave her his telephone number and told her to call collect, but she never did. However, he was able to get the beautiful 18 year-old’s number and call her, and the rest is history.

At first, Marilyn’s elbows became irritated, and she had a rash that wouldn’t go away. She went to the doctor in Nassau, but was misdiagnosed. Lupus tends to mimic other diseases and can be hard to diagnose.

When her brother Ricardo (Ricky) got married in Houston in 1990, she attended and decided to get a second opinion. Before the doctor even came back with the test results, the nurse noticed the butterfly-shaped rash on Marilyn’s face, and told her she may have Lupus. The nurse was right, but the doctor delivered the diagnosis without advising her what to do next.

Lynden’s brother, the late Dr. Matthew Rose, former PLP Member of Parliament for St Barnabas, arranged for her to see doctors in Florida. For the first three months, doctors there were treating her for Rheumatoid Arthritis. Meantime, her health was deteriorating. She was in a lot of pain, she was losing a lot of weight, and her long hair was falling out. It wasn’t until she returned to Houston and saw another doctor that she began receiving treatment for Lupus.

Here in Nassau, Dr Nwosa partnered with the doctor in Houston to help Marilyn.

Meantime Price Waterhouse supported her every step of the way.

By the time she got married in August of 1993, she was in remission with a bright outlook on life, after doctors told her she would still be able to have children. She ended up giving birth to two boys and together, she and Lynden have three children - Madelyn, Lynden and Lynnard. Marilyn became licensed under the Texas State Board of Public Accountancy. She is a Texas Southern University Board of Regent, serving her second term. She was appointed in 2011 by the former Governor Rick Perry and reappointed by Governor Greg Abbott in 2015. She is a former board member of the Lupus Foundation of America Texas Gulf Coast Chapter and Texas Organization of Youth Sports (TOYS).

Marilyn’s love and a passion for people was recognised when she was named Top 30 Most influential Women in Houston.

Marilyn’s work in the community has come with some recognition. On June 5, 1999 at the Status of Women Luncheon, she received the Status of Women Achievement Award from the Sigma Gamma Rho Sorority, Inc Epsilon Tau Sigma Chapter. The award was in admiration of her “spirit, love and unselfish dedication to the pursuit and betterment of those she touched with her simple act of kindness”. She was presented with the Marilyn Rose Presidents Leadership Scholarship Donor Award in 2013 by the then president, John L Rudley, in appreciation of her commitment to student success at Texas Southern University. She received the Excellence in Achievement Award from the Texas Southern University National Alumni Association in 2015, for her outstanding support to the university, students and alumni.

My son, Elijah currently attends TSU and he and his friends can personally attest that Marilyn goes above and beyond. She has prepared home-cooked meals for them, and she pushes them to do and achieve their very best, while seeking scholarships for those who meet the mark.

Lynden Junior and Lynnard are also heavily encouraged by their mother to put their best foot forward in life. Lynden just returned to Houston from Australia playing professional basketball and will be heading to Finland to play in the near future. He played for the University of Houston when he attended there. Lynnard is currently playing football at Colombia University in New York, where he is studying political science.

So good to see Bahamians continuing to make an impact all over the globe!