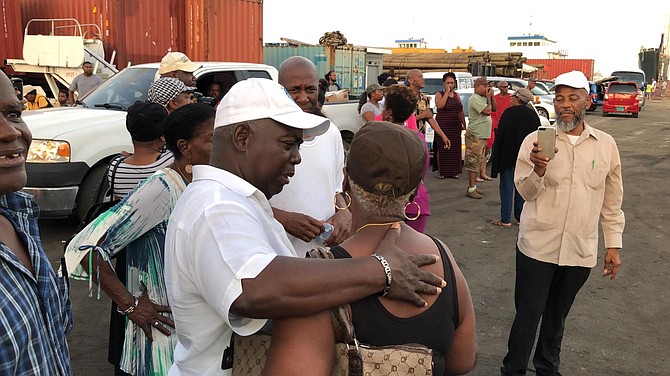 Departing the Mailboat on Saturday morning

PARTS of Grand Bahama look like war-torn Baghdad in the wake of Hurricane Dorian, according to one resident who evacuated the island and arrived in the capital on Saturday.

Lorenzo McKenzie told reporters that the level of death and devastation has left many people shaken and confused.

He was one of more than six hundred residents of Grand Bahama and Abaco who arrived in New Providence on Saturday morning by mail boat after evacuating those islands left devastated by Hurricane Dorian.

Progressive Liberal Party Leader Philip “Brave” Davis and a delegation from his party greeted them before the opposition contingent left for their own assessment of Grand Bahama and to deliver relief.

“Everything get thrown out.”

He said Grand Bahama residents are afraid that relief efforts will not reach those who need it most.

“People don’t have insurance - my sister sleep in an attic for four days over the bridge. A neighbour across the street, his wife died, people drowned, people dead. People dead in Freeport - this ain’t no joke.”

He also said: “The water has subsided but people are just trying to recover. It looks like Baghdad, it looks like Desert Storm hit Freeport. Everyone taking their stuff out, throwing it outside, people try to salvage what they had, in Hawksbill it’s totally devastated.”

As of Friday night, the official death toll from Dorian was 43, but officials expect that number to rise considerably are more bodies are found and processed.

"The loss of life we are experiencing is catastrophic and devastating," Prime Minister Dr Hubert Minnis said Friday.

US President Donald Trump said the death toll is going to be worse than anyone imagined.

“I want to give my warmest, best wishes to the people of the Bahamas, I know what you are going through - I spoke to your prime minister yesterday and he is absolutely devastated,” President Trump said in a video posted to the White House’s Facebook page late Friday.

“It looks like the numbers are going to be far worse than anyone ever thought. At the request of your government, the United States has come in, we have the Coast Guard, we have tremendous numbers of people working there, we’re bringing food, we’re bringing water.”

In a tweet on Saturday morning, the US president thanked Dr Minnis for his "very gracious and kind words" that "without the help of the United States and me, their would have been many more casualties" (sic).

Meanwhile, other hurricane relief efforts and donations continue to pour in.

On Thursday, the Disney Dream cruise ship dropped off food and water at Castaway Cay for distribution in Sandy Point, Abaco. The Disney Fantasy did the same on Friday with more deliveries to come.

“This is just the beginning, as Disney has pledged more than $1 million to help our friends, neighbours and coworkers in the Bahamas,” a statement from Disney said.

Local insurance company JS Johnson made a $100,000 donation to the National Emergency Management Agency on Friday.

Charles Johnson, JSJ senior manager said: “The destruction of this Category Five hurricane and the images that continue to circulate of unprecedented devastation on the islands and cays are heartbreaking. Our thoughts and prayers are with the people of the entire country, but particularly those directly affected by the storm.”