Insight: A Mountain To Climb – Which We Must Do Together 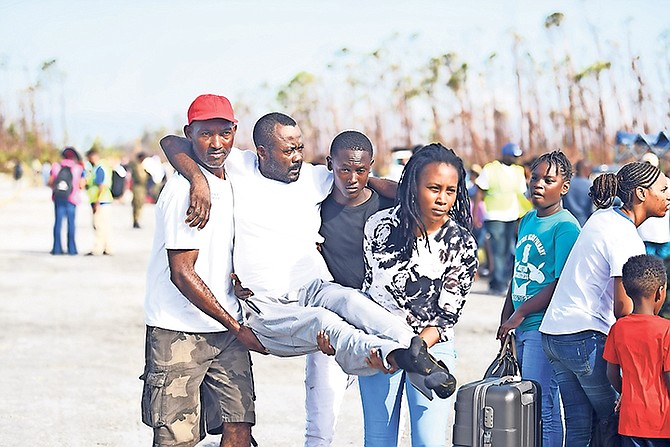 THE devastation left in the wake of Hurricane Dorian’s wrath has been absolutely unimaginable. As we braced ourselves for this monstrous Category 5 hurricane, there is no way we could have fathomed the trail of destruction that would be left behind. Footage depicting people’s lives scattered across Abaco and Grand Bahama in unrecognisable mangled pieces of debris have been plastered all over local and North American media outlets.

Accounts of the sheer horror experienced by those who stayed and experienced the utter devastation have traumatised not only an entire nation, but also many onlookers from around the world.

Without question, this is the most heartbreaking experience we’ve ever had to endure as a people.

Bahamians, for the most part, are easygoing, fun-loving and laid back – befitting of the widely held view of what living on an island paradise should be like.

Now, after an immeasurable amount of damage and a still yet to be confirmed number of deaths, the world is able to see a different side of who we are.

They’re seeing our pain and suffering. They’re witnessing the grief of loss - loss of love and everything people have worked their entire lives for. One particular image comes to mind that perfectly captures the story of so many of these survivors – that of an elderly woman standing on the foundation of what was once the home she toiled for eight to ten hours a day, five days a week, labouring in the intense heat of the sun. In that one image, as she looks up at the heavens, her suffering is palpable. You can feel it as your chest tightens and you fight back tears.

To feel such extreme heartache for people we don’t even know personally is more indicative of our deep love for each other as Bahamian people. Historically, there has never been a time when we’ve needed each other’s hearts more.

Considering how shattering this has been for Abaconians, Grand Bahamians and the entire populace, many of us may need to consider grief counselling. For those of us more closely affected, it should be mandatory.

By analysing the effects of the United States’ costliest storm and pondering our path to healing, much consideration has to be given to how we address the mental state of our country. In 2005, when Hurricane Katrina, a Category 3 storm, made landfall on New Orleans, their population size was 480,000. Based on CNN reports, 1,833 people died as a result of Hurricane Katrina with 1,577 of that total number being victims located in Louisiana. Although one loss of life is too much, that number of fatalities was still less than one percent of their entire population. Nonetheless, the effects of Katrina reverberated throughout New Orleans as a population struggled to cope with loss and rebuilding their lives.

Statistics outlined in a 2006 New York Times article covering the mental health challenges of Katrina survivors described a harrowing tale. In New Orleans, prior to the storm, Deputy Coroner Dr Jeffrey Rouse (at the time) indicated the city’s suicide rate was less than nine a year per 100,000 residents. After, as you may have already imagined, that number sky-rocketed in just four months. By the end of 2005, the suicide rate had nearly tripled to a rate of 26 per 100,000 residents.

Though the government has confirmed that 43 people have died at the hands of Hurricane Dorian, many survivors who’ve given first-hand accounts believe that number is a drop in the ocean.

With one list on the internet including more than 5,000 names, many of us are still hoping for a miracle, while others grow more hopeless as the days pass without any communication from missing loved ones.

The entire country is in total agreement. To that end, as the focus is currently on evacuating our brothers and sisters, you can be certain the events leading up and in the aftermath of this storm will be litigated in the court of public opinion.

However, right now, the time calls for sensitivity and solidarity among the Bahamian people.

Fighting among one another and allowing issues of prejudice to take centre stage will be counter-productive.

From the looks of it, we were not prepared for this storm – not by a long shot. And as a result, thousands of Bahamians are not the same people they were the morning before the storm.

For many of them - as we commonly do – they figured they would be able to brave the storm out and certainly could not imagine they would now be replaying the losses of their loved ones and members of their community.

Saying this is a tragedy is an absolute understatement. Furthermore, it really makes you consider what a crisis really is.

Without a doubt, many of us wish our brothers and sisters on the islands of Abaco and Grand Bahama were only without power today, instead of being without life.

Our mental health is now a serious matter of priority and we certainly hope the ministries of health and social services are going to be up to the mammoth task of helping thousands of the distressed.

As for those of us who were not affected directly by the storm, let’s form a tent around our brothers and sisters. They are going to need every supporting word and act of love they can get.

This is going to be a steep, uphill climb back to normalcy – or whatever that is.