Insight: This Is Not A Time For Partisan Politics. It Is A Time For Bigger Thinking. 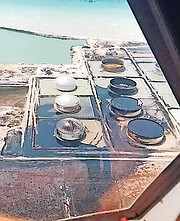 An aerial view of damage to Statoil in Grand Bahama.

It’s pretty tough up here. I am lucky to be alive and thankful. There was no storm surge on the south of Freeport. There was minor damage to my home; water penetration, roof damage and huge landscape destruction.

Our Freeport Garden City has been ravaged so often by hurricanes and recession that it’s very discouraging for us. Yet, what has been refreshing is how our community has come together so positively in helping each other.

Thousands of people have been displaced and lost their homes. The 20 foot surge from the north reached all the way through downtown. Only the southern elevation didn’t flood. Bodies are still being found.

I’m anxious about out East GB. There’s very little information. There is a community group which is recconoitering today.

Human Rights Bahamas and Save The Bays are working closely with NEMA and many other organisations both in Nassau and Freeport helping to organise relief supplies and distribution.

HRB is assisting with many of the Bahamians of Haitian descent and or Haitians, identifying missing and or deceased family in Abaco and in person as they arrive by boats and planes.

It is a tragedy what happened in Abaco. Historically, much hatefulness has been directed at the thousands of people in the Mud and Pigeon Peas shanty towns. Because successive Governments don’t want them to exist, there has been no provision for sanitation, utilities, shelter or other resources over the years in case of a disaster like this.

I understand the MP for Abaco Minister Darren Henfield did his best, with the police, to try and get thousands to evacuate. They were able to get many to go to the government administration building for shelter.

However, the residents were fearful of being evicted. They have laboured under the constant threat of having their homes demolished. Although most of them are born in The Bahamas, many of them are undocumented and fearful of Immigration.

Sadly, many preferred to take their chances with the Dorian. As can be seen from the dead bodies being pulled out of the rubble those poor people are paying the price for historic and intentional systemic political neglect and scapegoating.

At this time, thankfully, another beacon of light shined through from Immigration Minister Elsworth Johnson and Director Clarence Russell who issued a statement that Immigration would not engage in any interdiction exercises in the affected areas, relief would not be withheld on the grounds of nationality or place of origin, and they would deploy their resources to humanitarian assistance.

The three economic pillars of The Bahamas are the Abacos, Freeport and New Providence. Abaco has been devastated. Grand Bahama and Freeport are crippled, but will be able to rebound. The only way to recover economically is to rebuild. That will depend on foreign and domestic financial aid, use of all available human resources within The Bahamas and also insurance companies being fair and generous.

This should be a wake up call to politicians and technocrats to stop being mired in minutiae and control and to focus on long-term strategic planning and quality of life issues.

To rebuild in both islands, we should take advantage of all our human resources, both legal and illegal. The Bahamas doesn’t really have that many illegal immigrants. It’s really an issue of many thousands of people of Haitian origin being “undocumented”.

Bear in mind that probably most Bahamians don’t even have a passport. Being “documented” is not a legal requirement and, until Minister of Immigration Fred Mitchell’s new policy in 2014, it was not an issue. Since then it has been treated as such. At great and unnecessary cost to the Bahamian taxpayer, Immigration has been arresting people who are simply “undocumented” not “illegal”, and detaining them instead of focusing on protecting the borders and preventing more illegal immigration.

I urge the Government to consider an immigration amnesty and to give people who are here illegally temporary status and to stop the illegal round ups, so that the labour and the collective human resources of thousands of people born in the Bahamas - who consider themselves Bahamian and who are entitled to citizenship - can be put to positive use in reconstructing Abaco and Grand Bahama.

We will need every hand on deck!

In addition we are going to require a vast amount of foreign human resources to help rebuild. Immigration is going to have to allow many thousands of foreigners in to help.

The government must cut through all the red tape that has been strangling our economy so that both domestic and foreign investment can inject economic life blood into both islands.

We have suffered catastrophic destruction to lives and property. Reconstruction can be an economic boom. Our politicians should embrace it and take advantage of the opportunity. This is not a time for partisan politics. It is a time for bigger thinking.

After hurricanes Jean and Frances and others, many people did not recover what they should have from insurers because there was no provision for mandatory interim payments to tide people over so that they could properly assess their damage and make proper claims.

Many insurers took advantage of many people in Grand Bahama. There is no Legal Aid; there are no jury trials in civil cases and no punitive damages awards. Insurers retain the best law firms to defend until the claimant is worn down. Litigation is not a viable option.

Many were forced by dire circumstances to accept pennies on the dollar for their homes and possessions. Future laws to protect the claimants should be a priority.

It’s a time for us to all work together in this short term, to focus on bringing relief to every human being that has been so traumatized by Dorian.

It looks like there’s going to be a challenge for Water and Power in Grand Bahama. Everybody is working feverishly to do their best. Most of the downtown businesses can’t reopen as most were under five to six feet of salt water.

We built our Callenders offices six feet above ground even though there had never been a flood that high downtown. In hindsight we should also have lifted the generator and air-conditioners up six feet as well. The water reached the last step. It didn’t go into our offices, but the air conditioners and generator went under.

The offices were built as a shelter, but many of our staff had a rough time because the power went out quickly and all of their vehicles in our car park were destroyed. Our family of employees, many of whom have been with us for nearly 30 years are in a bit of a daze, cleaning out their homes as best they can with no water and no power in the heat and stench of salt water flooding.

Grand Bahamians are exhausted. We have been regularly hit with damaging hurricanes over the recent decades.

Freeport’s infrastructure has been slowly collapsing for lack of investment. It’s just growing old. Most of the infrastructure, which envisaged a city of 300,000 people, was built between 1955 and 1970. Lack of maintenance and financial inability to rebuild and recover after hurricanes have greatly contributed to its unfortunate decay.

Freeport could still become the Venice of the Caribbean. Most people do not have an appreciation for the scale of the infrastructure. It would cost billions and billions to build today. A tour through the many canal systems, the miles and miles of roads to nowhere, and empty subdivisions of land would startle a rational mind!

It’s really been a disservice to The Bahamas that no government since 1968 has appreciated the value of this infrastructure to capitalize on it for the Bahamas by letting go of the obsessive and irrational political strangulation of Freeport. Sadly, Freeport is just going to waste while successive governments focus on agreements for relatively miniscule developments which pale into insignificance compared with the potential of Freeport.

I’m glad that Carnival and others have recommitted to their investments to help resurrect GB.

But in East GB the oil is leaking from STATOIL. Hopefully this will be a wake up call to pass an environmental protection act and NOT to continue to promote the development of the Oban oil refinery in East GB.

An oil disaster in East GB will affect the southern coast of Freeport to West End as the prevailing current is from the south east. It will destroy all our beaches and marine life.

If Oban is allowed to go ahead, and critically, if the STATOIL situation isn’t quickly fixed, it may affect Carnival, Royal Caribbean and other developers who may not want to invest because of the danger of oil pollution migrating to our pristine tourism resources.

As we can see the world loves The Bahamas. Let’s seize the moment and show them what a beautiful country we can be.