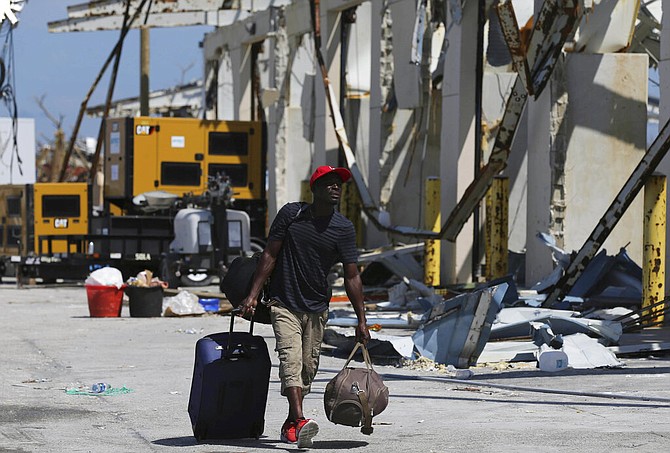 A man in Marsh Harbour carries his belongings to a ferry to depart for Nassau on Sunday. (AP Photo/Fernando Llano)

MORE than 3,000 people have been evacuated to New Providence in the wake of Hurricane Dorian.

According to National Emergency Management Agency spokesman Carl Smith yesterday, 3,500 people have come to the capital from Abaco and Grand Bahama, but only 860 persons have needed to be housed in approved shelters. There have been a number of other evacuations carried out by civil society.

Officials have also worked on short and long-term plans to accommodate evacuees.

John Michel Clarke, chairman of the Disaster Relief and Reconstruction Committee, said a temporary relief facility with a capacity to hold 4,000 is also in the works.

As it stands, 422 people are being housed in the Kendal Isaacs Gym; 202 at the Fox Hill community shelter; 91 at Calvary Baptist shelter; 50 in the Salvation Army and 95 at Pilgrim Baptist Temple on St James Road. Another shelter was opened yesterday morning in Adelaide. However, the number of people there was not provided yesterday.

Mr Smith said yesterday there was no mandatory evacuation for Abaco.

He further warned that the Department of Civil Aviation would revoke authorisation of any air carrier charging passengers for evacuation flights. Last week, Bahamasair had charged a $75 one-way fee to evacuate Abaco. Officials have since discontinued this fee, adding anyone who paid it should be refunded.

“The way that that facility will be designed will be for temporary relief in the short-term.

“As a staging area, in the mid-term for the reconstruction effort and as for a permanent development in the long-term so that we’re not bothered about spending money twice.

“So what we want to do is we want to make sure that we get the planning for that effort absolutely correct.”

“NEMA and its partners have not commenced any large scale debris cleaning in Abaco. Search and recovery is still being conducted particularly in Marsh Harbour. We are aware of rumours about bulldozing in The Mudd. These are false reports.

“NEMA has directed a 50-member team from the Unites States Agency for International Development and the Office of Foreign US Disaster Assistance to work with the Royal Bahamas Defence Force to do a systematic sweep of the island.

“The island has been put into a system and the recovery team will check each section for persons who are still alive, any bodies that need to be recovered, and to check for hazardous material.

“Only after each section is cleared will NEMA and its partners move to the next phase of operations, which includes debris removal and I want to indicate here that where diseased bodies are discovered they have been handled in a most respectful manner properly and professionally handled.”

Officials said yesterday that the official death toll remains at 43.

However, a statement by the Royal Bahamas Police Force later said that 45 bodies have been located - 37 in Abaco and eight in Grand Bahama.

“We anticipate the discovery of more bodies as the process of search and recovery progresses,” the RBPF said.

The statement added: “There are many more persons presumed missing and we are appealing to the public to file Missing Persons reports, with the police, of those persons who have not been seen since the passage of Hurricane Dorian.

“We offer condolences to those families who have had loved ones die during the storm. And every effort is being made along with our local and international law enforcement partners to bring closure.”

Health officials have also urged residents of Abaco, Grand Bahama and surrounding cays not to drink or consume ground water due to the potential of contamination. Residents are asked to use clean bottled water for drinking, food preparation or hygiene purposes.

No one believes anything NEMA has to say or report anymore. They have deservedly lost all credibility and are now really nothing but a spin-tool for whatever deceitful message the incompetent Minnis-led FNM government wants to portray to Bahamians and the outside world. NEMA officials may as well be transferred to the government owned TV station (ZNS) and put on its payroll as TV reporters spouting government propaganda.

The 3,500 is by NEMA, this does not include all those taken by private planes and boats, so the actual number will be much higher. However NEMA can only give the number they know.

That's the problem! They know nothing and never knew anything!!

How are they meant to know each and every person that comes off the islands?. Are they meant to have a NEMA official at every single marina and dock in The Bahamas to make sure each person is counted? That would be a waste of manpower.

A more practical solution would be to have official landing zones for boats (planes have to go to the airport). Immigration officers and or police/RBDF should be present at these zones and metal detectors should be available as well. We need to know who is moving through the islands and ensure no contraband or weapons are being transported to Nassau.

Surely NEMA knows few people are left in Central & North Abaco. It's pretty much a vast ghost area right now except for the defense force and police personnel still stationed at the airports and seaports, and of course the marauding gangs of illegal Haitian aliens. NEMA certainly knew the approximate population of Central & North Abaco before Hurricane Dorian made landfall - well over 15,000. So how is it NEMA cannot even arrive at a crude estimate of how many survivors may have ended up in New Providence? Abaco survivors certainly didn't flee to Dorian devastated Grand Bahama. A thousand or so of them at most would have been able to flee to the U.S. Very few would have ended up in the North Eleuthera area or other islands other than New Providence. It stands to reason that upwards of 10,000 individuals from Abaco alone have ended up in New Providence but NEMA conveniently remains mum on this and would rather throw out to the public only the 3,500 that it claims was evacuated to New Providence by NEMA itself. And when will we get a rough estimate of the number relocated from Grand Bahama to New Providence? Knowing how many remain tells you how many have fled and we know most have fled to New Providence.