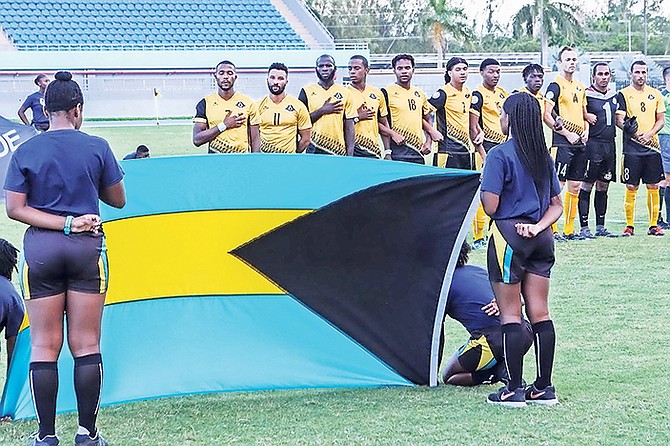 Playing with a heavy heart as he led in the hurricane relief efforts for Abaco and Grand Bahama, an emotionally charged Happy Hall and and his long-time team-mate Cameron Hepple lifted the Bahamas in a celebratory mood with a 2-1 victory over Bonaire last night at the Thomas A Robinson National Stadium.

"It's been a long week. We put our heart and soul into this game," said Hall, who juggled helping to prepare packages and picking up persons who evacuated from Abaco and Grand Bahama after the passing of the monster storm Dorian. "We're here to show the world that we can play soccer and this is our first stop. This is one of the best teams that we have put together in a long time and there are still a few pieces left in the puzzle, so once we put it all together, we can prove that we are a winning team."

Trying to hold back the tears as he talked about the ordeal that the country experienced with the devastation left behind by Dorian, Hall said there could be no way to help to sooth some hearts by winning this match. After the Bahamas missed a penalty kick from the side that hit the post, Hall managed to get in the front of the post to knock in the game's initial goal within the 49th minute of play in the second half on a header.

The Bahamas came close to getting another goal on another penalty shot from midfielder Cameron Hepple, but his shot was just wide of the goalpost in the 62nd minute. Moments later, there was a brief confrontation of players from both teams getting a little physical.

After they settled down, the Bahamas went back on the attack.

At the 78th minute on an assist from forward Terry Delancy Jr, Hepple finally got to celebrate as he booted in the second goal through the defence of Bonaire. "It was amazing. It always feels good to score for our national team,' Hepple said. "After taking a four-year break and coming back, with the guys that we have, this is amazing. This is the best team that we had. With all that we went through in camp, to come out with the win, I'm really proud of all of the boys and our coaching staff (led by former player Nesly Jean)."

Hepple said it was a massive victory for the Bahamas as the team played with a heavy heart. He said it was a lot different because the country needed the victory and they didn't want to let them down.

Bonaire, however, refused to give up and in the 93th minute, Yurick Seinpaal took advantage of a free kick, but it was a little too late and not enough to get past the highly spirited Bahamian team.

"I was not that happy with it, but also not that disappointed," said Bonaire's head coach Briam van den Bergh. "We did very well in our last game, but the time for preparation for this game was very short. "The Bahamas did a great job. They were very prepared and they put it on the field. They were compact and they deserved to win. We had our chances, but we didn't capitalise on it."

Bahamas was the more aggressive team in the first half, although they failed to cash in on the numerous opportunities to score.

Among the dignitaries at the game was CONCACAF general secretary Philippe Moggio, who came in town for a brief visit and to bring remarks of solidarity and his organisation's support for the Bahamas in the wake of the devastation from Hurricane Dorian.