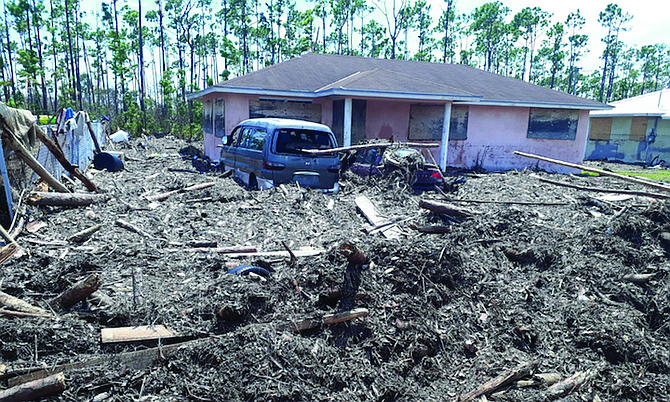 A FLORIDA man has purchased 100 generators to help Bahamians in the aftermath of Hurricane Dorian.

His generous donation, worth over $49,000, is one of several relief efforts to aid Grand Bahama and Abaco after these islands were devastated by the monster storm last week.

Yesterday, Amazon CEO Jeff Bezos announced the company will be sending two Amazon Air planes packed with “tens of thousands” of supplies to the Bahamas.

The Grand Bahama Port Authority (GBPA) also said yesterday it will be establishing a “transparent fundraising mechanism”, known as the Grand Bahama Disaster Relief Foundation (BGDRF), to assist the island.

Hurricane Dorian, a Category 5 hurricane, made landfall over Abaco and Grand Bahama on September 1 and 2, leaving unprecedented destruction in its wake.

Yesterday, the National Emergency Management Agency stated 4,800 people from the affected islands have been evacuated to New Providence thus far.

In the wake of these horrific circumstances, the local and international communities have stepped up to assist.

The generous Florida donor, who wishes to remain anonymous, purchased the generators from a Costco in Jacksonville, Florida last Wednesday, according to CNN.

“About 100 generators and a truck load of food and chainsaws are all going over by boat on Thursday to Marsh Harbour in The Bahamas. It’s terrible and I’m sure you’ve seen the photos,” the farmer told CNN at the time.

His good deed was publicised after another shopper spotted the transaction and snapped photos of the donor and the generators from behind.

Errol Thurston, an Abaco resident and “longtime friend” of the farmer, is assisting in helping the generators get to The Bahamas.

“We are trying to book a slot on a container ship that regularly services the Abacos and Grand Bahama,” Mr Thurston informed CNN. “The guys are doing everything in their power to get us in a slot there. They know the desperation the people really need these items.”

If the wait time for this takes too long, Mr Thurston also outlined his second option to CNN.

“We have a lot of guys with planes to take it over. There are hundreds of local captains with boats who are ready on standby to take the generators and chainsaws by boat,” he said.

“We’re sending two Amazon Air planes packed with tens of thousands of Amazon-donated and customer-donated relief items to support those impacted by #HurricaneDorian in the Bahamas,” he tweeted. “Thanks to all the teams who are making this possible. http://amazon.com/disasterrelief.”

As the GBPA announced its own initiative to help the battered island, it underscored the importance of this “fundraising mechanism” in a statement released yesterday.

“What we have seen thus far is truly an outpouring of concern for the people of Grand Bahama, and it is our intention to ensure that all of that aid is being distributed in ways that it can provide the most impact for those affected,” said GBPA executive director Rupert Hayward.

According to the statement, the GBPA established the GBDRF as “a transparent fundraising mechanism designed to specifically receive and distribute donations to the relief effort in the nation’s second city now and into the future”.

“Already, the GBDRF has provided first responder services and headed search and rescue missions into East Grand Bahama which bore the brunt of Dorian’s wrath,” the statement continues.

“Over the past week, the foundation has been working to improve its logistics capacity, setting up work stations on both the local and international fronts as a means of raising awareness about the needs of those impacted on Grand Bahama Island.”

Mr Hayward also noted the organisation has been “working tirelessly” with the GBPA, GB Utilities, and the Grand Bahama Power Company “to ensure that essential services such as water and electricity can be restored to the island quickly and safely”.