Stateside: Time To Think The Unthinkable - Even When Running For The Presidency 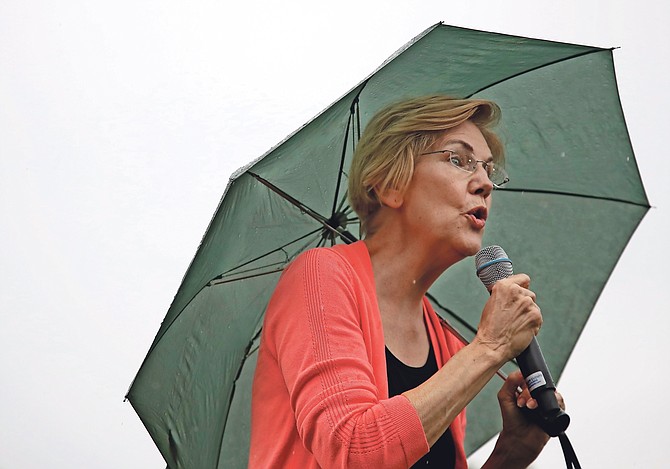 Democratic presidential candidate Sen Elizabeth Warren, D-Mass, at a campaign event on Monday. She set the tone among Democratic candidates for the conversation on climate change in a “Climate Town Hall” event on CNN.  Photo: Elise Amendola/AP

Hurricane Dorian moved off the major American front pages yesterday, replaced by news of US President Trump’s firing his fourth National Security Adviser, John Bolton. Bolton insisted he had resigned; he wasn’t fired. Maybe that was part of the communications problem between the two men. More on that later.

Dorian may have moved – slowly, of course – off the front pages in Washington and elsewhere. The heinous hurricane left behind a rising body count in Grand Bahama and Abaco, with every property damage estimate exceeding the one it replaced.

American and other international relief efforts continue, and we can only hope that the foreign assistance is maintained long enough to make a real difference.

In the storm’s wake, questions are being asked anew about global warming. Most reputable science supports the notion that human activity is contributing to the evident overheating of earth’s atmosphere, and the resulting frequency and intensity of major weather events such as hurricanes.

Are the nations that are most responsible for atmospheric overheating able to learn anything from tragedies like Dorian? There’s evidence on both sides of this question from right next door in the US, which still has the world’s largest economy and is, by any measure, a major culprit.

The good news: less than a week before Dorian wreaked its human and property destruction on the northern Bahamas islands, most of the remaining Democratic candidates for the American presidency participated in what TV sponsor and host CNN billed as a “Climate Town Hall”.

These Democrats are all vying first and foremost for their party’s nomination, so their comments and positions must be filtered through the lens of appealing to their party’s most active, left-wing base. But even taking their remarks with a big grain of Great Inagua salt, there is significance and some hope in what they had to say.

Massachusetts Senator Elizabeth Warren, who is rising slightly in the polls because of - or is it despite? - her earnest dedication to clear policy positions and refusal to accept most corporate donations, set the tone.

“You may remember that Gov Jay Inslee (of Washington state) said, ‘Let’s get tough on this (issue of climate change)’,” Warren reminded the TV audience. Warren then unveiled a plan calling for $3 trillion to be spent on various environmental initiatives.

Extensive as such a plan might be, given its price tag, Warren’s proposals seem almost trivial compared with those of some of her rivals, who are suggesting plans that might cost as much as $17.3 trillion spread over decades. Inslee, who had based his candidacy on the fight against the deleterious consequences of climate change, dropped out of the race weeks ago.

The significance of all this is less the astonishing proposed price tags than the fact that these Democratic hopefuls are talking about the issue at all. Just three years ago, for example, candidate Hillary Clinton uttered countless platitudes about climate change and the need for government policies that were greener.

She never mentioned a carbon tax.

Questioned by CNN about her support for a carbon tax, Warren jumped in with a strong, affirmative response. She had not itemised this in the official policy proposal handed out to reporters before the town hall.

Why is this important? Carbon taxation support has long been viewed as political suicide. Opponents have been successful in portraying a levy on business and industry that exceeds stringent federal carbon dioxide emissions standards as a measure that would raise the cost of anything that must be transported to the marketplace.

Support for a carbon tax would thus increase the price of almost everything, especially in a diverse, supercharged economy like the United States. It’s not surprising that Barack Obama, idealist but also pragmatic politician, made only a cursory attempt to impose a carbon tax on American industry, even with a Democratic majority in both houses of Congress at the beginning of his term.

The Democrats, like all politicians, want to get re-elected. That they see potential gain in promoting measures like a carbon tax is encouraging for those who believe human activity is accelerating the earth’s overheating.

If only we’d listened

Amid all the political noise about climate change and the tragic reports of hurricane-related death and destruction in The Bahamas, it’s perhaps ironic that the most influential environmental economist of recent times passed away a couple of weeks ago.

Dr Martin Weitzman, a Harvard professor and indefatigable advocate for the potential for economic remedies to mitigate the effects of climate change, wrote a seminal paper 45 years ago entitled “Prices vs. Quantities”.

Weitzman’s Harvard department boss said the treatise was “the most often cited paper in environmental economics”. The central thesis was that use of macroeconomic measures such as a carbon tax could help to protect the earth’s environment.

Carbon tax and other environmentally friendly ideas like cap-and-trade have largely languished until now on the US political front. But while Weitzman did not live to see his favoured policies enacted in law or regulation, he had awakened the American academic community to the dangers of climate change.

He could have been speaking right now in Nassau or Freeport or Marsh Harbour when he told a Harvard interviewer years ago that “most economic models are far too conservative”. Climate change is “outside the range of most of our models. They’re outside the range of our usual thinking, so there’s no way we can really pin down the probability or magnitude of a catastrophe.”

Weitzman’s wisdom will be missed. Maybe his words will now inspire greater action on climate change.

John Bolton never gave much evidence that he cared about climate change. This brilliant but prickly conservative hawk had staked out for decades a warlike position to the right of many in his adopted Republican Party. Skilled in the political gamesmanship that often determines success in Washington policy debates, Bolton served for decades in senior policy positions at the State Department, the United Nations and the White House.

Enthusiastic in advocating the use of military force against nations whose policies he judged to be inimical to America’s national interests, he may be best known for his prescriptions to bomb Iran, Iraq and North Korea as those nations displayed unacceptable behaviour.

Few thought his tenure as Trump’s National Security Adviser would be long-lasting, and their doubts were well founded. In resisting Trump’s instinct to broker some kind of peace agreement on Afghanistan, Bolton ultimately ran afoul of Trump’s great hallmark: he keeps his campaign promises. And one of those promises was to bring back American troops from ill-advised foreign conflicts.

Another famous Trump campaign promise: Build the Wall. Bolton should have known better.