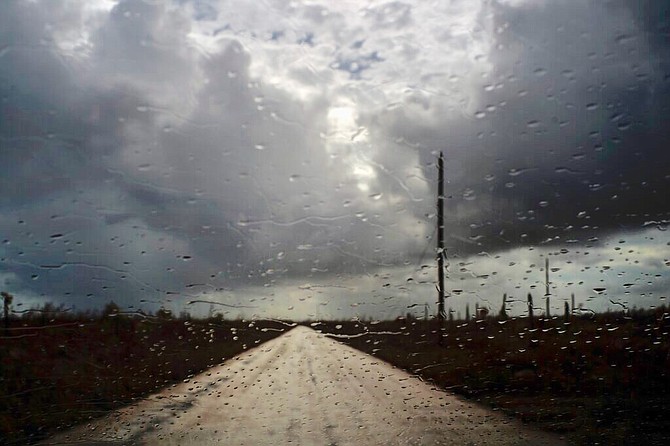 6.40pm UPDATE: The government has discontinued a tropical storm warning as Humberto moves away from the Bahamas.

The U.S. National Hurricane Center says Tropical Storm Humberto is expected to become a hurricane by Sunday night or early Monday, but it won't threaten land by the time it intensifies to that strength.

Officials warn that the storm could still cause dangerous swells in the northwest Bahamas and along the coasts of Florida, Georgia, and South Carolina later this weekend and early next week.

Tropical Storm Humberto took an unexpected and very delightful turn to the east throughout the night, and, is now expected to move northwestward to the east of most of the islands according to the National Hurricane Centre

1) For those residing in Grand Bahama and Abaco - with particular reference to Marsh Harbour and Cays - Tropical Storm Humberto will most likely pass to the East of NW Bahamas over the next 24Hrs bringing gusty Winds [30-45 MPH] rough seas and heavy rains & T- storms.

2) National Hurricane Centre states in its 8AM advisory it does not expect any storm surge related to the tropical storm Humberto.

3) Those with compromised roofs, damaged residents or low lying areas should be on the lookout for heavy rains and/or flash flooding due to the saturated ground.

As always please stay abreast with all Alerts from NEMA and the Office of the Prime Minister.

• From the Associated Press

Humberto's arrival coincides with a weekend visit to the Bahamas by U.N. Secretary-General Antonio Guterres aimed at supporting humanitarian aid efforts in the wake of Dorian, which reached the islands as a massive Category-5 storm and left thousands of people in need of food, water and shelter.

Threatening to exacerbate the problem, winds and rains from Humberto could be expected in Grand Bahama and the nearby Abaco islands, said chief meteorologist Shavonne Moxey-Bonamy.

"I know it might be a bit of a disheartening situation since we just got out of Dorian," she said.

At 8 a.m. EDT, Humberto was located 30 miles (45 kilometres) east-northeast of Great Abaco island, according to the U.S. National Hurricane Center. It had maximum sustained winds of 40 mph (65 kph) and was moving northwest at 7 mph (11 kph). There was a tropical storm warning in effect for the northwest Bahamas, except for Andros Island, and 2 to 4 inches of rain was expected, with isolated amounts of 6 inches.

Humberto is forecast to become a hurricane by Sunday but is expected to stay offshore of Florida's eastern coast as it moves toward open waters. Portions of the coasts of Florida and Georgia will see 1 to 2 inches of rain.

The hurricane centre said most of the heavy squalls were occurring north and east of the center of the storm, which was passing just east of Abaco. However, government officials in the Bahamas took no chances and urged people in damaged homes to seek shelter as they announced that aid efforts would be temporarily affected.

The distribution of meals in Grand Bahama was reduced ahead of the storm, and a spokesman for the United Nations World Food Program said all flights into its logistics hub in Marsh Harbour in Abaco were suspended.

"We are back in storm preparation mode again, unfortunately," he said.

Guterres said he hoped the weather will allow him to visit the islands and see the impact for himself.

"In some areas, more than three-quarters of all buildings have been destroyed. Hospitals are either in ruins, or overwhelmed. Schools turned into rubble," the U.N. secretary-general said in a prepared statement ahead of the visit.

He said thousands of people continue to need food, water and shelter, and U.N. humanitarian agencies are on the ground to help them.

"Our hearts go out to all the people of the Bahamas and the United Nations is right by their side," he said.