Face To Face: Bahamians Will Continue To Make Valuable Contributions To The Us – If Given The Chance 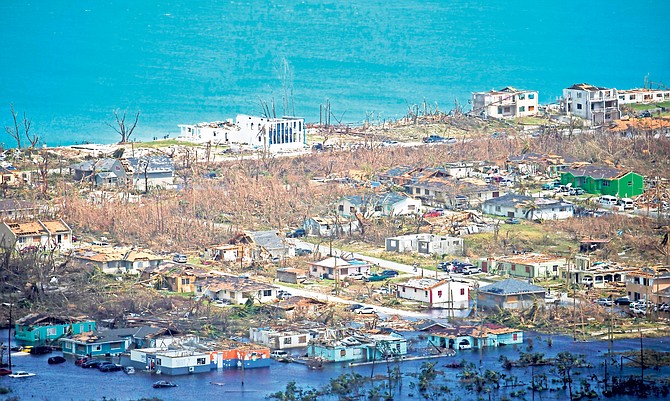 THERE was a time when tens of thousands of Bahamians migrated to the United States of America. It was 1943, and World War II was still raging. Many Americans were drafted to serve in the armed forces. Others left the farms to work in more profitable war industries. This resulted in a shortage of labour in every sector of the economy, including agriculture. Food security was vital to win the war, and so there was an urgent need for people to work on farms throughout the United States.

The British West Indies Labour Program allowed an estimated 30,000 Bahamian men and women to temporarily migrate to the United States between 1943 and 1965. For 23 years, The Bahamas and the US had a mutually beneficial arrangement. Bahamians were paid; a portion of their earnings was placed in savings and a portion went home to loved ones. They started out picking oranges in Florida, but eventually the programme grew to include picking beans in Maryland, working on farms in New Jersey or working in packing and processing plants in New York, and so on.

Bahamians disembark from an airline that brought them to the US for work on the Contract. Photos: Jessica Dawson and Tracey L Thompson/ramblebahamas.org

Most Bahamians returned home and were able to start businesses from their savings and be in a better financial position. Others came home to a myriad of family issues which resulted because of their absence. Some Bahamians were regularised and stayed in the US, becoming upstanding members of society. All in all, “the Contract” or “the Project” resulted in Bahamians making a positive impact in all of the states where they were sent to work. Even today, you can find Bahamians who are contributing greatly to the communities in which they live throughout the United States. Tracy L Thompson, oral historian, documents much of this and points out that great nation builders came home from the contract, like Sir Clifford Darling and Amos Ferguson.

Bahamians’ deepest anchor in the US may be in South Florida. In the 1800’s, there were very few permanent residents in the area that is now known as the city of Miami. The first wave of immigration into Coconut Grove started in the 1870s, with settlers coming from the northeast United States as well as white Bahamians. The first hotel in Miami, The Peacock Inn, was established in 1882. It was located where Peacock Park now rests, right in the heart of “The Grove”. The first laborers of the hotel were black Bahamians who came up from Key West and the upper keys. They built their homes in the west grove which is now known to be one of the earliest permanent neighborhoods established in Miami.

These early Bahamian settlers built their homes differently from the other settlers. While simple in design and construction, the homes were built to withstand hurricanes and for that reason, some of them are still standing today while many of the other structures built during that period have disappeared. Their homes were elevated to prevent flooding, had strong cross-bracing to withstand gale-force winds, and had weatherproofing and shuttered windows to prevent blow outs. You can visit many of these homes in and around Charles and Williams avenues in Coconut Grove. I did so several years ago when I attended the Coconut Grove Festival. It is a delightful affair in Miami in which descendants and Bahamian food and culture lovers from all nationalities descend upon Coconut Grove to enjoy the festival. Bahamian music is played, there is a Junkanoo rush-out, and everything is decorated in Bahamian colours. People come out in droves and tow lines to order scrumptious Bahamian food. One of the homes features a tour inside. There, you can see how Bahamians lived in Miami back then, and the walls are covered with historical photos and information about many of the great people who helped build Miami.

I remember doing a story several years ago about Lemon City, Miami and the discovery of hundreds of Bahamian graves. A small group of determined citizens agitated for the protection of the cemetery that otherwise would have become a parking lot, six feet under cement. The land, owned by the YMCA of Greater Miami, was under development in April 2009 by the Carlisle Development Group and the Biscayne Housing Group, when archeological digs required by the City of Miami revealed human bones.

A memorial was erected in 2011, but seeing it is challenging, as the memorial hides behind a high-rise and remains private property. Most of the dead hailed from The Bahamas and were buried there between 1911 and 1935. Numerous infant bones showed that there was a high infant mortality rate among Bahamians in Miami. Today, a memorial is there, which includes the names of more than 500 people, but without any explanation. Local Historian Enid Pinkney led the fight for its preservation. But the memorial is currently not accessible to the public, as it sits on private property, according to the Biscayne Times.

Before Julia Tuttle and Henry Flagler, who were credited as the builders of Miami, black people, mostly Bahamians, were already there as the first settlers, the Miami Herald notes. They were prevalent in Coconut Grove, which is the oldest inhabited neighbourhood in Miami. They were also in Overtown, which was Miami’s Black Wallstreet and the Harlem of the South. Bahamians played a part in Miami’s incorporation in 1896 and helped to sign the city’s charter in order to form a new city.

Even as I write my Face to Face columns, from time to time I come across Bahamians doing outstandingly well in the various states they migrated to in all sectors of the economy. Considering this amicable relationship with the Bahamas and its nearest northern neighbour, cries can be heard for the US administration to consider revisiting its strict immigration policy in the face of one of the worst natural disasters to affect the region in recent history.

Hurricane Dorian has taken life and limb, and has obliterated thousands of homes in two of the most thriving of the Bahamian Family Islands. The capital, New Providence, will now grapple with increased loads on its infrastructure, social service programmes, employment sector, health and educational sectors, and so on. The Bahamas has taken a difficult blow from a powerful Category 5 storm.

An advert during the Second World War, when Bahamians went to work on American farms to assist in food security. Photos: Jessica Dawson and Tracey L Thompson/ramblebahamas.org

On Sunday, US immigration chief Ken Cuccinelli told CBS “Face the Nation” that “The Bahamas is a perfectly legitimate country capable of taking care of their own”. This came as a shock for many because last week, Mark Morgan, acting commissioner of US Customs and Border Protection, said it would be “appropriate” for Bahamians to receive TPS (temporary protected status) in the wake of Hurricane Dorian, The Huffington post reports. The status would allow Bahamians to temporarily relocate to the US to live and work while recovery efforts continue back at home. Seeing that southern islands are still rebuilding after the devastation caused by Hurricane Joaquin, it is safe to say that a storm of Dorian’s magnitude would require a considerable time for rebuilding.

I believe that just like in the contract days, many Bahamians would return home if granted TPS. Bahamians love their country. They spend millions of dollars each year travelling to the US to visit family and friends, and to shop or do business.

With such an amicable history, many Bahamians hoped that President Trump’s strict immigration policy would be reconsidered in the aftermath of this natural disaster. However, when the President let the American media know that he doesn’t want “people who weren’t supposed to be in The Bahamas to come into the United States… including some very bad people…”, hopes were dashed. It felt kind of like how the people must have felt in Freeport when they were told to get off the ship headed to America after waiting for hours to board… because their police records were not enough. People are devastated, still reeling from the shock and tragedy of the storm. Bahamians are sincerely grateful for the outpouring of love and supports from the US and around the world. Now, more than ever, many are hoping to make new lives for themselves.

This weekend, NBA star Golden State Warrior Klay Thompson spoke out, crying “shame on our current administration for not welcoming our Bahamian neighbours in their greatest time of need”.

“I’ve been so lucky to visit my family in Nassau since childhood, and in those times I’ve seen countless Americans use the Bahamian islands as their playground for letting loose and vacationing,” he said, “And now we turn our back on the people who welcomed us with open arms, when they’ve lost everything!?”

Twanette Keyser, a South African who calls Guana Cay home, was given six-months entry with her family into the United States. She notes that it will take about a year for power to be restored to her area in Abaco.

“I hope we’re allowed to stay because we don’t have anywhere else to go,” she said. Her brother, Henk Horn, a business owner in West Palm Beach, was a volunteer medical staff member in Freeport after Hurricane Dorian. Seeing the devastation first-hand, he appealed to his government to help Bahamians so “they can rebuild a life and give back”.

He said that Bahamians are not looking to come to the US to “freeload”, and that instead of forcing Bahamians to live and work illegally, the US government should grant them the opportunity to “become productive, tax-paying members of society”. “All anybody ever needs is an open door and they will make a success of it if they are dedicated and desperate enough,” he said, and “At the end of the day, that’s what humanity is for.”

My Grandmother worked the Contracts in Miami, Dad shot squirrels on the land that is now Miami Airport. I've got U.S. cousins scattered all over from Oregon to Texas to Fla, Georgia and N.C.

Trump has the opportunity to be a modern day Martin Luther King, by freeing the slaves in the Bahamas - saying to our tiny population "Abandon ship, and come dwell forever in the Land of the Free, helping to Keep America Great".

Imagine what great creativity and success the Potter's Cay stall vendors could have in south Miami? That's just one example. Dade County police would allow customers to drive up to the stalls. Just one example. Just one.