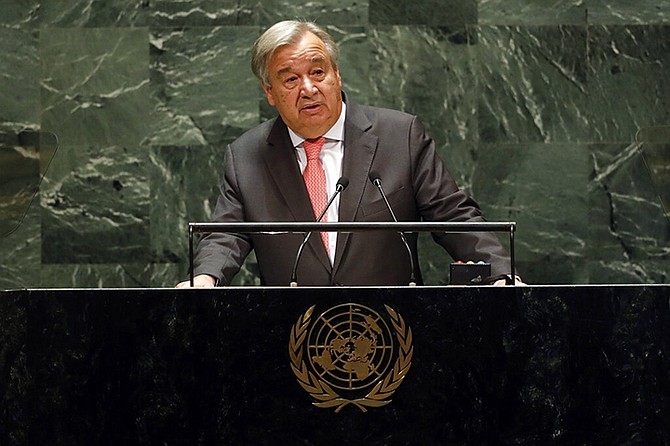 UNITED Nations Secretary General Antonio Guterres sounded the alarm on climate change at the UN's Climate Action Summit yesterday, saying images of Hurricane Dorian's destruction in Grand Bahama and Abaco will be seen more frequently if action is not taken.

"A few days ago, I was in the Bahamas where Hurricane Dorian pounded the country for two unrelenting days," he said at the summit, which was held at the UN's headquarters in New York. "The destruction was not simply appalling. It was apocalyptic."

Secretary Guterres noted the impact of other destructive weather phenomena on the world: in Tuvalu, people are fighting against rising seas; in Mozambique, residents are facing the after effects of unprecedented back-to-back cyclones.

"Seas are rising and oceans are acidifying. Glaciers are melting and corals are bleaching. Droughts are spreading and wildfires are burning. Deserts are expanding and access to water is dwindling, Heatwaves are scorching and natural disasters are multiplying. Storms everywhere are more intense, more frequent, more deadly," he said.

According to the Intergovernmental Panel on Climate Change, temperature rise above 1.5 degrees will cause major and irreversible damage to ecosystems.

"But science also tells us it its not too late," Secretary Guterres said. "We can do it. Limiting warming to 1.5 degrees is still possible. But it will require fundamental transformations in all aspects of society, how we grow food, use land, fuel our transport and power our economies. We need to link climate change to a new model of development - a fair globalisation - with less suffering, more justice and harmony between people and planet."

"As the scientific community has told us again and again, we need to cut greenhouse emissions by 45 percent by 2030; reach carbon neutrality by 2050; and limit temperature rise to 1.5 degrees by the end of the century. And we need to accelerate financial support. The replenishment of the Green Climate Fund is crucial, as is fulfilling the commitment by developed countries to mobilise $100 billion a year from public and private sources by 2020 for mitigation and adaptation in developing countries.

"Even if we succeed in reducing emissions, many people are already living with the dramatic effects of climate change. Adaptation has therefore become a top priority and an essential condition for increasing the resilience of countries and communities and avoiding human suffering."

Typical Marxist, lying thru his pointy little teeth. More storms such as Dorian? Really? And he knows this, how? He has no way of knowing, does he?

This clown is one of the orchestrators of the Greta Thunberg "you're all going to die" hysterical tour to pimp global warming.

The end game is global tyranny and to blazes with 'saving the planet.'

This old gasbag warns to expect more hurricanes unless what? Let me guess, we must all surrender our property, wealth, and liberty and live at a seventh century standard of living while he and his UN kiddie-rapers live like sultans with us as their slaves?

LEt's say more hurricanes are on the way? What's new about that? Nothing.

What's he going to do after the UN imposes global eco-tyranny, and the storms worsen?

What new lies will the communist thugs at the UN recite to fool the little people, to cover their old lies?

As the African potentate said, 'The UN is where I send my political enemies who aren't worth the trouble to execute."

Paul, despite the obvious idiocy in your comments, I am responding. There is something called science. Is it absolute? No. But most every modern convenience you and I enjoy comes from this way of thinking. That's what science is. A way of thinking. Yes, the earth is heating up. Go outdoors one day. You may notice it. Along with that comes a whole lot of other complications for living organisms, like us. Including an increase in intensity and frequency of hurricanes. Global eco-tyranny? As if we don't have economic tyranny? As if our lives and lives of our children are not ruled by sociopath corporate leaders? Where income inequality contributes to the suffering of billions? That's OK with you, but eco-tyranny is what you are scared of? Too little, too late, Mr. Paul. Where the vast majority of people on this earth struggle daily for their share of earth's resources while a handful, who often inherited every penny they have, own and control most of the world's resources. Or, are you one of those really smart Christians who still believe that God put this earth and all it's creatures here for us humans to use as we see fit? There are people like you, who will soon be ignored because nothing you say lines up with reality. You are like the fool on the Titanic who, despite the water rising in the cabins, still believes that the Titanic can't sink, because it is said to be unsinkable. And, if you want to say to hell with climate change, then what about the human caused extinctions globally. You do read, right? Have you not read anything that relates to this decimation of life on earth? Or, do you not go outside to notice for yourself the huge decline in marine organisms or birds in the trees, or animals in the forest? An accident? A message from your God? Or, could it be the result of uncaring, ignorant and greedy bastards called humans? Your comments disappoint me, Mr. Z.. Currently, we need all hands on deck to work to solve this problem. It becomes ever more difficult when those of us trying to raise awareness to these critical issues for our children are distracted by nonsensical adolescents such as yourself. You have in a few short sentences above, managed to show your complete ignorance on a number of important topics humans must contend with, immediately.

Don't know how old you are, but I can remember a time when a storm was a few lines in the local Bahamian papers, today if there is a thunder storm in Timbuktu it is on the weather channel for a week

sorry don't have FOX on my news outlets

was in Univ when hurricane Betsy blasted the Bahamas, it was not in any of the papers in Canada for days after the devastating storm has passed the Bahamas into the US

Every bad hurricane is the worst until the next one (remember Katrina). If we hadn't built so many homes in flood zones and had such shoddy construction and people evacuated, no where near the devastation that was experienced would have happened.

For all the science buffs and amateur climatologists out there, an honest question: after the first ice age how much did earth have to warm up for the ice to melt? Was it more than the 1.5 degrees we are not so concerned about now?

Fluxes in earths magnetic field and core are of far greater concern!

This thing that is causing mass hysteria is just a cycle!

The Laurentide Ice Sheet was almost 3 kilometres (2 miles) thick and covered North America from the Canadian Arctic all the way to the modern U.S. state of Missouri, 18,000 years ago thank goodness for climate change or we'd be all living in the equatorial belt

Well most of the world's climatologist say you're wrong....

When you righties stop talking bull about money and communism maybe we can have a real conversation about the fate of the planet....

Because there is in fact a problem.....

did you know the province of British Columbia 11 years ago has had a carbon tax to lower their GHG levels, want know the results of those taxes placed to change the behaviour for those using carbon bases products, the GHG have INCREASED

Very tricky, isn't it ? A few articles above, the gentleman speaks to numerous CAT 4's and 5's hitting the Bahamas from 1866 to present . Did we cry Global Warming in 1866? I can't speak for world leaders, but if they truly believed in Global Warming and tides rising, why did the former president of the United States , Barack Obama, purchase or attempt to purchase a 15 million dollar home on Martha's Vineyard on 29 acres of beachfront property? If he has all access to information in the world and buys a beach front home , what does that say about Global Warming?

it says it is an attempt to take money from anyone they can, a UN scam, headed by people as Al Gore etc

Paul Vincent, you are so right!

Second strongest of the century. And there was Irma and Maria just two yrs ago.