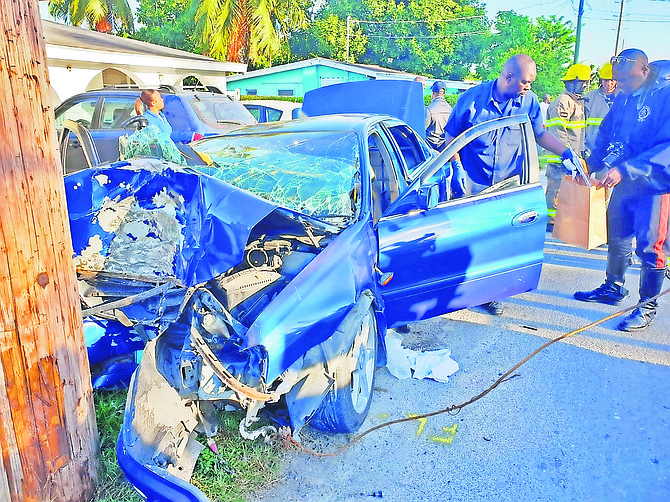 The scene of the crash on Baillou Hill Road. 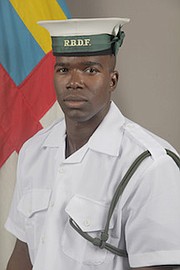 2.35pm UPDATE: The man who died in Sunday morning's crash has been named as Marine Seaman Arnold Amerthil. In a statement, the Royal Bahamas Defence Force paid tribute to him: “The Royal Bahamas Defence Force (RBDF) mourns the passing of Marine Seaman Arnold Amerthil, who died in a traffic accident on September 29, 2019. He was 27 years old.

“Marine Seaman Amerthil enlisted in the Royal Bahamas Defence Force as a member of New Entry 55/Woman Entry 24 on January 11, 2018. After completing New Entry training, he was assigned to the Squadron Department aboard HMBS NASSAU, where he served as a seaman. He also sailed aboard several Defence Force Class vessels.

“The Commander Defence Force, Commodore Tellis Bethel, extends sincerest condolences on behalf of the members of his Executive Command, Officers, Warrant Officers, Non-Commissioned, and Junior Marines of the Royal Bahamas Defence Force, and himself to the late Marine Seaman Amerthil’s Daughter: A’Kayla, Parents: George and Yasmin Amerthil, family, loved ones and friends.

“It is our prayer that God’s grace will provide peace and comfort during this time of bereavement.”

A MAN is dead after crashing into a utility pole on Baillou Hill Road early Sunday morning.

According to Chief Superintendent Craig Stubbs, shortly before 6am, the police control room received reports of a traffic accident on Baillou Hill Road, south of the farmer’s market. Responding officers arrived at the scene and confirmed that a single vehicle had run into a utility pole.

The driver was pronounced dead at the scene by EMS and the car’s passenger was taken to hospital with severe injuries.

CSP Stubbs said: “Our investigation thus far has revealed a Honda Saber was travelling south along the Baillou Hill Road corridor when, for unknown reasons, the driver would have went to the western corridor in the northbound lane and collided with a utility pole.

“From what we can see on the scene, the seatbelt not being worn, there was no braking marks, so it tells us a lot of mitigating factors as to what caused this accident. In our preliminary investigation and as we go forward, we’ll update the media and give more cautions to the motoring public on safe driving techniques.”

CSP Stubbs made an appeal to motorists attending functions on the weekend to travel with a designated driver.

Officers from the Traffic Department will continue investigations into this matter.

According to The Tribune’s records, there have been 17 traffic fatalities for the year.

In 2018, a total of 63 accidents resulted in 69 fatalities. According to police, 42 of the traffic incidents occurred in New Providence, while 11 took place in Grand Bahama and 10 in the Family Islands.