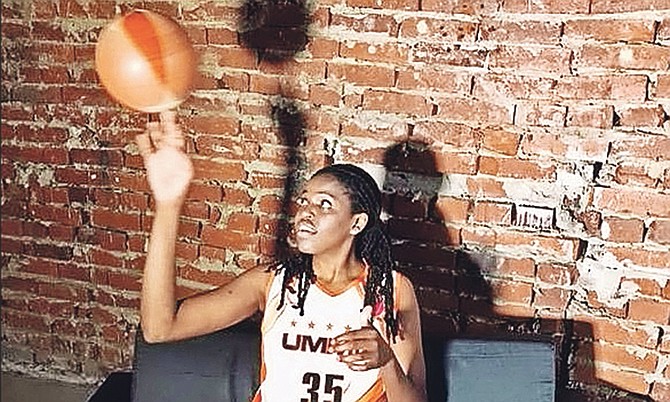 Jonquel ‘JJ’ Jones, the Bahamas’ top female professional basketball player, is back home in Grand Bahama after escaping Russia before the coronavirus pandemic exploded and now she’s urging Bahamians to heed the warnings by the government officials.

Jones, who helped to guide the Connecticut Sun to the Women’s National Basketball Association’s championship series last year, only to lose 3-2 to the Washington Mystics, spent the past few months in Yekaterinburg, Russia, where she played for the second consecutive year.

Her UMMC Ekaterinburg women’s team in the Premier League ended up with a perfect 16-0 win-loss record and they had only lost one game in the entire Russian League before the season came to a close due to the spread of COVID-19. “I’m back home right now and the only way I can deal with it being confined indoors is to do a lot of body workouts,” Jones said. “It’s a good thing that we have a decent yard that I can go outside and do some exercise, but I can’t do anything else really.”

Jones, 26, left Russia on March 19 and was self-quarantined for 14 days before she interacted with the public in Grand Bahama. However, her reunion was short lived as the curfew was imposed by the Bahamas Government.

“There were only a select few of my close friends and family that I got to see before the lock down,” Jones said. “Everybody else, I contacted on the phone or via social media.”

And how is she coping with the worldwide crisis?

“I try to stay off social media. I probably check my phone once in the morning when I wake up and just before I go to bed in the evening,” she pointed out. “I really don’t be on my phone a whole lot.

“I’m just hunkering down with my family and trying to use my time to stay fit,” she stated. “By the time we’re done with this, it will probably be time to go to the WNBA, so I want to make sure that I go back in some kind of condition.”

Prior to coming home, Jones said she was enjoying a great experience with UMMC Ekaterinburg, a team she felt was capable of matching up with any WNBA team with all the talent on their roster.

She started on a team that included Brittney Griner and Alanna Smith from the Phoenix Mercury; Courtney Vandersloot from the Chicago Sky and Breanna Stewart from the Seattle Storm and a few Russians.

“It was a good experience. I’m looking forward to going back next year and trying to finish the season off on a high note,” Jones said. “We didn’t complete the season, so we really didn’t know how good we would have been. But with the team we had, we knew that we could have easily won the championship title.”

“Compared to China, I think the European League is more competitive. With our team so stacked, I think we could have played against any team in any of the leagues.”

As she prepares for her return to the WNBA whenever they get started, Jones said the goal would be to redeem themselves by getting back to the final and hopefully winning the title that slipped away from them last year.

“I felt like we finally played up to our full potential to play for a WNBA title,” she stated. “But I walked away disappointed because we were just one game and one quarter away from being champions.

“So it was disappointing, but it also put a lot of stuff into perspective. I think all of us will come back from that experience more hungrier to go and get it done this year.”

The 2016 first round No. 6 pick overall out of George Washington got her first start in the WNBA All-Star Classic after she helped Phoenix to their best season ever.

“I need to be more efficient in the post. I felt I could have done a better job with that in the final,” she reflected.

“That’s one of the ways that I feel I can get better. Of course, I also need to work on my core strength to get it where it needs to be so that I can be able to bang with some of the stronger post players. I think I also need to be more aggressive in asking for the ball in certain situations and be able to attack the basket and not waiting for my team-mates to give me the ball.”

While there have been some cases of players in the Women’s National Basketball Association testing positive for COVID-19, Jones said the WNBA has had its share as well, including Phoenix. “While I was playing in Russia, one of our players, Theresa Plaisance, was playing in China and as I was talking to her on the phone, she said she came down with some of the symptoms,” Jones said.

“She didn’t realise that it was the virus until she returned to the United States. She went on television to talk about her experience. Thank God, she has since been cleared of it.”

Jones said the good thing is that when she was in Russia, there were no confirmed cases in Yekaterinburg. However, up to the time she was there, she said there were about 100 cases in Russia.

To date, there are more than 5,300 cases in Russia with about 355 recovered and 45 deaths recorded.

In her time of lock down in Grand Bahama, Jones encouraged all Bahamians to remain safe and follow the rules as outlined by the government.

“I think the prime minister is doing a great job just keeping us updated on everything,” she said. “Our country can’t handle a big outbreak like some of the bigger countries. The bigger and richer nations are having a hard time dealing with this.

“So the last thing we want to do is try to put a strain on the medical facilities with the doctors and nurses.

“So everybody needs to stay at home, be safe and wash your hands. These things can really help to eliminate the virus from spreading in our country.”

Jones said she knows that “everybody wants to touch the road,” but she noted that as soon as everybody obeys the laws, “we should be able to do it. But this thing is scary. We need to be better safe than sorry.”

She said she’s doing her part to stay safe because she’s eager to get back to the WNBA to continue her pro career.