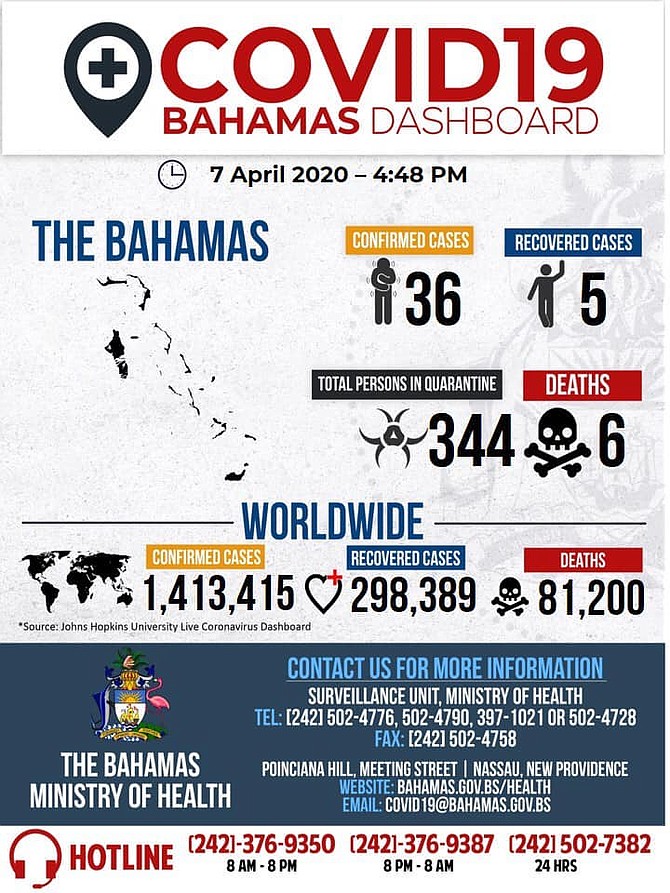 Meanwhile the number of cases has grown to 36, after three more people were confirmed to have contracted the virus.

The latest deceased victim has been identified by family as Frank Reid Sr.

He was last seen by his son and wife of 62 years more than a week ago, when they left him at the hospital because his condition due to COVID-19 had worsened.

His son, Frank Reid Jr, said the family is struggling with the fact that loved ones could not visit his father during his last days.

The 91-year-old was admitted to hospital last week Monday, but showed symptoms not too long before that. As a result Mr Reid said both he and his mother are in quarantine at home.

“It’s unbelievable,” he told The Tribune, “I still can’t believe it. Also in this current environment where we couldn’t visit or see or anything, you’re kind of flying in the dark.”

He remembered his father yesterday as a dedicated family man who worked hard for his three sons and wife. Mr Reid Sr was also a longtime educator who taught at several schools including D W Davis, H O Nash and schools in Arthur’s Town and Orange Creek Cat Island.

Ministry of Health officials have said the elderly man was case #20 and died overnight. He had no history of travel and investigations are being conducted into his death.

Meanwhile, the three newest cases are all residents of New Providence with no history of travel.

Health experts are urging the public to follow social distancing guidelines and stay-at-home orders to stop the spread of the disease.

The additional cases were confirmed the day after Prime Minister Dr Hubert Minnis announced a nationwide five-day lockdown, which will begin at 9pm tonight and last until 5am next Tuesday as the country fights the novel coronavirus.

“We will experience five days of pain, but a lifetime of resolution,” he said in the House of Assembly Monday.

He said such strong measures are needed because some people did not listen to warnings to take the COVID-19 threat seriously. Health officials, he said, need time to identify super-spreaders of the virus who may be asymptomatic. He also warned the increase in unemployment as a result of economic fallout from the disease will be “tremendous and greater than most of us have seen in our lifetime.”

I realize that we need to have an exam for any person who wants to become Prime Minister. No campaigning, being elected party leader or any of that nonsense. The person who scores the highest gets the job.

The questions should revolve around different scenarios and the first question could be something like:

If an infection is spread by person to person contact and you want to reduce spread you should:

c) use government policies to make every come out their house at one time and bundle up together like its Junkanoo, or