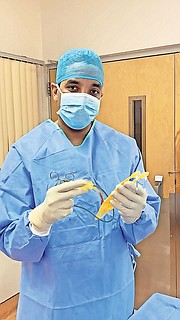 Since undergoing the first bionic penile implant surgery in the Bahamas, a local pastor’s life has been completely turned around – not only has his manhood been restored, but also his self-confidence and his joy in life.

“We have happy debates as to whether there can be too much of a great thing,” the pastor told Tribune Health about his and his wife’s now vibrant and frequent love making.

Pastor Philip*, whose real identity has been concealed to protect his privacy, spent thousands of dollars and many years trying to achieve an erection, all to no avail. Impotence drugs, a penile pump, and injections did nothing to help with his dilemma.

But after a lot of research, Philip came across Dr Greggory Pinto at Urology Care Bahamas here in Nassau. It was Dr Pinto who was finally able to solve Philip’s problem through the first bionic penile implant surgery to be performed in the country.

The surgery took place on December 28, 2019 and marked the commencement of a new partnership between Boston Scientific and Urology Care Bahamas to offer a new facet of world-class medical tourism at Doctors Hospital: cutting edge penile implant procedures.

It’s now been three months since the life-changing surgery. So far, things have been going extremely well for him and his wife. He said they are both reaching new levels of pleasure he didn’t know existed.

“Dr Pinto reassured me that I would be the stud of my greatest dreams and my wife’s wildest fantasies. I was getting zero erections for many years before the implant surgery, but now my wife loves to tease me and call me her young marathon man. I have been able to attain heights of pleasure that I truly never thought possible. I am 110 percent satisfied and I now live my life with a permanent smile.

“My wife has been overjoyed and completely satisfied by our love making...The love making is completely natural feeling and the implant allows us to be spontaneous and adventurous. The size of my male member is larger than it has ever been in my entire life,” he told Tribune Health.

Men who suffer from diabetes, hypertension and cardiovascular disease, as well as those with sickle cell disease, often have a high incidence of erectile dysfunction.

The advanced penile prosthesis is said to be a highly effective device with a very high rate of satisfaction for both the patient and the patient’s partner. The implantable device consists of two inflatable cylinders placed within the shaft of the penis, and these cylinders are connected to a fluid reservoir implanted in the groin with a small, easily palpable activating device within the scrotal sac.

“The device itself has become a part of my body and truly undetectable in my daily life, but when the moment arises, I can always rise to the occasion for as long as I want. I am truly blessed. I have had absolutely no discomfort and zero regrets. My wife looks at me and remarks that she can’t tell that I even had the penile implant surgery,” said Philip.

Philip struggled with achieving erections after undergoing a radical protectorate surgery several years ago. Ever since then, things were never the same. He even struggled with depression due his consistent inability to become erect in those intimate moments with his wife.

“The penile implant has given me a new lease on life, and it has filled me with joy and fulfillment,” he said.

“I was in the midst of a very dark chapter in my life prior to the bionic penile implant, as I had in essence been robbed of my manhood and self-confidence. I was not able to physically express love with my wife and that tragedy had me depressed and feeling hopeless.

“I am now a new man and I feel incredible happiness every single day. I now have greater sexual prowess than even in the best days of my youth. I am thankful for the kindness and selfless dedication urologist Dr Greggory Pinto has shown me in providing this rebirth for my life,” he said.

The AMS 700 penile implant – or bionic penis – is also the most popular in Boston Scientific’s extensive line of inflatable devices, as – according to medical experts - it perfectly mimics a natural erection and provides full rigidity when inflated, and a natural, flaccid feel and appearance when deflated. The AMS 700 bionic penis is currently the only penile implant on the market that can increase both the girth and length of the patient’s penis by up to 25 percent, according to Boston Scientific.

“The penile implant has been completely reliable and durable, and it always provides me an iron rod erection. I decide when I want that rod to become flaccid. The sensations during love making are intact and I can orgasm multiple times. I have had no complaints at all regarding the bionic penile implant,” said Philip.

Bahamian men who are struggling with erectile dysfunction, Philip said, no longer have to because thanks to advances in the medical field there is now a permanent solution.

“I can only regret not knowing about the penile implant surgery several years ago so that I could have avoided having years of despair related to no erections,” he said.

*Name has been changed to preserve the pastor’s anonymity