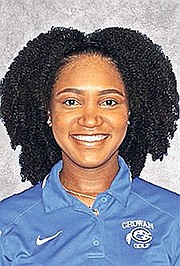 BAHAMAS Golf Federation national team stalwart Inecia Rolle received postseason accolades for her work off the course and in the classroom this past season.

The senior for the Chowan Hawks was named a Conference Carolinas 2020 Spring Scholar-Athletes of the Year when the organisation announced its annual awards yesterday.

Out of Murfreesboro, North Carolina, Chowan competes in the Conference Carolinas, a member of the National Collegiate Athletic Association (NCAA) Division II.

It marked the first Scholar Athlete of the Year award in school history.

To be considered, a student-athlete must have a cumulative grade-point average of 3.25 or higher.

Rolle, a psychology major with a 3.94 GPA, also captured individual medallist honours twice on the course in her senior season. She also had seven top 10 finishes over the course of the year.

Her senior season was highlighted at the Pfeiffer Invitational at Hilton Head Lakes. In a performance that was listed as one of the Hawks’ best of the year, she led the tournament from start to finish after an opening round 78 to shoot a one-over 73 on the final day to record medallist honours.

Prior to the season, Rolle spent the summer months locally assisting the BGF as an instructor for the junior programme. She also served an assistant coach for Team Bahamas at the Caribbean Amateur Junior Golf Championships held at the Albany Golf Course in The Bahamas in late July.

She was also an assistant coach of The Bahamas’ Caribbean Amateur Golf Championship team that competed in the Dominican Republic. The women’s team finished sixth for the George Teale Trophy.