Face To Face: From ‘Playing Doctor’ As A Child, Theresa’S Now In The Frontline Of Our Battle With Covid 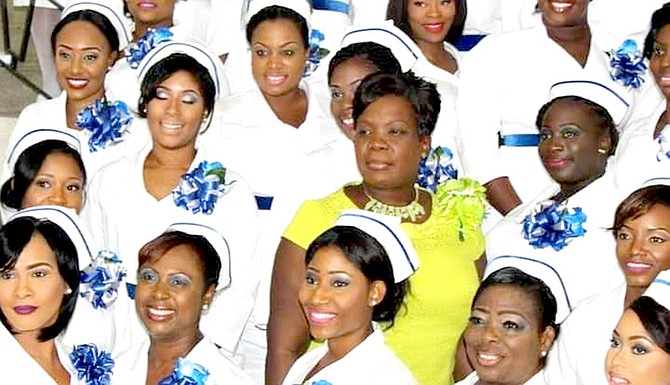 If all is well the latest national lockdown will lift next week. For that to happen experience tells us we will need to have seen a period when there were no new cases. This is what allowed our southern islands to be taken out of lockdown on Sunday.

Our hopes must be tempered by the reality that many people still don’t comprehend the make up of the virus responsible for this infectious disease and because of it, they may not be properly following orders meant to protect us.

One medical professional is seeking to change that by disseminating as much information as possible on SARS CoV2, the virus that causes COVID-19. For the past five months, she has been empowering members of the public with knowledge by educating on infection, prevention and control practices to reduce the risk of transmission.

Dr Theresa Moxey-Adderley has been at the forefront of community activism and service for many years now. I have seen her in action, and often with her husband by her side (which is extraordinary and commendable). She is full of positive energy and works hard to make community causes come to life. Among them, she is the President of Zonta Club of New Providence and through this organisation, Theresa has been going into communities advocating for an end to violence, especially against women and girls. She has encouraged victims to speak out and has been big on educating the public on issues from health to family matters. So it was no surprise to find her leading the charge in educating the public about COVID-19.

An Associate Professor of Nursing and Allied Health at the University of the Bahamas Nursing School, Grosvenor Close, her passion for the health of her people was heightened by this pandemic. To find solutions to help her fellow Bahamians, she conducted a research study on 162 college students aged 18 to 56 years to assess their knowledge, prevention and control practices of COVID-19. She also conducted a pre-test on nearly 3,600 professionals working in various fields during several workplace protocol training sessions. These sessions were organised and facilitated by Early Access Training Centre. Theresa is the Programme Director and she was instrumental in preparing these business owners and professionals for the reopening of their businesses after the first phase of lockdown was lifted by Prime Minister Hubert Minnis.

Her survey revealed that many people have a poor understanding of what a virus is to begin with. Coronavirus disease (COVID-19) is an infectious disease caused by a newly discovered strain of the coronavirus. Some 80 percent of the students, and 98 percent of the non-medical participants responded incorrectly to the question: “Is coronavirus a living organism?”

Because viruses are non-living organisms, it requires people to transport the viral particles around to different locations and then on to surfaces like tables and doorknobs. The virus needs the host to touch the infected surface and transport the particles. So, the quick ride to an establishment can mean you touching an infected surface, then your face, and then it enters your body and replicates. In the study, hardly anyone recognised that element. Theresa said this is why the advice to stay at home during the pandemic is so important. The widespread misconception about what viruses are and how they operate may have played a role in the spike in cases.

“A false sense of security has consequently manifested amongst the general public, leading to many believing that they were protected when they actually were not,” she explained. “Consequently, people took risky actions they realistically should have avoided.”

Although 88 percent of the college students knew COVID-19 spreads via the respiratory droplets of infected people, 58 percent of them didn’t recognise the clinical symptoms of COVID-19 included symptoms similar to the common cold or flu. If people don’t know the symptoms they have may actually be COVID-19, they may unknowingly put others at risk by not isolating themselves.

The survey also revealed almost half of the students went into a crowded place or joined a long line in the seven days immediately preceding the survey.

“Physical distancing, standing at least six feet away from people not in your household, is an intervention intended to control the spread of the coronavirus,” Theresa said, “While social distance is more toward reducing the amount of time going out into public.”

“By reducing the frequency of physical contact with a potentially infected person, the disease can be suppressed, resulting in fewer cases.”

The study showed not enough people were adhering to social distancing guidelines, such as remaining away from gatherings and settings.

Back in mid-April during the height of the first wave, Theresa worked on developing several online Infection Prevention and Control (IPC) courses for preventing the spread of the infectious disease in the community.

Theresa noted: “In the third phase of reopening, we were able to continue with the online format and also meet in small groups.”

During the in-person training sessions, small droplets of “germ glow” were placed on different surfaces before the student registered. During the session, students were asked what they touched while waiting for class to begin. Despite being re-sanitized in some instances twice before class, several individuals, after having the blue light shines onto their palms, still showed evidence of the germ glow substance. By doing this exercise, Theresa was able to demonstrate to these professionals how to properly wash their hands for a full 20 to 30 seconds, among other critical sanitization practices.

This wealth of knowledge in health and passion for people is the result of Theresa’s consistent effort to set the bar high for herself. She has always been a leader and displays this strongly in the health industry. Immediately after returning home from her studies, Theresa introduced the first Patient Care Technician (PCT) programme to the country in 1998. At the same time, she was integrally involved in the establishment of the first Bahamas American Heart Association Training Centre. Through her involvement, both programmes, the PCT/ PCA and AHA BLS training has become a household name in healthcare in The Bahamas.

Later, she joined the School of Nursing and Allied Health Professionals (UB) in 2000 and during her time as Chairperson, she was instrumental in seriously increasing graduating nurses from about 25 to more than 80 per year. This move had an impact on national development. Over the years, because of her vast experience, she has been invited across the globe as a presenter and teacher. Her most recent assignment was in Tangliao, China where she taught research to over 200 nursing students.

This pioneer in nursing in The Bahamas was born to Reverend Thelcene Simms, a native of Masons Bay, Acklins Island, a heritage of which she is proud. She has six siblings, and recalls her mother always told her she would be a nurse.

“I remember early on, I would play doctor in the yard with stray animals,” Theresa recalls. “My brother and I would go outside and say we were attending to the sick animals. My grandmother was also my first human patient. She was diabetic and blind, and I technically practised on her. My first job, however was at Doctors Hospital as a nurse’s’aide. At that time, there was no formal training for unlicenced assistive personnel. I was encouraged by the nurses there and I subsequently enrolled into the College of the Bahamas for two semesters. It was my mother who provided the financial support for me to enter into the program at Miami Dade Community College.”

After Miami Dade, Theresa enrolled in Barry University where she obtained her Master’s Degree in Nursing. She then achieved a PhD from Florida International University.

Her nursing career has now spanned over two-and-a-half decades, including years as a trauma, intensive care, emergency, and transplant care nurse at Jackson Memorial Hospital, Florida. She has produced research papers on HIV/AIDS, sexual health, gender and masculinity. She has presented her research findings around the world and is published in the West Indian Medical Journal.

She has worked at various universities and hospitals in the United States for over a decade before returning back home. She has taught thousands of her countrymen in emergency response from the Berry Island to Inagua, making life-saving programmes a reality in even remote areas of the archipelago. “I enjoy being a part of the healthcare system in The Bahamas and, however small, I feel like I am making a contribution,” she said.

One of her biggest contributions to the health system was assisting in preparing the School of Nursing for the transition from the College of the Bahamas to the University of The Bahamas. She held a key role in the implementation of the Bachelor’s of Nursing Programme, which replaced the three-year Associate of Science Degree.

As more businesses prepare to open at the end of the current lockdown, Theresa is consulting with many of them to prepare the administrators and owners to implement the necessary policies and procedures to protect their staff and customers. As an expert in her field, she will continue to offer IPC training for all types of business, as well as churches and schools.

Theresa is just as passionate about her family. She and her husband, Donald Smith, have five adult children between them and two grandchildren. She remains committed to her country and the health and wealth of Bahamians, and is doing her part to help her country successfully fight COVID-19

I played doctor as a child. More as a teenager. I’m not smart enough to be a Doctor in real life but I was awesome at it as a teen.