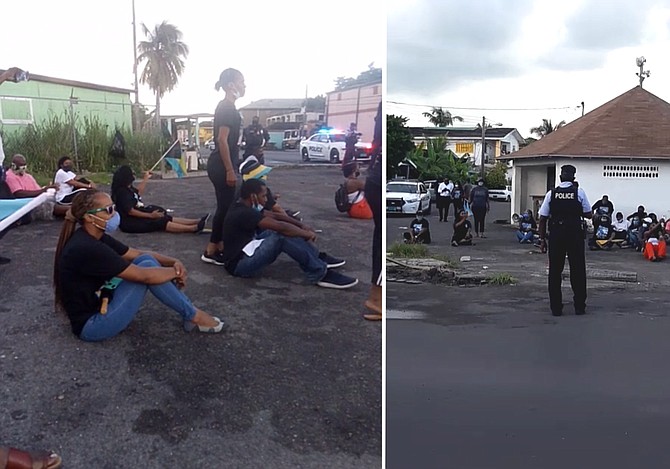 Please note that The Tribune will be available for purchase on Wednesday.

4.55pm UPDATE: A DAY after announcing a seven-day immediate lockdown for New Providence, Prime Minister Dr Hubert Minnis has reversed the harsh measures, allowing food stores, pharmacies, water depots, gas stations and hardware stores to open from 6am to 9pm beginning Wednesday. The announcement came in a statement from the prime minister after the government was roundly criticised by residents, the opposition and non-profit organisations on the impromptu lockdown, which left many without enough food and water in their homes – full story HERE.

4.40pm UPDATE: The Bahamas Chamber of Commerce and Employers Confederation (BCCEC) today said it is "gravely concerned" by a near-total lockdown of New Providence that may ultimately prove "counterproductive" to the Government's health objective – full story HERE.

“We are hoping the abrupt decision to close the food stores will be revisited. The task force was never designed to provide assistance on demand,” the task force chairman told The Tribune on Tuesday – full story HERE.

3.10pm UPDATE: Super Value owner Rupert Roberts says he is seeking permission for his employees to buy groceries on Wednesday after the privilege was granted to employees of the AML Group of Companies despite the seven-day lockdown – full story HERE.

2.55pm UPDATE: A message from The Bahamas Psychological Association with helpline numbers: 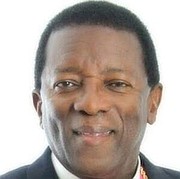 2.50pm UPDATE: Bishop Walter Hanchell of Great Commission Ministries said he sent an email to Prime Minister Dr Hubert Minnis asking him to open New Providence up so people can get food and other necessities – full story HERE. 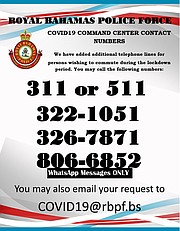 2.35pm UPDATE: The Royal Bahamas Police Force has added additional telephone lines for those wishing to commute during the lockdown period.

2.20pm UPDATE: WITH more than 1,300 confirmed cases of COVID in the country, health professionals are busy deciphering if the latest numbers should be attributed to a backlog of tests or if they are new cases – full story HERE.

1.30pm UPDATE: The Broadcasting Corporation of The Bahamas headquarters reopened on Monday but closed today after a second staff member tested positive for COVID-19. The BCB has said that out of an abundance of caution, additional COVID-19 sanitisation measures will be carried out at its headquarters.

1.15pm UPDATE: Solomon’s Supercentre on East West Highway has reportedly been given permission by the competent authority to open today for AML workers to purchase food. Essential workers from AML are allowed to shop until 3pm Tuesday.

1.00pm UPDATE: Lockdown brings despair for some residents – 40-year-old Desmond Taylor says half a pitcher of water and a few dry goods are all he has for the seven-day lockdown Prime Minister Dr Hubert Minnis implemented Monday night – see full story http://www.tribune242.com/news/2020/aug/18/new-lockdown-brings-despair-some-residents/?news

12.55pm UPDATE: PLP Chairman Senator Fred Mitchell has released a statement with regards to the arrest of protesters this morning:

“I want to thank Bjorn Ferguson and other lawyers who have attended the various police stations to look after the protestors who were wrongfully arrested by the authorities this morning at Windsor Park. They were protesting the imposition of the most recent orders of the Prime Minister.

“I am advised that 50 people are in police custody for alleged protest offenses. They have all been advised to rely on their constitutional rights to silence and to plead not guilty if brought before the courts.

“I take the position that since up to this morning the orders were not gazetted, any actions taken by the authorities in arresting protestors may be unlawful.

“Attorney Damien Gomez Q C is seeking to move the courts to injunct the Government if this is the case.”

Videos of the group were posted on social media, showing a crowd of people walking in the street, some without masks, angered by the government’s sudden lockdown that left many people without time to get adequate food and water to prepare.

Police are at the scene and some protestors have been arrested.

“The Bahamas is becoming a sad place,” protester Demetrius Smith said in a live video shared on Facebook. “It’s a beautiful place full of ugly people, wicked people, selfish people. Today our intentions was to have a peaceful protest, as we walk and came through the communities, some of the officers called me on the side and that’s what caused the uproar, people came out of their homes and started to say things to the officers. . .so (a protestor) has been arrested.”

One woman on the march said protestors had no issue with the lockdown but were angered by the lack of warning from the prime minister, who imposed the restrictive measures Monday night during a national address.

“We are here by Super Value Windsor Park and we are part of Operation Sovereign Bahamas and we have no problem with the lockdown, we know the (necessity) of the lockdown, but we want preparation,” the woman said. “There is no food in the house, no job, we want to be able to be free to move around. We could obey the lockdown but we need preparation, you don’t instantly put people in the cage with nothing to do, that’s why we (are) here.”

Protestor Adrian Francis shared a video on Facebook from a police vehicle, saying he and several protestors had been arrested.

"At some point somebody has to say something about what's happening in the country," he said in the video, as the group was driven to a police station.

Meanwhile, former Minister of Health Dr Duane Sands said in a Facebook post that he has begun a dialogue to ensure people have access to food, water, medications and other basic needs during the lockdown.

And so the rebellion begins, just as Minnis has been planning all along.

haha... good one. The retarded conspiracy theories are taking the world by storm. Soon we will be all injected by Gate's microchips, am I right? The stupidity is boundless.

and yet it is perfectly rational to intentionally deprive and entire population of basic necessities? you sir need to re-evaluate your priorities in life.

Good for them. Lock-down the miserable excuse for a government 😲💥💥💥👏

Pulling out all the stops, very creative way to get away from ‘family’. We have no problem with lockdown & that’s why we’re out here. Yup, not surprising that they have no true bonds - a stranger always has to come up (but hey we’re having fun).

Just another political wannabe trying to get some publicity.

... you may not know this, but some people are hurting and this immediate lockdown has only made things worse! That is what people are protesting!

The PM should not announce lockdown effective immediately knowing full well.that some people did not have a chance to prepare. You have to factor in some people don't have medication, food and water. Some households have small kids, infants even. The solution to a problem isn't to create other problems. We can agree or disagree on lockdowns. But, we can all agree that you should give people a day or two to prepare themselves. This was not thought through and shows his incompetence to govern.

and we are in the middle of an active hurricane season

All that is lacking is a General Douglas MacArthur saying "Rally to me".

There were reports of outdoor parties and social gatherings during the last 2 weeks. Yet, why the police did not do anything about it,if those reports are true. If they complain about people that don't listen,then do something about it at that time. Instead,they lockdown the whole island without warning..So what they basically do is punish everyone else,except themselves of course,for their mistakes.

Coz the Police, and the other law agencies were the ones that were having them!!!!!

I agree with the sentiments behind the protest, but maybe they should have formed a Facebook or Instagram group? One of my biggest concerns going forward to next week is that the queues at supermarkets, food stores and water depots will only make matters worse. And Mr Minnis is now expecting these businesses to keep their refrigeration units on 24/7 so that we will have 'fresh' produce to buy? Madness!!

What is Truth not be ignored?  Will closely observe if Mr. Theodore Minnis's 34 House-elected red coats MP"s be's sufficiently politically wise to digest what a hot cup of tea leaves is communicating when Tribune posts are unanimously not reacting personally critically to Comrade Freddy M?
Just couldn't make this stuff up. Just couldn't. Nod Once for Yeah, Twice for No?

Nobody should have to put with this type of cruelty. This type of action is INHUMANE without compassion for the Bahamian people which brings misery and suffering to their daily lives.

What is going to happen people will be force to limit food, water and other essential needs. This is politically wrong.

You can. I know I have and I've heard other people say the same. Do what you need to do but do it in an orderly fashion. That's all people asking for. We are tired of the panic inducing jerky moves. He didn't consult cabinet on this decision...If that doesn't scare you...

A lot of things in the 242 scares me especially coming from our learned friends and Leaders that's why I stay home now under the bed!!