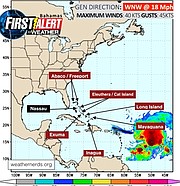 A TROPICAL depression being monitored by weather officials has been upgraded to Tropical Storm Laura.

According to Duty Forecaster Ian McKenzie, based on current projections, Laura’s strongest winds will probably be felt in the Inagua and Ragged Island area.

He added that environmental conditions have still not been the best for the storm to reach its peak in terms of intensity. However, he advised Bahamians to continue monitoring the system as intensity is one of the most difficult things to forecast in a storm.

“Right now, it’s moving southeast Bahamas definitely. In particular Inagua, we’re looking at some impact. Ragged Island possibly but it’s expected the current track will take it south of Andros that will be well south of us and then take it across the keys.” Mr McKenzie told The Tribune on Friday.

“So we’re looking at a timeframe for that. We expect more Sunday. That’d be around early Sunday, say midday Sunday, and then just southwest of Crooked Island and Acklins, which would be more about 50 miles just to the southwest of them approaching Ragged Island area.

“…And then we’re looking at winds around say about 60 miles-per-hour south of them. So the strongest winds would probably be felt in the Inagua-Ragged Island area based on current projections.”

Based on the forecast track, he explained that by Monday afternoon the centre of the storm should over the Florida Keys but clearing conditions are expected by Tuesday.

He further emphasised the models used to track the storm intensity and path have not been agreeing - proving the unpredictability of storms. Hence, his advice for people to monitor the storm.

People on Inagua are making the necessary preparations according to their Island Administrator Marlon Leary.

“We are just waiting to see how the storm plays out,” he said. “We have our shelter managers waiting in case we have to activate our shelters or if NEMA gives the order to activate we’re ready. We have everything in place.

“Since the last storm, people were prepared so they never let their guard down. Everybody knows that this is basically getting into the peak of the storm season, so everybody is continuously watching and doing their best to be prepared to protect themselves, (their) lives, and their property.”

Mayaguana Island administrator Leonard Dames Jr told The Tribune people on his island were doing the same. However, he said there was a level of anxiety on the island.

“The streets are basically sort of clear. We don’t see much persons so the anxiety is high because you know these natural cyclones they tend to have a mind of their own and intensify at short notice . . . Just waiting on the passage of it and for us to really ride it out,” he said.

In terms of readiness, Mr Dames Jr revealed there have been meetings held not only yesterday but a few months prior.

“We would’ve been in meetings since May and in June of this year we were giving all of our notices to the residents and informing them of the beginning of the hurricane season so that they can start making preparations,” he said.