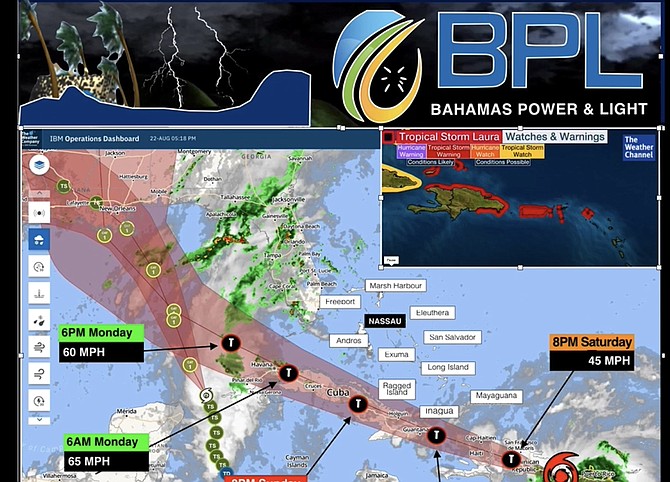 Minister of Disaster Preparedness Iram Lewis said the southeastern islands of the Bahamas are prepared and officials are closely watching Tropical Storm Laura and its track in the Bahamas.

He strongly advised that Bahamians should not take any system lightly because it can change suddenly and strengthen, causing devastating effects.

“The residents in the south-eastern Bahamas are on alert and they have been notified by NEMA,” Mr Lewis said Friday in Grand Bahama giving an update on the storm.

Minister Lewis said that shelters are up and running and that he is in touch with the administrators on the various islands. “They are prepared,” he said.

Mr Lewis has been in touch with officials on the islands of Andros, Acklins, and Crooked Island to ensure they too are ready in the event of a sudden shift or strengthening in the system.

In Grand Bahama, he said that a meeting was held with the Disaster Consultative Committee on Thursday.

“We are ensuring that we have all systems in place in the event that we need to activate,” Mr Lewis stated. “We should never take any system lightly anymore. Andrew came through as a depression, and in a matter of days it intensified to Category Five, causing much devastation,” he recalled.

He also noted that Joaquin, which devastated the southern Bahamas in 2015, developed overnight. “Even last week, we had Isaias, and that was a depression but became a Category One. We are advising residents do not take any system lightly because you never know.”

Mr Lewis stated that his ministry is working closely with the Met Dept, Administrators, the Hurricane Center concerning regular alerts.

He said that residents in Grand Bahama have been able to get themselves prepared. “There are a lot of stores opened up and all the gas stations, banks and laundromats. Every opportunity has been enabled to get residents prepared,” he said.

How many ministers of disaster are there?

Joke of the day.

Uh ... this storm isn’t coming anywhere near the Bahamas, and even if it does the wind speed would be about 35 mph. But, hey, it’s a fine way for the government to distract everybody from its idiotic Covid-19 disasters.

I've never seen so much ado over a non storm in years. It's odd. Travis panicking people in the inner city, Dr Minnis claiming he had an emergency meeting to address it... It's like this govts strategy is "Fear and Panic"