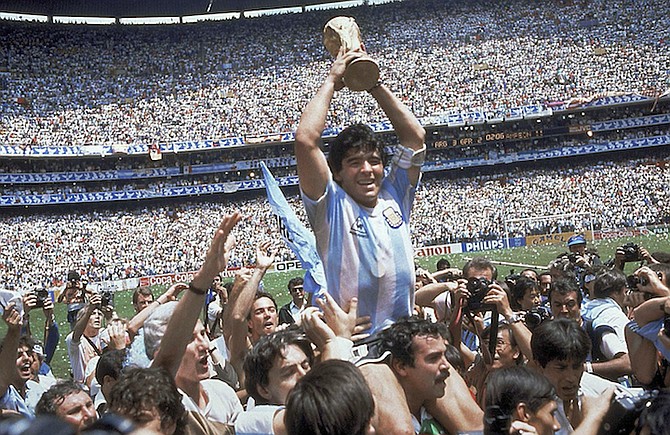 Diego Maradona holds up his team's trophy after Argentina's 3-2 victory over West Germany at the World Cup final in the Azteca Stadium in Mexico City in 1986. (AP Photo/Carlo Fumagalli, File)

For those who feel passionately about football (soccer) and the financial markets, last Wednesday was a bitter-sweet day. Diego Armando Maradona, perhaps the world’s greatest ever footballer, passed away aged 60 following a string of health complications. On that same day, the Dow Jones stock index hit an all-time high, for the first time breaking through the 30,000 points barrier.

Born in Buenos Aires, Maradona was brought up in a slum by parents who often went without food so that Diego and his siblings could eat. His prodigious talent soon got him noticed and it wasn’t long until he signed the first professional contract of a career that propelled him to global stardom and unlikely riches.

The soccer star’s appeal transcended his ability with a ball. He was a charismatic and complex individual, blessed with rare talent but also a tendency to self-destruct, and that, perhaps tragically, enhanced his brand, with the ups and downs of a troubled private life often capturing more headlines than his conquests on the pitch. Still, his contribution to the consolidation of football as a great global business is undeniable.

An interesting episode for those who follow both the financial markets and football happened back in 2005, when Mervin King, then governor of the Bank of England, used one of Maradona’s most famous games, in which he scored twice while playing for Argentina against England during the 1986 world cup in Mexico, to illustrate monetary theory. The first goal, which the referee should have disallowed as it was scored with the hand, summed up the old school central bank approach to monetary policy, it was “unexpected, time-inconsistent and against the rules”.

The second time Maradona scored during that match has been described by many as the goal of the century and it illustrates modern monetary policy: The player ran more than 60 meters with the ball, beating five opponents before scoring.

Mervin King explained that, as Maradona sprinted in a straight line, the English players kept expecting him to swerve and by anticipating a change of direction that never came, created the space that allowed Diego to continue his unstoppable run. Such is the nature of modern monetary policy, explained King: Market interest rates will behave according to the perception of what the central bank is likely to do next; by doing nothing, much can be achieved, as the mere expectation of a rate rise is sometimes sufficient to curb private spending and keep inflation at bay.

Surely one of the most engaging illustrations of monetary theory ever delivered by the head of a central bank.

A final word, on another unlikely run: last week’s Dow Jones new all-time high. Some may be perplexed to see the stock market performing so well when the coronavirus has wreaked havoc on the global economy. They should not be. Such is the nature of the financial markets, always pricing-in the future. In this case a brighter future, without COVID and free of the latest bout of American economic protectionism.