Stateside: Hey Mr Trump, Where's All This Money Going To End Up? 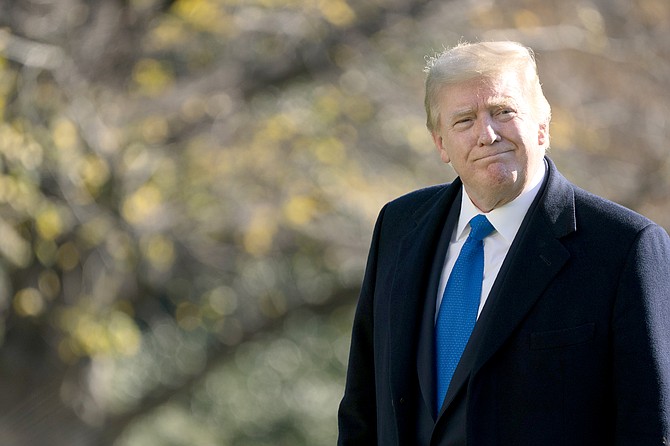 It shouldn’t have really surprised anyone. But it did.

When you consider the chaos, cynicism and confusion in the American government over the past four years of Donald Trump’s crazy presidency, what has been going on in the month after the election that terminated his White House tenure was probably inevitable. But still.

Unwilling to cede to anyone or anything else the front page of big newspapers and the Breaking News crawl on TV, Trump has enlisted squads of attorneys and consultants to challenge and impugn the just-completed election.

Of course, it hasn’t worked. With almost no exceptions, the lawsuits and complaints filed in several battleground states on Trump’s behalf have failed. Often, when these challenges wind up in federal court, they are dismissed, with scathing denunciations, by judges installed during Trump’s administration.

It is turning out that redoing the election may not have been the only point of this seemingly endless exercise. The purpose of all the noisy litigation appears to have been at least partially to raise money for the embattled President, who reportedly owes more than $400 million to various, often foreign, creditors. While the national media were all focused on the silliness and humiliation of such a cascade of defeats for Trump’s peevish refusal to admit defeat, he was quietly tapping his millions of supporters for millions of dollars.

There have been numerous reports that his efforts have netted $170 million since the election, and the fundraising continues apace.

“I need you now more than ever,” Trump pleads in a widely reported fundraising appeal. “Our democracy and freedom are at risk like never before, which is why I’m reaching out to you now with an URGENT request,” Vice President Mike Pence wrote in anther fundraising message. “President Trump and I need our STRONGEST supporters, like YOU, to join the Election Defence Task Force. This group will be responsible for DEFENDING the election from voter fraud, and we really need you to step up to the front lines of this battle.”

These appeals have been significantly successful. Much of the money raised so far is coming from thousands of small grass-roots donors across the country. Some of the funds have reportedly been directed to a leadership political action committee that could be used at his discretion to personally benefit the President after he leaves the White House, according to news reports.

Brendan Fischer, director of a federal regulatory work at the Campaign Legal Centre, which supports greater restrictions on the role of money in politics, said that “small donors who give to Trump thinking they are financing an ‘official election defence fund’ are in fact helping pay down the Trump campaign’s debt or funding his post-presidential political operation.”

Such behaviour by a candidate after an election is hardly unprecedented. Political campaigns rack up massive debt, and in the aftermath of victory or defeat, debts accumulated during the heat of battle must be paid. But the scale of this President’s activity is unusual, and it does fuel suspicions that he is still trying to use his current office to help pay for past bad business decisions.

Getting down to business

President-elect Joe Biden has been naming his senior staff and cabinet choices in a calculated, choreographed process that clearly aims to emphasize diversity while elevating those with whom he is personally familiar and comfortable.

It feels like Biden, in his careful and modulated way, is presenting himself as the anti-Trump. While a couple of his choices, including his pick to head the powerful lead government budget office, have attracted criticism from Republicans, most so far seem unlikely to be seriously challenged for confirmation.

Pundits looking past January 20, 2021 wonder how much the new President will be able to accomplish if the Senate remains in Mitch McConnell’s hands, even if all of his major nominees are confirmed.

Actually, the new President will be able to do a lot.

McConnell himself acknowledged well before November’s election that Biden could fairly quickly undo a lot of Trump administration policies in areas such as the environment, immigration and foreign policy. In a widely quoted remark, McConnell said the only enduring major accomplishment of the past four years would be the appointment of hundreds of conservative-leaning federal judges, including the three new members of the Supreme Court.

But as the American death toll from the coronavirus pandemic passes 270,000 and daily reported infections scarily rise, it seems inevitable Biden’s biggest early challenge will be to manage distribution of the vaccine or vaccines that now seem to be nearing an acceptable degree of reliability in tests.

There are existing contracts providing for government purchase of up to 600 million doses of vaccine. The Coronavirus Aid, Relief and Economic Security (CARES) Act, passed eight months ago long before partisanship precluded further Congressional relief to businesses and individuals, ensures that funding for distribution will be available to the new administration without further reference to McConnell & Company.

Trump and his allies have infamously trivialized the advice of the nation’s leading public health experts on COVID-19, exacerbating the pandemic’s social and economic effects. It turns out that the US Public Health Service Act of 1944 gives broad power to the Centers for Disease Control to step in and impose sensible measures to stem and stifle the spread and impact of this deadly disease. Trump, of course, limited the CDC’s ability to exercise that power. But Biden will let the scientists and experts do their work.

What a concept. After all the malicious nonsense of the past year, many Americans may have forgotten it is possible for federal, state and local governments to intervene at least occasionally in the public interest. Biden is widely expected to unleash the positive power of the federal government to accelerate the extirpation of the virus.

Under the direction of new climate change czar and former senator, Secretary of State and unsuccessful 2004 presidential candidate John Kerry, Biden’s administration is expected to immediately rejoin the Paris Climate Agreement, again without the need to consult with the Senate.

Kerry, since leaving the State Department in 2016, has been a vocal and passionate advocate for mitigating the effects of climate change, and his acceptance of this new position from Biden signals the new administration’s intent to reclaim global leadership on this issue. Reinstalling rigorous automobile fuel emissions standards and regulations on the electricity industry are also expected in the early days of Biden’s presidency.

The often amended Immigration and Nationality Act of 1952 does not oblige Biden to secure congressional approval to restore or expand Obama-era refugee immigration ceilings of around 110,000 per year. (Trump’s administration has limited these to 15,000.) Many observers feel Biden will quickly adjust these ceilings upward.

It is not unreasonable to anticipate that as the pandemic ultimately is neutralized by the coming vaccines and then subsides, the climate for visitors to come to the US will improve markedly.

Won’t that be something to look forward to?

Chasing a title - of sorts

As much as COVID-19 has played havoc with American professional sports this year, it has affected college football much more severely. Dozens of games, many between national powerhouse programmes, have been postponed or cancelled altogether.

The behemoth Big 10 Conference, which reaches from Nebraska to New York City, decided August 11 to scrub its 2020 season altogether, then reversed course five weeks later and is now scrambling to stage a credible December championship game between two division titlists who will have played at least six games. Prohibitive conference favourite Ohio State has cancelled two straight games due to COVID-19 and needs to play its last two to reach the threshold of six.

Oddly, amid all this upheaval and turmoil, the ranking of the four teams who will participate in college football’s annual championship final four play-off has been remarkably consistent. Alabama, Notre Dame, Ohio State and Clemson have monopolized the top four spots all season. Notre Dame has beaten Clemson once already, and the two will likely meet again in the Atlantic Coast Conference title game, so one of them might not make the play-off.

That might open the door for Florida, which has quietly had a terrific season, marred only by a loss at Texas A&M early in October. Untroubled by state government health concerns, the Gators should complete a normal regular season complement of games.