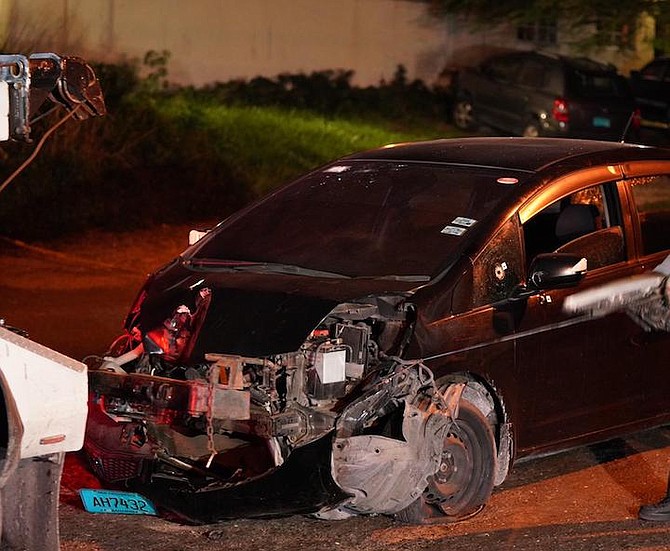 A high-speed chase ended with one suspect in hospital last night after being shot by police.

The shooting happened after officers of a COVID-19 enforcement unit came across two vehicles at the junction of Carmichael and Gladstone Roads firing gunshots at each other.

One of the vehicles opened fire on the COVID unit and sped off which led to a high speed chase involving a number of other police vehicles.

Assistant Superintendent of Police Audley Peters at the scene last night said: “Shortly before 9pm officers from the COVID-19 enforcement unit while on routine patrols in the area of Gladstone and Carmichael Roads, observed two vehicles discharging gunshots towards each other.

“The occupant of one of the vehicles then discharged a firearm at the officers. A chase ensued and while this chase continued police control was informed and other units were alerted.

“The vehicle evaded the enforcement officers.”

Minutes later, however, another police vehicle intercepted a car matching the description In the St Vincent Road area. The fleeing vehicle again opened fire before crashing into a signpost.

Pursuing officers approached the scene as the driver emerged armed with a gun at which police opened fire.

ASP Peters said: “While the suspect was attempting to exit the vehicle, he brandished a firearm and officers, being in fear for their lives, discharged their weapons at the suspect, hitting him.

“EMS was called in. The suspect was transported to the hospital where he is listed in stable condition at this time.”

He added: “There were no injuries to the officers. However, one of our vehicles was damaged by gunfire.”

The injured suspect was taken to Princess Margaret Hospital where his condition is stable.

Did the police act more reckless and irresponsible in this incident than the suspect. The number of vehicles and officers that perused this one vehicle, comprising safety of both the public and officers.

"officers from the COVID-19 enforcement unit in the Gladstone Road and Carmichael Road area SAW the occupants of two vehicles shooting at each other."

maybe shotspotter isn't in the area. @John yes, we have to do better than these brute force car chases.

Your right John and Thisisours. Maybe the officers should had stood in the dark shadows and watch these ruthless criminal thugs cause chaos and destroy our country and quietly shuttled at them asking them to behave and stop trying to kill each other and possibility wounding or killing an innocent bystander or even child. But unfortunately we live in a civil society where when you attempt to or make a criminal offense officers of the law will act and do all they can to bring that person or persons down and protect the life of the people of the Bahamas. Now you maybe upset because they are your criminal family friends and lovers and your so use and relax for them bringing you fast and blood money that they unlawfully took from hard working civil people. Whenever you commit any criminal act especially fire at the police am sure the officers will fire back and chase you down until you are caught. If you dont like how things are done to criminals in a civil country am sure every law abiding civil person will be open for you to move to a country or state where you can live in a wild wild west and do as your please. But living in civilized country tell your criminal friends family and lovers put their guns down stop their reckless killing and robbing stop and maybe they wont attract law officers attention.

Any person who is stupid enough to fire a gun at a police, or any other law enforcement officer, should be shot- dead if possible. Get the scum bags of the streets. I support the police – end of story.

Right on, "viewersmatters. " I don't even like when they say, " Officers being in fear of their lives."

Obviously viewer master has opaque vision or lack of clear understanding. Never did I suggest the police should stand down or in the shadows but that the police should not present an overkill. And to suggest that those involved in the police chase were some relatives of mine demonstrates again the malfunctioning of your drug infested brain.