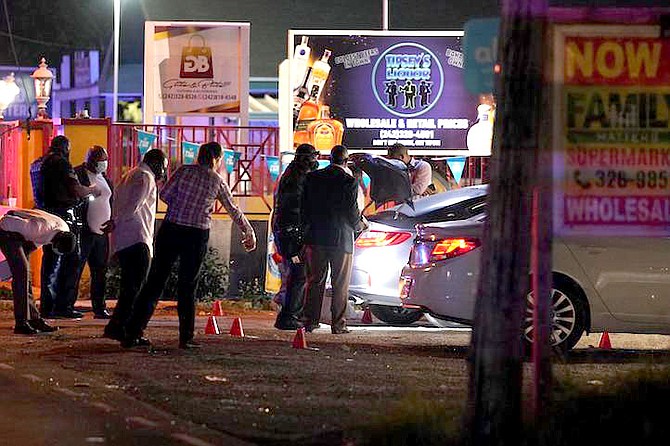 Police are investigating after a man was shot dead on East Street on Friday night.

At around 9.35pm, officers received reports of a shooting at a business south of Soldier Road.

When they arrived at the scene, they met a large gathering outside the business and were directed to the body of the man on the ground.

Emergency Medical Services were called and they pronounced the man dead at the scene.

According to reports, two armed men had got out of a white vehicle and fired in the direction of the crowd, hitting the victim.

Police will await the identification of the next of kin to verify the victim’s identity.

This latest killing came hours after a woman was murdered in the Carmichael Road area.

Terrible, terrible. Why has this become a normal daily event? Where is the public outcry? Why is this not THE MAIN TOPIC in Parliament? For God's sake, why do the the citizens of our Country keep enabling those at the helm?

Well DDK, I think this is partly fulfilling what Christ said in Matthew chapter 24, that things would continue to get worse until He returns... recall when I was a little boy, and it was said that someone was shot or seriously robbed, everyone would ask, "well where in the US did that happen!?" Now its happening right on this little island! Very sad!!!

The reality is as the country struggles to reopen and rebound from Corona, it must now face the harsh reality of violent crime and bloody murder. And it appears that some were ever too anxious for lockdowns to be lifted and curfews to be relaxed so they can get their fingers on a cold, deadly trigger and snuff out the life of some persons who may not even know they were on someone’s hit list. And so what is the country prepared to do after suffering over a decade of double and triple digit murders? It can’t be business as usual. Every murder victim carries with him a part of this country’s future and growth potential to the grave. Forever gone but hardly forgotten. They leave behind weeping eyes, broken hearts, shattered lives and families that can barely heal. Life itself, for many, has died.