Bodybuilders: Closure of gyms hampered our progress at CAC 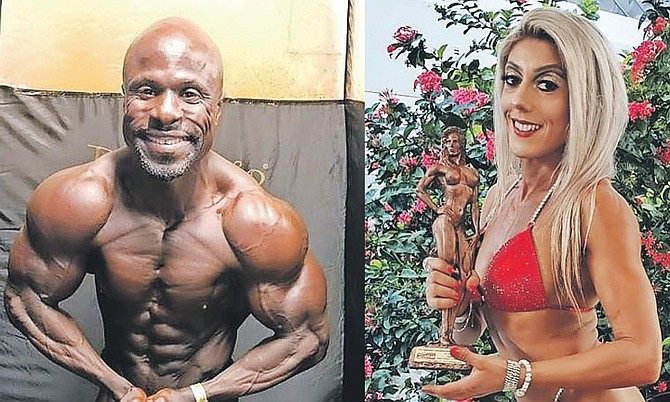 Had the local gyms re-opened before they left for Santo Domingo, Dominican Republic, professional bodybuilder Jimmy Norius felt he would have been in a better position to win the title at the Central American and Caribbean Bodybuilding Championships.

For the first time this weekend, due to the fact that there were limited events staged because of the coronavirus pandemic, the amateurs and professionals competed over the weekend at the CAC Championships.

Norius, the only Bahamian pro to travel with the six-member amateur team to compete in the championships, got second in the Classic Men’s Bodybuilding.

He was the smallest competitor in his group on stage, but he rocked the spectators with his performance as he collected a certificate of achievement from the Elite Pro IFBB and a small cheque to enjoy Christmas.

“The guys who I went up against were top of the line, very impressive,” said Norius following his competition on Sunday.

“It was more competitive than the show in Brazil. I noticed that one guy who competed in Brazil, got third and I second. The guy who got first deserved it.

“But I had a good routine, good support system and the show was rough. I didn’t have access to the gym like I wanted, but I just made use of what I had at home. Even though I came as a pro athlete, I was able to piggyback off of the amateurs. Nardo (Dean) came in the back and he encouraged me to press and Joel (Stubbs) encouraged me.”

However, Norius’ comments cemented those of the other competitors, who felt that the closure of the gyms in the Bahamas hampered their progress.

The 45-year-old Norius, whose wife Serena Salius Decius-Norius was a part of the amateur team, said he will now take the rest of the year off and try to develop more mass so that he can be better prepared for the next show that he is expected to compete in next year.

Norius, who turned pro in 2018, was competing in just his second show for the year, having last appeared on stage in February in Brazil where he was fourth in the men’s classic physique pro division at the Angela Borges Fitness Cup Championships.

In the amateur segment that took place on Saturday and Sunday, Decius-Norius claimed the first medal for the Bahamas with her third place finish in her debut in the Women’s Bikini Short Class. The Bahamas also received bronze from Wellington Wallace and Kaif Young in the men’s Physique Tall Class. Fania Joseph was fifth in the Women’s Bikini, while Jason Johnson and David Dormavil were both sixth.

Dean, assisted by Tim Rolle, served as the head and assistant coaches respectively for the team, which was accompanied by Stubbs, the president of the Bahamas Bodybuilding and Fitness Federation, who along with executive member Brittny Hamilton, participated in the CAC Congress. Stubbs and Hamilton also served as judges.

Decius-Norius, who competed in the NPC Ultimate Grand Prix Bodybuilding and Fitness Championships last month in Florida, said she was delighted to represent the Bahamas for the first time at the CAC Championships.

“I am very proud of myself because I only worked out in my home,” said Decius-Norius, who was trained by her husband, Jimmy Norius. “I enjoyed travelling with the team for the first time in the IFBB because when I last competed, I did it in the NPC. The next time I come back, I hope to do much better.”

Wallace said he was pleased with his performance and all of the Bahamian athletes put their best foot forward, even though they were limited in their training without access to the gyms.

“Other countries made concessions for their athletes, but our athletes were not allowed the same concessions, so I think that was a disadvantage for us,” he said. “Still we put our best foot forward and I felt we did well. I think we still did excellent with the gyms being closed. If they were open, I felt we could have done better. But all in all, we’re still grateful that we could bring some medals home.”

In making his debut at the championships, he said he too was pleased with the effort.

“I feel as if we didn’t have enough time to prepare, due to the fact that we didn’t have access to the gyms,” he reiterated. “We had to work with the little access that we had. But I think the team did very good. I want to thank the Ministry of Sports for the grant in helping us to compete in this year’s CAC and we’re looking for next year, going bigger and better and harder next year if the gyms are opened.”

Joseph said it was challenging preparing for the championships, considering the restrictions that were placed due to COVID-19.

“I wanted to compete this year, so I made an effort to try to get in the best position shape for this competition,” she said. “I thought the package that I presented was the best package, although I only just started competing last year.

“I can most certainly say that I have seen an improvement in my physique. I’m looking forward to getting some feedback from the judges to clarify or to ascertain what it is that I can work on, I can improve to bring the look that the federation is looking for as it pertains to bikini fitness.”

As a crowd pleaser, Joseph said she felt she was more conditioned than her debut last year, despite not getting in the top three. But she said she was happy in getting her body properly prepared under the circumstances and she thanked the federation for affording her the opportunity to represent the Bahamas.

She indicated that she thoroughly enjoyed the experience this year.

Like Joseph, Dormavil said not having access to the gym to train prevented him from performing as well as he had anticipated.

“We could have done better and we have the potential to do better and we have some great athletes that we believe in, but because the gyms were closed, we had to work with what we had,” he said. “We didn’t have any other choice.”