Wells: ‘We’Ll Pay Nurses’ - But He Doesn’T Say When 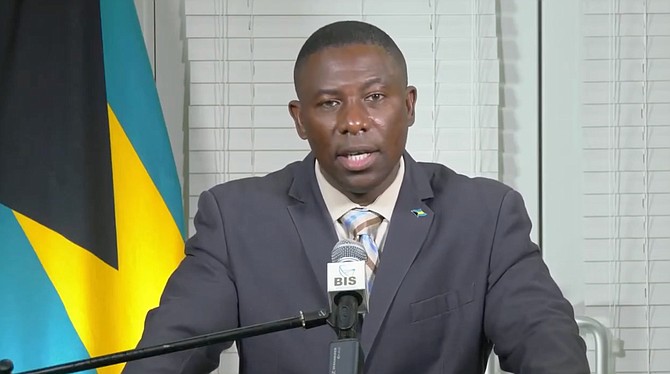 HEALTH Minister Renward Wells has insisted that the government will honour its commitment to provide honorariums to healthcare workers who offered their services during the onset of the COVID-19 pandemic.

However, he would not say when the money will be paid.

This comes after concerns were raised by workers over the issue earlier this week.

On Monday, the Bahamas Nurses Union warned Prime Minister Dr Hubert Minnis that his administration had until December 31 to pay nurses what they are owed for giving service in the fight against COVID.

The union claims the government promised essential workers a COVID-19 stipend as a result of their hard work throughout the pandemic, but have yet to do so – suggesting the government should be sued over the matter. She also said nurses are owed overtime.

Responding yesterday, Mr Wells explained that the government had only agreed to provide a $5,000 honorarium and $100,000 life insurance policy to those frontline workers who from the onset of COVID offered to provide care to infected patients.

“It was not for everybody in the healthcare system,” he said. “Those individuals who made the decision in the midst of COVID when we weren’t sure as to how fast this virus was transmitting, how virulent the virus was... and said ‘we are willing to work with COVID patients’ are the individuals who qualify for the honorary.”

This was not made clear in an April statement released by the Ministry of Health, however, which read: “Despite expected economic fall-out of the mandatory lockdowns, the government has already committed to providing physicians with a $5,000 honorarium for those who work on the frontline of the health sector’s response.

“The government has also offered the provision of a life insurance benefit of $100,000 should a healthcare worker (contract) the COVID-19 virus and experience an untimely death.”

That statement was released in response to COVID-19 concerns expressed by medical workers at the time, who were calling for more personal protective equipment (PPE) to handle patients among other things.

Yesterday, Mr Wells maintained the decision to provide honorariums was made to encourage more healthcare workers to deal with infected patients at a time when COVID-19 fears were rampant in the country.

He told reporters outside Cabinet: “At the start of the COVID pandemic in March, when we had our first case, the then Minister of Health Dr Duane Sands came to the Cabinet of the Bahamas and said that he was having problems finding individuals who were willing to deal with COVID patients upfront in the healthcare system.

“That is what was said. The government of the Bahamas decided that any individual who’s going to step forward in that moment – in March, April or May – to deal with COVID patients, that the government would consider giving them an honorarium up to $5,000.

“In addition, if any of them were to lose their life in the course of dealing with COVID patients as a result of COVID, that the government would pay the family $100,000. That was what the Cabinet of the Bahamas agreed to.”

Mr Wells said as the months went by, more and more workers joined the fight and began providing direct care to confirmed patients in the country.

Addressing the promised overtime to workers, the health minister added: “We’ve paid the nurses the overtime. The doctors, we’re still looking at their overtime and we’re looking for the over time for the support staff. so that’s where we’re at.”

It is not clear how many workers are due to receive the honorariums or when they will receive it, with Mr Wells only telling reporters that the government will make the payments when the country is in a better financial position.

“We are looking at the overall finances of the country,” he said. “Listen, this administration, we haven’t sent home one person from government okay and we have been feeding the Bahamian people, we’ve been seeking to keep the economy of the Bahamas going and when the government is in a position whereby we could meet that part of our commitment because that’s an ex-gratia payment...we will do just that.”

Yesterday, the health minister also sought to address claims from the BNU that money was donated by PAHO and other organisations for essential workers due to their heroic efforts against COVID.

Labelling the information as completely false, the minister said: “That is not true. People need to stop with this fake news and these lies. There was no monies given by PAHO to the government of the Bahamas.

A statement released by PAHO yesterday also reaffirmed this, noting that the organisation is not “an international financial agency.”

PAHO said its mandate is to collaborate and provide assistance with national authorities in development of the health sector.

Hmmm..these ‘warriors’ need more money in order to fight the good fight? It’s a good thing soldiers (who go to war for years and return with missing leg, pinky and toe) don’t demand payments for risking their lives for strangers. Can you say many more terrorists attacks? Thousands more dead and we can’t prepare (those terrorists sure love surprise attacks).

Once heard a true story - ten or so U.S. soldiers were fighting in a foreign country, some of the men in the group died and the others were wounded. Locals of that country found them and risked their own lives to keep them safe (nursed them, kept them hidden). It was later explained it was due to a lifelong code they abided by (believe it was: no matter what - keep the underdog safe from the enemy). All involved became lifelong friends (the U.S. soldiers forever grateful). But other people (we warriors too) only seem to care about money and image (no ethics, morals, many of us vs one of her, etc).

Oh my gosh, you are so stupid. Idiotic, D- Bahamians.