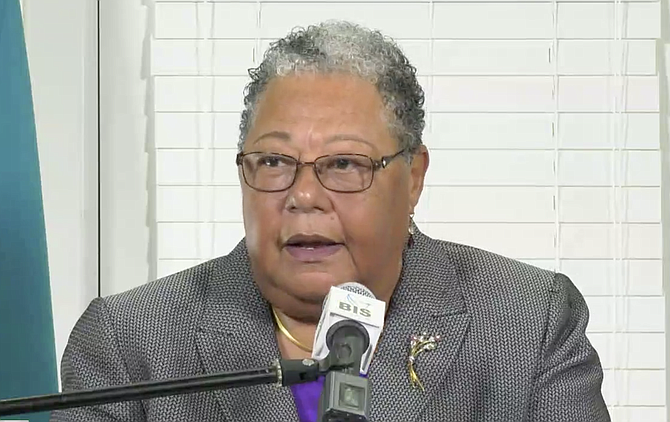 Dr. Merceline Dahl-Regis, O.D., does not suffer fools or viruses gladly. When COVID-19, the worst global public health pandemic in approximately 100 years struck and rapidly spread around the world, the Bahamas needed expert, clear and steady leadership to combat the deadly and highly infectious contagion.

The country required of this leadership a spirit of courage and fortitude, an unyielding resilience capable of confronting one of the worst crises in the nation’s history.

During the U.S. Civil War, though the Union Army enjoyed many advantages, it failed to assemble the military leadership required. Lincoln changed the army’s command structure and replaced a succession of generals before finally selecting Ulysses S. Grant, who helped the Northern states to win the War.

During the COVID-19 pandemic, Prime Minister Dr. Hubert Minnis, as were other global leaders, cast in the role of a Lincoln. In Dr. Dahl-Regis, the prime minister found his Grant, whom he quickly appointed as the Government’s COVID-19 Task Force Coordinator and as his Special Adviser. She is now only his Special Adviser.

Dr. Dahl-Regis’s expertise and experience made her ideal for one of the toughest assignments in her distinguished and exemplary career.

While Drs. Minnis and Dahl-Regis are quite different personalities, they enjoy a common fierce patriotism, a Caribbean sensibility and a deep lifelong commitment to caring for life. The former delivered many children as an obstetrician and the latter cared for as many children as a paediatrician.

As the virus inevitably made its way to the Bahamas, the prime minister and his special adviser shared something else: a theory of the case.

Because of his experience as a medical doctor and as Minister of Health, and because of her vast expertise in public health, including many years as Chief Medical Officer, a degree in public health from Johns Hopkins University and her work and longstanding connections with the Pan-American Health Organization (PAHO), the two doctors grasped the depth of the emerging threat and its possible consequences.

By contrast, a number of other world leaders remained uncertain or dithered or panicked or ignored the threat. While he tried to regain the momentum in the U.K. against the disease, at the outset, according to the Independent, Prime Minister Boris Johnson:

“ … Notoriously skipped the first meetings of the government’s Cobra emergencies committee to consider the novel disease, and then delayed lockdown for weeks after other European countries, boasting of how he was continuing to shake hands with Covid patients even as he was relaying experts’ warnings of the need for hand-washing and social distance.”

At home, Drs. Minnis and Dahl-Regis began to prepare the country for battle. The pandemic, including a punishing second wave, would test the mettle and fortitude of both.

While Dr. Minnis had to lead a full government response, he needed Dahl-Regis to adroitly and aggressively lead the health response. She instilled confidence and a sense of can-do, especially during very dark days.

During the second wave, the worst days of the pandemic thus far, when the daily cases were in triple digits, the health care infrastructure was under tremendous strain, more Bahamians were dying and fear and anxiety continued to mount, Dr. Dahl-Regis’s resolve, and the contact tracing system she put in place and the team she led made all the difference.

Dr. Merceline Dahl-Regis is a singular national hero! Along with other medical professionals, she has helped to save many lives during the pandemic, which will continue for some months to come. She has played a pivotal role.

What made Dr. Dahl-Regis’s leadership compelling is her extraordinary confidence and resolve, gained from a lifetime of knowledge and experience, as well as many natural talents, including a gifted mind and an outstanding capacity for organizing and administration.

But there is also a treasury of personal qualities: compassion, boundless generosity, warmth, steely perseverance, inexhaustible confidence, humility with a touch of delightful imperiousness at times, a sense of humour and other gifts of her human spirit.

Fastidious and careful, she does not brook indiscipline, laziness, incompetence or excuse-making from colleagues from whom she demands the best. She is also kind, but does not suffer gladly the foolish narrowness or petty mind-sets of puffed up bureaucrats jealously guarding their turfs.

Though deeply respectful of authority, she has no problem putting cabinet ministers, senior public officers and self-important officials in their proverbial place if necessary.

Dr. Dahl-Regis rewards her associates with treats ranging from coco plums from her yard to donuts to all sorts of tasty treats. She is an exceptional cook. Yet, she rewards her subordinates with even more.

She has been described by some as an engaging and encouraging mentor who thrills in cultivating and honing talent. She is neither jealous nor intimidated by the talents of others, a defining quality for mentor leaders.

Few Bahamians know much about the woman, with the melodic cadence, command of the facts and at times mischievous twinkle in her eyes, who often dismissed some of the foolish and self-important questions from the press with aplomb and agility.

A PAHO profile of her observes:

“Early in her career, she recognized the vital role of primary health care and universal access to clean water, sanitation, good nutrition and vaccines, and dedicated her work to ensuring the health and well-being of people throughout the Americas and beyond.”

Merceline Dahl-Regis grew up travelling to Cat Island and Long Island, where she spent some summers with an aunt who was a nurse, which helped to spark her interest in the welfare of others, especially in the area of public health. She gained a love of the Family Islands, another trait she shares with the prime minister.

She is the eldest of six siblings and hails from an accomplished family, where education was deeply valued. Teaching and the pursuit of knowledge run in the family.

For more than 20 years, her late brother Dr. Anthony (Tony) Dahl taught at Spellman College where he “served on the faculty in the Department of World Languages and Literature, and as department chair on two separate occasions.”

Dr. Dahl-Regis “completed a residency in paediatrics at Howard University, where she subsequently accepted a faculty position.” While at Howard she worked with developmentally challenged individuals and gained a keen interest in preventative care.

Two of her sisters, Anne Dahl-Smith and Dr. Iva Dahl also served as educators. Both of Dr. Dahl-Regis’s sons are medical doctors.

She was one of the first Bahamian women to become a medical doctor, earning her medical degree from the University of West Indies in the 1960s. She returned home from the United States to take up appointment as CMO in 1997.

She made transformational changes, some of which proved critical during the pandemic, including capacity building in a number of areas.

She also played an important role in reducing infant mortality and established the Adolescent Health Care Centre, which offered a comprehensive and holistic approach to adolescent development.

Dr. Dahl-Regis blended her commitment to the Bahamas with a fierce commitment to regional and global public health, recognizing that diseases and viruses respect no borders.

“In 2010, Dahl-Regis was appointed to chair an international expert committee responsible for verifying the elimination of measles, rubella and congenital rubella syndrome in the Americas. In 2016, the committee declared the Americas free of endemic measles, following a 22-year vaccination drive.”

In 2018, Dahl-Regis was presented with the PAHO Public Health Hero of the Americas Award. PAHO noted of her at the time:

“Dr. Dahl-Regis spearheaded a variety of ground-breaking health initiatives in the region. She was a strong advocate for maternal and child health services, working tirelessly with PAHO’s Latin American and Caribbean Center for Perinatology, Women and Reproductive Health, to ensure improvements in these areas.

“Thanks, in great part, to her outstanding leadership, tireless commitment and holistic understanding of specific country needs and realities, during her tenure the Americas became the first region in the world to be declared free of measles and rubella.

“As well as her work leading efforts towards the elimination of vaccine preventable diseases, Dr. Dahl-Regis’ career was also distinguished by her contribution to the success of the dual Elimination Initiative, which seeks to prevent mother-to-child transmission of syphilis and HIV.”

When she was named the PAHO Public Health Hero of the Americas, she was just the second Caribbean national and the first Caribbean woman to receive this prestigious award.

What she declared at that time are sentiments she would likely offer now:

“This recognition of the work I have done in public health does not belong to me alone. I could not have done it without the contributions of so many, particularly of the health care workers in the field, the staff at all levels, my family, my friends, and lots of faith and prayers.”

It was fortuitous, a special grace and a national fortune to have someone of her caliber, resolve and loving compassion to help lead the Bahamas during some of the most difficult days in the country’s history.

The pandemic has no doubt drained Dr. Dahl-Regis physically and emotionally but she is an indefatigable spirit, a remarkable human being and a Bahamian patriot. She is also this column’s Person of the Year.

As noted in Shakespeare’s Twelfth Night: “[We] can no other answer make, but, thanks, and thanks, and ever thanks.”